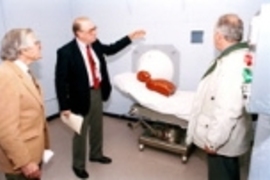 A promising form of therapy for brain cancer and melanoma has a new home at MIT. On Monday, a treatment facility that has been called the best of its kind in the world was commissioned.

Neutron capture therapy, or NCT, involves the selective irradiation of tumor cells in a way that is not achievable using current forms of conventional radiation. In clinical trials it has shown promise in the treatment of glioblastoma multiforme (a highly malignant form of brain cancer), brain metastases and deep-seated tumors on other body sites from melanoma (a malignant form of skin cancer that can spread to other parts of the body, including the brain).

The MIT and Beth Israel Deaconess Medical Center research group, which conducted some of the clinical trials, is considered a leader in the field. The new facility, known as the Fission Converter Epithermal Neutron Irradiation Facility, is located at MIT's nuclear reactor. It replaces a facility in the same location that has been used for 15 years.

"This [new type of epithermal nuclear] beam really puts MIT in a position to make a difference in clinical trials," said John A. Bernard, director of the Nuclear Reactor Laboratory, at the commissioning ceremony in Building NW14.

It was designed and constructed by MIT students, faculty and staff. "The superior performance of the facility is due to use of a fission converter driven by neutrons from the MIT reactor; all other current epithermal neutron facilities directly use the core of research reactors, usually a less efficient process," Professor Harling said.

The new facility, which was funded by the US Department of Energy, "has a capability which closely approaches the theoretical optimum," he said. "Now it's up to the chemists and the clinicians to make NCT work."

"This is a major scientific and engineering achievement," said Dr. Peter T. Kirchner of the Department of Energy, who spoke at the commissioning ceremony. "It assures us at the DOE that our investments in research support reach success when we target the right people."

Patients are first infused intravenously with a special drug that is tagged with nonradioactive atoms called boron-10. The boron-10-tagged drug concentrates preferentially in tumor cells, where it lies in wait. The patients are then exposed to a specially designed beam of "epithermal neutrons."

When the beam is turned on, it passes into the medical irradiation room and is then directed to the patient's tumor. No surgery is required to bring the neutrons to the tumor.

Because the alpha particles travel only short distances -- approximately the length of a single cell -- the researchers expect that if the particles start their flight inside a tumor cell, they will damage the tumor cell and not the normal brain cells nearby.

The success of NCT relies on both the ability of the boron-10 compound to concentrate preferentially in tumor cells and on the neutrons in the beam to reach all malignant cells.

He noted that a radiation therapy such as NCT that targets cells is, in principle, particularly advantageous relative to conventional radiation therapy for microscopically invasive tumors. "NCT has the potential of controlling microscopically diffused disease without major damage to normal tissues," he said. "This is particularly important for the successful treatment of brain cancers such as glioblastoma multiforme."

In May 1999, MIT researchers and medical colleagues at Beth Israel Deaconess concluded a Phase I clinical study of NCT for melanoma and glioblastoma multiforme in the central nervous system and for deep-seated melanoma in the extremities. Phase I trials determined the maximum possible safe level of radiation; they did not have as their primary purpose the demonstration of efficacy.

"These clinical trials showed that NCT could be delivered safely," Professor Harling said. "Trial results also showed that melanoma tumors in the extremities and in the brain showed favorable responses and in some cases appeared to be completely controlled."

The researchers caution that these results have to be repeated many more times before they can be considered scientifically valid. All trials to date have been performed using the 15-year-old facility that the new facility replaces. New trials will begin with the greatly improved new facility after approval is obtained from the National Canc/newsoffice/tt/2000/dec06/reactorbed.jpger Institute.

Dr. Paul M. Busse of the radiation oncology department at Beth Israel Deaconess Medical Center is the clinical principal investigator for the NCT project. He said he is excited about the clinical possibilities presented by the new facility for treating more forms of cancer. "It's like being handed the keys to a Maserati when you're only used to driving an old beat-up Volkswagen," he said.

(Deborah Halber of the News Office also contributed to this story.)

A version of this article appeared in MIT Tech Talk on December 6, 2000.