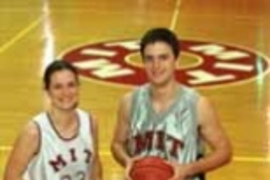 Mr. Heffernan, a 6-foot-7-inch senior from Redbluff, CA, and Ms. Estrada, a 6-foot senior from Bogata, Colombia, led their teams in scoring last year, and both centers were selected for the New England College Basketball Newsletter's pre-season "Dream Team."

She grew up with a slightly romantic idea about MIT and Boston. Her father Jorge Estrada (SM 1966) and mother Roxana met in the MIT lab where Roxana worked back in the 1960s. "So I grew up hearing about how they met and lived in Boston," said Ms. Estrada.

She chose MIT over Georgetown because Georgetown is a Division I school. "I don't know if I would have played there. Here I've been a starter for three years," she said. She stands seventh on the MIT women's all-time points list. Her co-captain this year is Eboney Smith, a senior in chemical engineering.

Ms. Estrada, an economics major, has also kept up a UROP since sophomore year, studying Colombian education vouchers. She's accepted a job on Wall Street after graduation in the sales and training department of a Latin American foreign exchange company.

Last summer during her internship at that company, her roommate said he was going to play basketball with some guys. When she asked him if she could join them, he asked, "Can you run?"

And what's their attitude after they play with her? "We're buddies," she said.

"I had a lot of awkward years; I wasn't the fastest or most coordinated," he said about his early years with the sport.

The 230-pound electrical engineering and computer science major played football, basketball and ran track at Mercy High School, a private school with 160 students in four grades. He didn't consider trying to play more than one sport when he got to MIT.

Mr. Heffernan stands at ninth on the MIT men's all-time scoring list with 1,263 career points. He averages 6.2 rebounds per game, shoots at 55 percent of field goals and 50 percent of 3-point field shots. He was voted Academic All-America last year for his high scores on and off the court.

At the end of the term, the men's team's wins to losses is 6-2. The women are at 5-3. Both teams play Tuesday and Thursday evenings and Saturday afternoons in January and February. Home games are held in Rockwell Cage; admission is free. Check the athletic department's web site for schedule information.