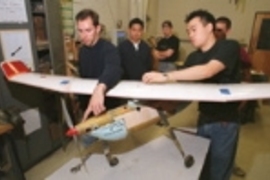 Caption:
Larz Andersen Park is one of the landscape photographs by David Akiba on view in Every Shadow has a Name in the Dean's Gallery. For the past 18 years Mr. Akiba has photographed Boston's Emerald Necklace, exploring the intricate relationship of pond, stream and river to the surrounding landscape while observing both day-to-day weather patterns and the effect of seasonal changes.

An MIT team of young airplane designers flew to Wichita, KS earlier this spring, hoping to bring home a $2,500 cash prize from the American Institute of Aeronautics and Astronautics (AIAA) Design/Build/Fly Competition. Instead they brought home three burnt-out electronic speed controllers, an assemblage of parts from several broken motors, and the honorary Greenpeace Award "for managing to produce air pollution with an electrically powered aircraft."

But the eight aero/astro students remain undaunted. Even though they came in 16th out of 27 college teams, they've retained their enthusiasm and good humor, and they plan to fly again next year.

"Our plane flew as cleanly or better than anything out there. The team easily handled mechanical repairs. We think that with a working powertrain, we would have taken a spot in the top five," said graduate student Larry Baskett, the team's leader.

Entries in the AIAA's Design/Build/Fly contest are electrically powered, remote-controlled, water-bottle-carrying airplanes with a seven-feet maximum wing span, all designed, built and "piloted" by university students.

"With a fully functional power system, we should have been able to fly three loaded laps with four bottles each round," said Mr. Baskett. "This would give us 12 bottle-laps per round, which with our low aircraft cost would place us second. In a perfect round we might have made four loaded laps, which would have put us in first."

Teams were scored on flight points, as well as on their written reports and a "rated aircraft cost" derived from the craft's weight, number of engines and other technical factors. The MIT team scored above the median on the written report (82) and low on the cost (which is good), but problems stemming from faulty motors and burnt electronics arose during the Air Camel's flights.

"At the [two-day] contest, we were extremely happy to have put up one scoring flight. It came at the end of a frustrating day and a half of burnt power electronics and balky motors," said Mr. Baskett. "Given the huge amount of work (on the order of 1,500 student hours) put into the plane, we wanted to place well."

No doubt the Air Camel would have done superbly if not for the engine problems. After all, MIT students are known for their design flair, and their work on Air Camel was no exception. Named after the desert camel (another "water-carrying thing," said Mr. Baskett), the Air Camel was the only plane equipped with glued-on toy eyes, giving it by far the most personality of any machine on the runway.

The single-engine monoplane has a seven-foot wingspan, is five feet long and weighs about 10 pounds without the water bottles. The fuselage is crafted from Kevlar, the wings are foam with a carbon-fiber structure and the landing gear is made from carbon fiber.

"To have a reasonable shot at top place, two to three months of flying practice is pretty much a requirement," said Mr. Baskett. But that's not how it worked with the Air Camel. The team finished building the plane just a few days before the competition and tested it at Sudbury Field. They got one good flight, made some alterations and then hit the road, so to speak.

Flying with the plane proved difficult. The Camel was packed in a large box that went with the baggage. When they changed planes, junior Bernard Ahyow watched as the box got tossed around with the rest of the baggage, despite the fragile stickers. On the return trip, airline personnel insisted that the box wouldn't fit. The team finally prevailed upon an airline employee to take the box down and try it. It fit and the Air Camel safely flew back to campus.

Students of any major who wish to be involved in next year's project can contact Mr. Pilkington at lopilk@mit.edu.

The Design/Build/Fly contest is sponsored by Cessna Aircraft and the Office of Naval Research. MIT's Department of Aeronautics and Astronautics sponsored the student team through membership in the AIAA. A portion of the team's travel costs was also covered by the department's Shapiro Award for undergraduate projects.