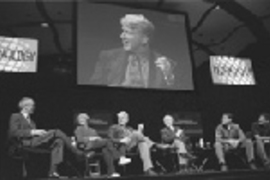 MIT affiliates make up more than a quarter of the TR100, Technology Review's compilation of the world's best young innovators, with six faculty members, one graduate student and 20 alumni/ae showing up on the list of 100 men and women under age 35.

The list was published in the November/December issue and publicly announced last Thursday in a day-long celebration of the magazine's 100th anniversary that included an afternoon symposium hosted by journalists Bill Moyers and Lesley Stahl.

The 100 were placed in five categories: hardware, software, telecommunications and the web, biotechnology and materials science. For a list of judges and short write-ups on each of the 100, see Technology Review's web site.

Yoel Fink, a 33-year-old graduate student in materials science and engineering, was one of the TR100.

"I felt like a dwarf among giants," he said about being named to the list. "It's a great honor. It's supposed to gauge people who have potential, in that respect I might fit in."

Steven Leeb, 34, the Carl Richard Soderberg Associate Professor of Power Engineering in the Department of Electrical Engineering and Computer Science, was another MIT affiliate on the list.

"It was very humbling. It was an amazing crowd to be sitting with; I was starting to feel old. Many people in their twenties had already started companies," said Professor Leeb, who added that he got autographs from both Lesley Stahl and Bill Moyers during the day's well-run and highly-polished events.

Peter Seeberger, an assistant professor of chemistry who was named in the field of biotechnology, said of the symposium, "It was most impressive. I think they did a tremendous job of putting on a good show. It felt like real TV.

"As someone there said, 'usually the sports stars are the heroes. But on that day the technerds were the winners.' It made me feel pretty good about myself," said Professor Seeberger.

"The Innovations Conversation," as the symposium was called, turned Kresge Auditorium into a TV studio for a live webcast on CNBC. The symposium consisted of three "conversations" among the five to eight panelists selected for each topic, all moderated by Mr. Moyers.

While he and the panelists sat in a semicircle on the brightly lit stage, the audience sat in a darkened auditorium watching the interaction between panelists or viewing the speakers one at a time in closeup shots on the large, compelling video screen that hung overhead.

Following each of the approximately 30-minute discussions, Ms. Stahl stood in the aisles of Kresge and addressed the panelists with written questions from the audience, much as a talk show host wades through the seated crowd with a microphone.

Panelists for the first and very lively conversation about "The Making of a Successful Entrepreneur" were Mark Cuban, president and co-founder of Broadcast.com; Marleen McDaniel, chair and CEO of Women.com Networks; Robert Metcalfe (SB 1968), vice president of International Data Group; Jeff Taylor, founder and CEO of Monster.com; and President Charles M. Vest.

When asked by Mr. Moyers to list the telltale signs of a successful entrepreneur, Mr. Metcalfe named persistence and described seeing a certain passion for the idea in those who make it.

"I can begin to tell when I've seen them for the sixth or seventh time. It's also about the time I begin to figure out what they're talking about," said Mr. Metcalfe.

The panelists said that in the past 20 years, the qualities one needs to be a successful entrepreneur have changed, in large measure because of the web.

"Before, there were gatekeepers," said Mr. Cuban, referring to the bankers and lawyers who once controlled access to capital. Now there's the Internet. When he started Broadcast.com, he said, "I didn't even have a business plan."

Marleen McDaniel, a self-proclaimed "habitual entrepreneur" who has started six companies, described entrepreneurism as a calling. "The call to bring new technologies forward" was much more compelling than the call to take care of more individual demands, she said. Successful entrepreneurship requires an "aggressive, persistent tenacity. It takes a lot of guts."

"It's hard to intellectualize entrepreneurship," said President Vest. "So you create a culture that says entrepreneurship is important to society. You provide mentoring, then let it run."

Mr. Cuban said, "I retired at age 31. People always said to me, 'You're going to be bored.' But I say, there are six billion people in the world and I've only had a beer with about a thousand of them. The easiest thing to do is to keep motivated."

The second group of panelists, for "Capitalizing Innovation," included four from the TR100 list. Panelists for the third conversation, "Emerging Technologies, 2000-2010," included Institute Professor Phillip Sharp of the biology department, and Profesor Neil Gershenfeld of the Media Lab.

A version of this article appeared in MIT Tech Talk on November 10, 1999.