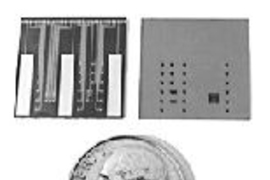 ↓ Download Image
Caption: Front (left) and back views of a new microchip for the controlled release of chemicals. The dots between the three large bars (cathodes) on the front are the caps (anodes) covering the reservoirs that hold chemicals. An electrical voltage applied between a reservoir cap and a cathode causes a reaction that dissolves the cap, releasing the chemical. The back view shows the larger openings for each reservoir through which chemicals are deposited (these openings are sealed by a waterproof material after the reservoirs are filled.)
Credits: Photo / Paul Horwitz, Atlantic Photo Service, Inc. 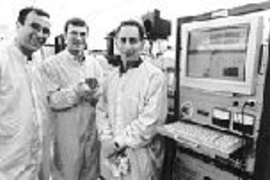 Caption:
Front (left) and back views of a new microchip for the controlled release of chemicals. The dots between the three large bars (cathodes) on the front are the caps (anodes) covering the reservoirs that hold chemicals. An electrical voltage applied between a reservoir cap and a cathode causes a reaction that dissolves the cap, releasing the chemical. The back view shows the larger openings for each reservoir through which chemicals are deposited (these openings are sealed by a waterproof material after the reservoirs are filled.)
Credits:
Photo / Paul Horwitz, Atlantic Photo Service, Inc.

CAMBRIDGE, Mass. -- Ask John Santini, Michael Cima, and Robert Langer about potential applications for the microchip they're reporting in the January 28, 1999 issue of Nature, and settle back for an enthusiastic tour of a future that could include jewelry that emits different scents depending on your mood, and "pharmacies" that could be swallowed or implanted under the skin and programmed for the delivery of precise amounts of drugs at specific times.

The chip behind their excitement is the first of its kind: it can store and release different chemicals, on demand, from tiny reservoirs built into its silicon structure. Apply a small electrical voltage to a given reservoir, and the thin gold cap covering it dissolves, releasing the chemical inside.

"The Nature paper shows that this basic concept works," said Dr. Cima, Sumitomo Electric Industries Professor of Ceramic Processing. "The next step is to do the engineering to make this into a real application."

The dime-sized prototype contains 34 reservoirs, each the size of a pinprick and capable of holding about 25 nanoliters of chemical in solid, liquid, or gel form. "But there's room for over 1,000 reservoirs, potentially thousands more if you make [the reservoirs] smaller," said Dr. Langer, the Kenneth J. Germeshausen Professor of Chemical and Biomedical Engineering. He added that "the reservoirs and microchips could both be made much larger or smaller, depending on the desired application."

The prototype chip testing apparatus also contains 34 wires connecting the circuitry of each reservoir to an external power source. The researchers say that it should be possible, however, to make a device that's completely self contained. This would include fitting the chip with a small battery and a microprocessor. The chip could then be either preprogrammed for the release of chemicals, triggered by remote control, or activated by an on-chip biosensor.

The chip could also be cheap. "We're making them right now in a research lab for about $20 each," Professor Cima said. "With process optimization and larger batches, I could easily see making them for a few dollars each, or even less."

BACK TO THE FUTURE

Back to the future and potential applications. "What about diagnostics?" said Mr. Santini, a graduate student in chemical engineering. He noted that many diagnostic tests today involve adding precise amounts of chemicals in a precise order to fluids like blood and saliva. As a result, samples must be sent to a lab, where it can take hours to days for results. A microchip preprogrammed to release the proper chemicals at the right times and in the right order could be fitted to the end of a probe, swirled in a vial of fluid at the bedside, and deliver the results as the patient waits.

"And what about jewelry that releases different scents based on your mood?" said Professor Cima. In this case, a biosensor on the chip would convey information about, say, the salinity of your skin to the microprocessor, which would activate certain reservoirs. Similarly, "a microchip in TVs could possibly someday release different scents keyed to an advertisement or scene," said Professor Langer. In this case the chip would be triggered by remote control via a signal sent over the airwaves.

Other applications lie in drug delivery. Most implants and patches currently on the market deliver drugs continuously over time; the new chip would "allow you to control not only the amount of drug released, but also the exact time of delivery," Mr. Santini said. For example, some infertility treatments require wearing a small pump that delivers pulses of certain hormones every 90 minutes for weeks at a time via a catheter inserted through the skin. Those hormones could potentially be incorporated into a chip that is implanted under the skin and programmed to release the contents of specific reservoirs at specific times.

"The applications, I think, are unlimited," Professor Langer said. "The question is, which are the best ones?"

In the new chip, a reservoir is opened by applying a small electrical voltage between the reservoir's gold cap (the anode) and another gold structure (the cathode), which causes a current to flow between the two. The cathode remains intact during this process, but the anode dissolves due to an electrochemical reaction between it and the salt solution it is bathed in. (Mr. Santini notes that the team has ideas for future versions of the chip that won't have to be in solution.) With the anode cap out of the way, the chemical inside is liberated.

The researchers have demonstrated this for multiple chemicals in separate reservoirs. In other words, they applied a small voltage between a reservoir containing chemical A and a cathode and observed that chemical's release, then at a later time did the same for a reservoir containing chemical B with the same results. They did this for several different reservoirs filled with one or the other chemical over a period of several hours. This shows "that multiple compounds can be released independently from a single microchip device," the trio write in Nature.

Talking about the development of the chip, which took five years, Mr. Santini said "there was never a sudden 'voila.' Rather, it was a steady progression. We encountered numerous challenges along the way such as material selection, reservoir filling, and structural design issues, but we were able to develop solutions for each of these. We had a feeling it would eventually work, but it took a while to realize [a functioning chip]."

Bob Langer got the idea for the new device while watching a documentary on mass-producing microchips. "I thought, 'that would be neat to apply [microchips] to chemical or drug delivery," said Professor Langer, who is well-known for his work on polymers and implants for drug delivery. "I immediately thought of Michael [Cima], and told one of my students to call him ASAP about it." (Professor Cima is an expert on forming technologies such as those used to form the microchip.)

Professor Cima, in turn, thought the project might be a good one for a student in the MIT Materials Processing Center's Summer Scholars Program, which currently invites 10 outstanding undergraduate students from universities around the country to participate in ongoing materials research at MIT.

Enter Mr. Santini, who was one of four Summer Scholars in 1993. "All of us in the program went around to 16 professors in two days to hear presentations from each on their research and the projects we could work on," said Mr. Santini, then a junior at the University of Michigan. "Michael's description of the microchip idea made an impression. I thought, 'Hey. This is interesting.'"

But when the summer was over, the project was not. So Mr. Santini came back to MIT a year later as a graduate student, with the microchip the focus of his doctoral thesis. "Summer Scholars projects are supposed to take five to six weeks to complete. Little did [the administrators know] that mine would take five years!" chuckled Professor Cima, who pointed out, however, that most Summer Scholars don't end up with a paper in Nature and a patent. (Santini, Cima, Langer, and Achim M. Gï¿½ï¿½pferich, an MIT visiting scientist during the early stages of the project now at the Lehrstuhl Fï¿½ï¿½r Pharmazeutische Technologie Universitï¿½ï¿½ï¿½ï¿½ï¿½ï¿½t Erlangen-Nï¿½ï¿½rnberg, were granted a broad United States patent covering the microchip technology on August 25, 1998.)

With a prototype chip in hand, what's next? "We want to do the engineering to make this into a real application," Professor Cima said. "Also, we want to better characterize the gold dissolution process. We're filling in the details right now."

The new microchip was constructed at MIT's Microsystems Technology Laboratory. The work was funded in part by the National Science Foundation.