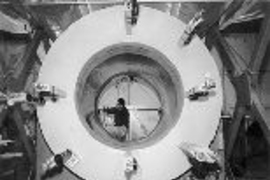 ↓ Download Image
Caption: This 40-ton magnet completed by a US engineering team (photographed at a Lockheed Martin plant in San Diego) is key to an international experiment on nuclear fusion.
Credits: Photo / Ken Blum

Caption:
This 40-ton magnet completed by a US engineering team (photographed at a Lockheed Martin plant in San Diego) is key to an international experiment on nuclear fusion.
Credits:
Photo / Ken Blum

CAMBRIDGE, Mass--A United States engineering team led by MIT has completed a 40-ton magnet that, when combined with a similar magnet in Japan, will serve as a testbed for the researchers' ultimate goal: a magnet weighing 1300 tons that will be key to an international experiment on nuclear fusion.

Some of the technologies behind the US magnet could also have other applications. For example, it employs novel superconducting cables wound into a coil that could be adapted for energy storage or to stabilize disturbances on a power grid.

This week the magnet will leave the US on a ship bound for the Japanese Atomic Energy Research Institute (JAERI). Once it reaches Japan sometime in April, the magnet will be installed with another superconducting solenoid module manufactured by Toshiba Corp. for JAERI. When combined, the modules will form the world's most powerful pulsed superconducting magnet, weighing over 150 tons.

The purpose of the combined magnet, called the Central Solenoid Model Coil (CSMC), is to demonstrate superconducting performance parameters and manufacturing methods for the full-size magnet planned for the International Thermonuclear Experimental Reactor (ITER) project. ITER goals include demonstrating the feasibility of nuclear fusion as an attractive energy source and demonstrating the availability of the technology required for a fusion power reactor. The 1300-ton ITER magnet will provide the magnetic fields needed to initiate and sustain the plasma, or electrically charged gas, necessary for the generation of energy from the fusion reaction.

Once the US and Japanese test modules are joined "we'll conduct a series of tests to show that the magnet can do what it's designed to do. We also want to find its performance limits," said Joseph V. Minervini, head of the MIT CSMC team and a Principal Research Engineer at MIT's Plasma Science and Fusion Center (PSFC) and Department of Nuclear Engineering.

Some 20 PSFC researchers were involved in the work, including David A. Gwinn, who was in charge of overall fabrication, and William K. Beck, who led manufacturing operations in Hingham, Mass. MIT's partners on the US CSMC team are Lawrence Livermore National Laboratory (LLNL) and the Lockheed Martin Corporation (the prime industrial contractor). Dr. Raghavan Jayakumar, a Visiting Scientist to MIT from LLNL, served as the US CSMC Program Manager.

In building the CSMC, the engineers surmounted several technological challenges. For example, the superconducting material used in the device "has a higher performance than other [types of superconducting materials], but it's harder to manufacture," Dr. Minervini said. The challenge was to "make the basic material itself in large quantities and to high technical specifications." Eventually some 30 tons of the material were produced.

Dr. Minervini emphasized that the wire made from this material was manufactured in the US, Europe, and Japan. "So even though the CSMC inner module [the Japanese built the outer module] was built in the US, this was really an international collaboration."

MIT engineering has been key to how those wires, in turn, are arranged to form the magnet. As Dr. Minervini explained, over 1,000 wires are twisted into a cable. Six such cables are then clustered around a hollow tube, and the whole arrangement is inside a square tube that's two inches on a side.

The resulting device, known as a cable-in-conduit conductor (CICC), is then wound into a coil resembling a giant spring that makes up the bulk of the magnet. The initial concept for the CICC "was developed at MIT more than 20 years ago," Dr. Minervini said. "The CICC is now the conductor of choice for large-scale magnets." (He also noted that the CICC construction concept is currently used to make the high-temperature superconductors for power-transmission lines.)

The material that the CICC square tube is made of is another MIT invention. Developed by Professor Ronald G. Ballinger of the Departments of Nuclear Engineering and Materials Science and Engineering, "the tube material has special properties to withstand the processing conditions for the magnet," Dr. Minervini explained.

The wedding of the US and Japanese magnets marks nearly four years of intense research and development activity by an international scientific team in the United States and Japan as part of the Engineering Design Activities (EDA) phase of ITER. Partners in this collaboration are the European Union, Japan, the Russian Federation and the United States.

The six-year EDA was successfully completed in July 1998 and the European Union, Japan and Russia have extended their commitment to the ITER EDA for an additional three years.

The CSMC fulfills the United State's commitment to its ITER partners. In FY-1999, the US Congress appropriated funding for US completion of the delivery and testing of the CSMC but not for an extension of US participation in ITER beyond completion of its R&D commitments.

"ITER activities have provided US industry with the opportunity to participate in developing the technology of fusion energy. With industry involvement we gained keen insight into the manufacturability of complex components for future fusion systems," said Charles Baker, the US ITER Home Team Leader. The US ITER Home Team was hosted by the University of California, San Diego, and under Dr. Baker's leadership coordinated the participation of over 40 US national laboratories, institutions and industries in ITER design, research and development.

The US CSMC program was funded by the US Department of Energy, Office of Fusion Energy Sciences, primarily through a multi-year grant to MIT. Other support came from more than 20 US industries.