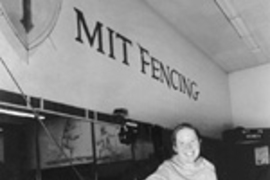 CAMBRIDGE, Mass. -- MIT student Caroline Purcell took the gold medal October 17 in the sabre competition at the Junior/Cadet Pan American Fencing Championships in Porto Alegre, Brazil, defeating another US sabreist for the title.

The 19-year-old sophomore in civil and environmental engineering also helped the US team win the team relay competition. She was the only MIT fencer at the tournament.

"It was a small competition -- I only had 11 competitors in sabre, which came out to about one per country present. In the gold medal bout, I fenced the cadet [under 17] sabreist from the US," said Ms. Purcell. The cadet wound up second; Brazilians took both third and fourth place.

The New York City native, who has been fencing since age 11, chose MIT for both its engineering coursework and its fencing team, coached by Jaroslav Koniusz. She practices with the MIT team two hours a day, five days a week, and on her own another four to six hours.

"I've been fencing for so long that it's become part of my life. I can't say if I didn't fence I could do other things. It's just something I do. I wish the days were longer," she said.

As for the academic side of MIT, she said, "I love it here. It's so much fun. It's a ton of work but it's worth it." She chose to study engineering because as a child she wanted to be a doctor. Then she discovered her eye doctor was also an engineer, and she found that intriguing.

"Engineering teaches you how to analyze things. It's basically helpful in every walk of life. I just like math and science a lot -- or I did before I got here and realized how hard it is," she said with a laugh.

Ms. Purcell started fencing to keep up with her older brother and his friends -- who took lessons at a local gym -- and kept it up though high school, even while playing varsity soccer. "I liked doing it. I liked knowing I could do it well," said Ms. Purcell.

Although she started with the foil as her weapon of choice, she quickly switched to sabre to have more competitors. Using the sabre -- a long, thin weapon with a straight blade -- she competed against her brother and his friends.

"Sabre comes from cavalry fighting, where they were whacking at the person to knock them off the horse," she said. "So the target area is the waist up." By contrast, the target area for foil is torso only (no arms or head). "The foil comes from actual dueling where you want to hit somebody by piercing the heart or lung with the point of the blade."

The sabre proved to be a good match for Ms. Purcell's technique. "Even when I practiced foil, I still hit flat. I don't know if it was just messy fencing or some hidden thing telling me to do sabre," she said.

The third weapon is the epee, which "comes from dueling where you want to draw first blood. You can hit anywhere with just the point. Since the hand is also a target, the epee has a large hand guard," said Ms. Purcell.

Fencing is one of the oldest intercollegiate sports at MIT, tracing its roots back to 1896. MIT currently sponsors both a men's and women's team in all three weapons; the women's team was started in in 1974. While more than 40 students participate in MIT's competitive intercollegiate fencing program, others take fencing classes as a physical education activity.

Women have been competing nationally and internationally in sabre only about six years; about 500 women now compete worldwide. This will be its first year as an NCAA sport, and in November, the first women's sabre world championships will be held in Seoul, Korea. Ms. Purcell hopes to see it become an Olympic sport in 2004.

She's traveled to many competitions over the years, both in the US and abroad, always accompanied by her father. "He's basically my manager. He makes sure I get enough sleep and eat right," she said. "He babies me, but only at competitions. Otherwise he's pretty strict with me."

What does it take to be good? "You have to like doing it, and to be able to concentrate on what you're doing and on your opponent," she said. "You need quick reflexes and good balance. Everything else, like good footwork and blade work, you can learn."