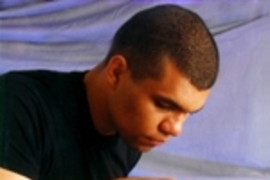 CAMBRIDGE, Mass. -- Whoever invited Alex Slocum to give a talk for Ford Motor Company engineers two years ago deserves a raise.

The talk, which summarized ongoing research in Professor Slocum's MIT mechanical engineering lab, sparked a collaboration that has led to an invention that could cut manufacturing costs for many automotive engines and is the grist for an MIT PhD thesis. The frosting on the cake: a 1999 R&D 100 Award, shared by Ford, MIT, and Aesop, Inc., which the researchers received at a ceremony in Chicago September 23.

Dr. Slocum, a MacVicar Faculty Fellow, has now won nine R&D 100 Awards, which honor the 100 most technologically significant new products of the year.

TO BUILD AN ENGINE

The current award-winning invention is a new way to align one or more components of automotive engines with extreme precision. Such an operation is critical to engine performance. In the production of an engine the two main components are bolted together and a hole is machined lengthwise between the two. Then the two halves are taken apart again to put in the crankshaft and bearings that fit within the hole.

"When the halves are reassembled (with the crankshaft and bearings in place), it's important that they are lined up to within five millionths of a meter of their original bolted position, or the engine will not work properly or possibly fail," said Martin L. Culpepper, the graduate student in mechanical engineering who is a co-winner of the R&D 100 Award with Professor Slocum, Robert Rines of Aesop, Inc., and F. Zafar Shaikh, Joe Schim, and Gary Vrsek of Ford. The inventors will also be presenting a paper on the work at a November meeting of the American Society of Mechanical Engineers.

Currently, engine manufacturers solve the alignment problem by machining eight holes into each of the main engine components, then fitting them together via dowel pins inserted in the holes. Among other drawbacks, "this design is costly to manufacture as it requires machining/gauging of 16 precision holes and eight hollow dowel pins," Professor Slocum said.

"The pin-hole technique has been used for centuries to attain precision alignment," Mr. Culpepper said. "Our design could totally change this way of thinking."

In the new patent-pending approach, which the researchers have dubbed the Kinni-Mate Coupling, the two major engine components are aligned via three spherical pegs that are pressed into one of the components (the pegs replace the traditional dowel pins). The pegs then "mate" with three corresponding conical holes in the other component. (These holes can be machined with grooves around the edges, which can improve the performance of the Kinni-Mate.)

Among the benefits: Kinni-Mate Coupling is one third cheaper than the current method for aligning engine parts, in part because it employs fewer pieces (e.g., three pegs versus eight dowel pins). It can also be easily integrated into the existing manufacturing process because the inventors have developed a novel method for machining the new features with a modification of the old tooling.

Mr. Culpepper, who is writing his PhD thesis on the Kinni-Mate, noted that the concept has already seen limited use by Ford. "The company is currently taking the necessary steps to place it into full production," he said.

Mr. Culpepper and Professor Slocum have applied for two patents on the Kinni-Mate Coupling. The work was funded by Ford.