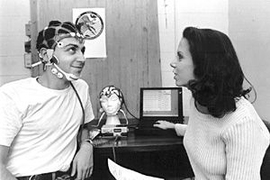 ↓ Download Image
Caption: Luca Callini, who just received his master's in aeronautics and astronautics, and aeronautics and astronautics graduate student Suzanne Essig, far right, worked with Professor Larry Young on an experiment that will go up on the shuttle with astronaut John Glenn later this week. The MIT experiment is actually an artificial-intelligence system that will aid another experiment on sleep, in which the astronauts will be fitted with the same head gear Luca is wearing. The laptop in the center displays and analyzes physiological signals coming from the instrumentation he is wearing.
Credits: Photo / Donna Coveney

Caption:
Luca Callini, who just received his master's in aeronautics and astronautics, and aeronautics and astronautics graduate student Suzanne Essig, far right, worked with Professor Larry Young on an experiment that will go up on the shuttle with astronaut John Glenn later this week. The MIT experiment is actually an artificial-intelligence system that will aid another experiment on sleep, in which the astronauts will be fitted with the same head gear Luca is wearing. The laptop in the center displays and analyzes physiological signals coming from the instrumentation he is wearing.
Credits:
Photo / Donna Coveney

CAMBRIDGE, Mass -- A scientific "assistant" developed by MIT researchers and colleagues is key to an experiment on sleep to be carried out on astronauts John Glenn and Chiaki Mukai during the shuttle mission scheduled for liftoff this Thursday.

The assistant, a computerized artificial intelligence system, will help ensure that the astronauts properly don and activate the electrodes, wired vests, microphones and other equipment that will measure various parameters as they sleep. Its feedback, which includes red and green signals indicating the status of connections and trouble-shooting procedures if something is amiss, is important because the scientists who designed the experiment won't be available to check the set-up. Further, the study comes at the end of a long day when there's more probability for simple mistakes that could jeopardize data collection.

Dubbed the Principal Investigator-in-a-Box, or [PI] for short (the brackets represent the box), the system was created to "capture the reasoning power of the scientist doing the experiment when that scientist is not physically in contact with the experiment," said Laurence R. Young, Apollo Program Professor of Astronautics and principal investigator for the system. He explained that although astronauts are highly trained, they cannot be experts on every experiment they conduct. [PI] helps them make decisions that might otherwise require consultation with the machine's human counterpart.

For the same reasons [PI] could also be useful for studies in remote areas on Earth, and has particular relevance for long-term missions aboard the planned International Space Station. "It would be nice to have if you're an astronaut going to Mars and it's been six months since you last practiced the research protocol for a given experiment," said Susanne M. Essig, a research assistant on the [PI] project and graduate student in the Department of Aeronautics and Astronautics.

This will be the third time in space for the system. Earlier this year it flew aboard the Neurolab mission where it supported the first execution of the sleep study, led then and now by Dr. Charles A. Czeisler of Harvard Medical School and Brigham and Women's Hospital. An earlier version of [PI] went to space in 1993. On that mission it supported an experiment by MIT researchers and colleagues on the human balance system.

For two nights at the beginning of the flight and two at the end, astronauts Glenn and Mukai will don the instrumentation that will detect parameters related to their sleep and respiration. (Dr. Mukai will also take a capsule of melatonin, a sleep aid, to determine if it improves the quality of her sleep. Senator Glenn was disqualified from this part of the experiment for undisclosed reasons.)

After the two are outfitted, astronauts Stephen Robinson and Scott Parazynski will plug the apparatus into a digital sleep recorder that in turn will be plugged into a laptop containing [PI]. The system will then display and analyze 15 signals (such as brain waves and heart rate) coming in from the astronauts. "[PI] first checks to make sure that all signals are present. It then assesses their quality by performing statistical analyses on them and comparing the results of these analyses with accepted ranges for quality signals," Ms. Essig said.

"If a signal is either not present or of poor quality, a red light associated with that signal will flash on the laptop." The astronaut can then click on the red light to get trouble-shooting procedures. "Once the astronauts are satisfied that the signals are ok, they disconnect from [PI] and close it down," Ms. Essig said.

In early 1986 Professor Young was to have an experiment go up on the shuttle. Then came the Challenger tragedy.

"I knew there would be a long delay before NASA flew again," he said, "so rather than wait, I decided to take advantage of the delay and look into something I'd been interested in for years -- expert systems."

So he took a sabbatical at Stanford at NASA's Ames Research Center and "spent six months studying artificial intelligence in graduate-student mode." His goal: "how can I use this new technology to do space experiments better?"

[PI] grew out of that interest and a strong continuing collaboration with researchers at Ames, currently led by Dennis Heher, and with MIT's Professor Peter Szolovits of the Laboratory for Computer Science and Department of Electrical Engineering and Computer Science. Dr. Alan Natapoff, a research scientist in aeronautics and astronautics, is a co-investigator for [PI] on the current mission with Professor Szolovits.

Professor Young noted that the project has also involved several students, resulting in four MIT theses so far. Most recently Luca Callini received a masters (1998) for his work on the system.

Professor Young is more than familiar with the space program and with the challenges faced by astronauts. In 1993 he was alternatepayload specialist for a mission aboard Space Shuttle Columbia.

Talking about why he became interested in applying artificial intelligence systems to space studies, he explained: "In the quiet of a training session you can explain all the 'what ifs' to an astronaut, but under the special conditions of a space flight all that can go out the window."

Further, "there are millions and millions of people who watch NASA missions, so any comments related to a problem are going to be picked up and potentially become issues for rumor and the press. As a result, there is a great disincentive for an astronaut to say, 'this isn't proceeding like it did in training,' or to otherwise talk about problems. I realized this much more after my own crew experience."

In such a situation it's much easier to communicate with a computer, he said, noting that "[PI] can't foresee everything, but it can do a reasonable job." In the Neurolab mission in April, the system alerted the astronauts to anomalous signals over 100 times. "Eighty percent of the time it was correct and changes were made," said Professor Young.

One of the rewards of working on projects related to the space station is meeting astronauts. For Ms. Essig, who was involved in [PI] training sessions for the crew involved, meeting John Glenn "definitely made my career, as opposed to just my day!" It "was also neat meeting Dr. Mukai. She's a national hero in Japan."

The [PI] work was sponsored by NASA's Ames Research Center and the National Space Biomedical Research Institute, of which Professor Young is director.