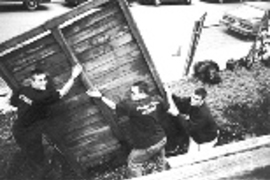 CAMBRIDGE, Mass.--Offering further proof that the industrious beaver is a fitting mascot for the Massachusetts Institute of Technology, 40 students recently worked from near dawn to dusk on a rainy day to construct a new playground for the Cambridge Community Center.

Assembly of the playground marked the first Yanni Krikelis Project, honoring the memory of a 21-year-old mechanical engineering junior from Rafina, Greece, who was killed in a motorcycle accident in Raynham, MA, in August 1995. Mr. Krikelis was a member of DU.

His parents, Drs. Nicholas and Eleftheria Krikelis, and his brother Stephen have remained in close contact with the fraternity since Mr. Krikelis's death and were on hand to participate in the playground construction in April, remaining with the DU workers much of the day to provide refreshments and moral support.

"It's amazing to see how dedicated these young people are to the memory of their brother. They have converted their sorrow into productivity. And through their work, Yanni has been transformed to another life," said Mrs. Krikelis.

"[His death was] not in vain," added Mr. Krikelis. "That's an expression Yanni used to use -- not in vain."

The couple had planned a trip to the United States for Stephen's May graduation from Boston University. When they learned of Delta Upsilon's plans, they decided to come early to be present for the inaugural Yanni Krikelis Project. The Krikelises also attended the Awards Convocation at MIT on May 13 to see the fraternity accept the Weedon award, presented to the independent living group that has promoted the greatest interactions between its members and alumni/ae.

"The comfort that MIT gave us and continues to give us is outstanding," said Mrs. Krikelis. "We feel that MIT is a part of our family, and the brothers from the fraternity are tremendous."

"We're thinking of applying for membership in the DU fraternity -- my wife and myself," Mr. Krikelis said with a smile.

The $5,000 prize money awarded to Delta Upsilon will be used as seed money for the Yanni Krikelis Project Fund.

The fraternity decided earlier this spring to establish the Krikelis Project and chose a playground for the initial project because of the long-term benefit it would offer the community.

DU Community Service chair Stephen Wong, a junior in nuclear engineering, said they chose the CCC from a list published by the MIT Public Service Center. The CCC is a settlement house founded about 70 years ago that runs an after-school program for more than 100 children and a summer camp for about 250.

"They really needed the help since their funds were sort of lacking," Mr. Wong said.

"I knew that our playground needed to be replaced. It was getting to the point of being unsafe," said Dawn Swan, director of the CCC. "But I had absolutely no funds to do it -- even to have the old one hauled away. Then these guys came along."

The new equipment, which cost nearly $6,000, was purchased from ChildLife Playgrounds in Natick, a company that "has never had any problems with any of their equipment. They claim that President Kennedy bought one for the White House in the early sixties," said Jeff LeBlanc, a senior in chemical engineering who did public-relations work for the Krikelis Project.

The playground has two sand boxes and towers with small covered platforms "like little forts," said Mr. LeBlanc. The towers -- one with a slide and the other with a climbing rope attached -- are connected via yellow tube tunnels large enough for children to crawl through.

"We preserved some of the old playground," said Mr. LeBlanc. "We patched it up, made it safe and rearranged some of the parts to make the whole thing multi-dimensional." He credited Mr. Wong and Andres Hernandez, a sophomore in mechanical engineering, with designing the layout.

The fraternity raised the money from their alumni brothers. "A great number of people donated, but in small amounts, so we had to make a lot of calls," said Mr. LeBlanc, who noted that David Latham, president of the DU Alumni Association, MIT President Charles Vest and his wife Rebecca, and the Deloitte and Touche consulting firm made major donations to the project. Bertucci's donated 15 pizzas for lunch on construction day.

"It was a dreary, gloomy day and it rained in the afternoon. By the end of the day they were all wet and muddy. But they kept working," said Ms. Swan. "And when they left, the area was completely fixed and ready to use. They left no debris behind for us to haul away."

"A lot of people thought we couldn't do it in one day. But we did," said Mr. LeBlanc. "We haven't felt this gratified in a long time."