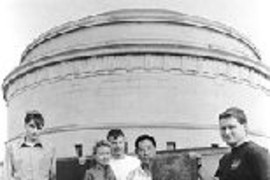 ↓ Download Image
Caption: Prototypes of the 168 chairs that will form a memorial to commemorate the victims of the Oklahoma City bombing were weather-tested on the roof of an MIT building over the summer. Left to right: design firm members Sven Berg (far left), Torrey and Hans Butzer, and MIT Professor Yet-Ming Chiang and graduate student Ben Hellweg, who did the testing.
Credits: Photo / Donna Coveney

Caption:
Prototypes of the 168 chairs that will form a memorial to commemorate the victims of the Oklahoma City bombing were weather-tested on the roof of an MIT building over the summer. Left to right: design firm members Sven Berg (far left), Torrey and Hans Butzer, and MIT Professor Yet-Ming Chiang and graduate student Ben Hellweg, who did the testing.
Credits:
Photo / Donna Coveney

The researchers' conclusion to date: although an initial theoretical analysis of the proposed glass indicated that cracking would not be a problem, practical testing showed otherwise. The glass base of a prototype chair did indeed crack in simulations of an extreme Oklahoma summer atop the roof of MIT's Building 13.

"It's a beautiful object, but this particular composition of glass is not suitable," concluded Yet-Ming Chiang, a professor in the Department of Materials Science and Engineering. However, he said, "they should be able to duplicate the aesthetics with a different glass that's more resistant to fracture." An artist collaborating with the designers, Torrey and Hans Butzer with Sven Berg, is now working with two glass companies to produce such a glass. Samples will be sent to MIT for more testing.

MIT involvement in the memorial began when its designers called the Institute looking for someone who could evaluate the durability of the glass they hoped to use. "We called MIT due to its reputation for materials research," said Torrey Butzer, who noted that the Butzer Design Partnership (with Mr. Berg) relocated to Cambridge from Germany soon after winning the memorial competition.

At the Institute they were directed to Professor Chiang, an expert on ceramics and glass, who quickly agreed to help. Professor Chiang in turn invited Benjamin Hellweg, one of his graduate students, to join the team.

The MIT researchers were primarily concerned about thermal shock, in which brittle materials like glass shrink or expand when subjected to rapid temperature changes. The resulting stresses on the material can cause it to crack.

Thermal shock in glass is most common when there is a quick change from hot to cold. And Professor Chiang and Mr. Hellweg could envision just such a scenario in Oklahoma. During a hot summer day the chairs could be doused with cold water from a thunderstorm.

As a result, the team wanted to determine how resistant the Oklahoma Memorial glass was to thermal shock. To do so they ran a variety of tests on small samples of the glass and on the glass of a prototype chair.

The designers actually delivered two prototype chairs to MIT. Each had the same general design -- a bronze back and seat with a glass base -- but the glass bases for each were different. One featured four separate cast glass slabs connected at the corners; the other a hollow glass block with an open top. The Butzers and Mr. Berg collaborated with artists John Lewis and Chris Vespermann, respectively, in developing these two designs.

In the end they opted for the hollow glass block (both artists, however, will remain involved in the development of the memorial). As a result, the MIT researchers concentrated on the chair incorporating the glass block.

In addition to thermal shock, the researchers were also concerned about thermomechanical incompatibility between the bronze and the glass that could cause fractures. In that case, however, they did not find a problem, "provided that the components are separated by silicone or another durable polymer," Professor Chiang said. And that was already part of the design.

The thermal shock results were another story. In a key test, the MIT researchers found that a change in temperature of 59 degrees Fahrenheit caused the glass in the prototype chair to crack. As a result, they wrote in a report to the designers, "if, as we estimate, the glass can reach a daytime temperature of 120 degrees Fahrenheit in Oklahoma City during the summer months, sudden cooling by a spray of cool water (60 degrees) is likely to cause thermal shock cracking."

They continued: "While it is improbable that quenches of this magnitude would be encountered on a daily basis, [they] could occur in the course of lawn watering, cleaning by maintenance staff, or in the event of sudden thunderstorms."

Further, with time the glass could become even less resistant to thermal shock due to the accumulation of surface scratches and chips that weaken the glass and serve as initiation sites for major cracks. Professor Chiang noted that over a few weeks the initial thermal-shock crack in the prototype chair atop Building 13 grew until it slashed across most of the base.

As a result, they recommended that a more shock-resistant glass be used, specifically one that could withstand a temperature change of at least 120 degrees Fahrenheit. The designers are taking that advice. John Lewis is working with two glass companies -- Corning and Lancaster -- to produce such a glass.

"Currently we're waiting for John to cast a base with the new glass, then he'll send samples back to MIT for more testing," Mrs. Butzer said. Groundbreaking for the memorial is October 25, but the designers have only a rough date for when it will be finished. "We expect it will take 12 to 15 months to construct," Mrs. Butzer said.

Professor Chiang and Mr. Hellweg did the tests and wrote their report at no charge to the designers. The work had other rewards. "It's a project that obviously has so much meaning to people," said Professor Chiang. Mr. Hellweg also noted that "most research projects take a long time to get results. This was a nice study because it was relatively easy to gather the results and it made a difference right away."

The Butzers note that "many in Oklahoma City are eager to receive Professor Chiang's address so that they may write to him, personally thanking him for his time, assistance and expertise."