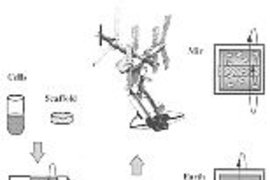 ↓ Download Image
Caption: In the first tissue engineering experiment in space, cartilage cells were seeded onto polymer scaffolds and the resulting constructs were cultivated in rotating bioreactors on Earth and in space.
Credits: Image courtesy / Proceedings of the National Academy of Sciences

Caption:
In the first tissue engineering experiment in space, cartilage cells were seeded onto polymer scaffolds and the resulting constructs were cultivated in rotating bioreactors on Earth and in space.
Credits:
Image courtesy / Proceedings of the National Academy of Sciences

CAMBRIDGE, Mass.--Thanks in part to a diligent astronaut and several million bovine cartilage cells, MIT and NASA scientists report that the first tissue-engineering experiment in space was a resounding success. The work could lead to experiments with human tissues to determine why space is so hard on the body.

In the experiment, which ran for three months on Earth and then for an additional four months aboard the Space Station Mir or on Earth, the scientists grew viable cartilage tissue from bovine cartilage cells "seeded" on polymer scaffolds. Key to the work was a bioreactor that supplied the cells with nutrients and gases and removed wastes so they could regenerate a full tissue. Among the scientists' findings: the tissues grown on Mir were smaller and mechanically weaker than those grown on Earth.

"The study was very complex, so it was a technical feat just to keep the cells alive," said Lisa E. Freed, a research scientist at the Harvard-MIT Division of Health Sciences and Technology. Dr. Freed is first author of a paper to be published in the December 9 Proceedings of the National Academy of Sciences.

"It demonstrates the feasibility of cultivating cells--and tissues--in space over relatively long periods of time," continued Dr. Freed, who will also present the work at a December 13, 1997 meeting of the American Society for Cell Biology. Previous space studies involving cells lasted only about 10 days and did not involve the growth of full tissues.

The work paves the way for controlled experiments with human tissues. Growing human bone and muscle in space, for example, could help scientists understand why these tissues are adversely affected by microgravity (for example, human bones can become brittle). "After more than 25 years in space we still can't explain this," Dr. Freed said.

That knowledge, in turn, could lead to the development of effective counter measures to prevent such effects. This would be important for the health of astronauts aboard space stations and for long-term voyages in space, such as missions to Mars.

The work will not, however, lead to the growth of replacement body parts in space. "That's always the first question we're asked," said Gordana Vunjak-Novakovic, a research scientist at MIT's Whitaker College of Health Sciences and Technology. Contrary to popular beliefs, tissues do not appear to grow better in space than on Earth.

The new study corroborates this. For example, the tissues from space were smaller and mechanically inferior to those grown on Earth. "They had less of one matrix component that's thought to contribute most to cartilage stiffness," Dr. Vunjak-Novakovic said.

The scientists also observed that the two sets of cartilage had different overall shapes. The original polymer scaffolds used to support the cells as they grew and differentiated into tissue were disc-shaped. The cartilage constructs grown on Earth tended to retain this shape, while those grown in space became more spherical. (The scaffolds biodegrade over time, leaving the regenerated tissue.)

Key to the success of the experiment, which was aboard Mir from September 16, 1996, through January 22, 1997, was astronaut John Blaha. Mr. Blaha ran certain procedures and otherwise cared for the growing tissues. For example, he took weekly samples of the fluid surrounding the cell-polymer constructs and measured parameters like pH and oxygen content. "Cell growth changes these parameters, so measuring them was a way of monitoring the experiment," Dr. Freed said.

The communications lag between space and Earth complicated the work. "If John had a question about some aspect of the experiment, he'd radio it down to Earth and there were limited windows when he could do that," Dr. Freed explained. Sometimes it took three days between query and answer. "Such a delay could have killed the cells [if something had been really wrong]," Dr. Freed said.

That particular situation never happened, but the experiment was still beset by technical hitches. "It was one thing after another. There was never a calm period over that four months," Dr. Freed said. For example, gas bubbles in the bioreactor vessel threatened the experiment.

Thanks in part to the success of the experiment, the scientists were awarded a contract with Cambridge-based Payload Systems, Inc., to develop a more advanced cell-culture unit for the International Space Station.

The new system, which will be fully automated, will run up to 24 experiments concurrently and will be able to handle mammalian cells and tissues, plant cells, and microorganisms. The system is also designed to determine how specific characteristics of the space environment affect cells and tissues. Although the MIT/NASA team documented a variety of differences between the cartilage grown on Earth and in space, "we can't explain exactly what factors caused these effects," Dr. Freed said. "We need more experiments to help evaluate the individual contributions of different factors to determine the underlying mechanism behind the observed effects."

For example, one feature of the new system will allow scientists to subject experiments to gravity while they are in space. "That will allow us to decouple the effects of gravity on the growing tissues from everything else," Dr. Vunjak-Novakovic said.

Additional authors of the PNAS paper are Robert S. Langer, Germeshausen Professor of Chemical and Biomedical Engineering; Ivan Martin, a postdoctoral associate at the Harvard-MIT Division of Health Sciences and Technology; and Neal R. Pellis, Biotechnology Program Director at the NASA-Johnson Space Center.

Major funding for the work was from the NASA Microgravity Research Division, with additional support from Advanced Tissue Sciences.