MIT hurdler was victor/chronicler of 1896 Olympics 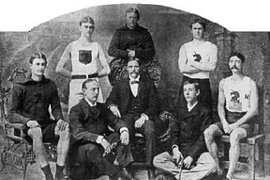 CAMBRIDGE, Mass.-- "...At two sharp (we) appeared in running clothes in the Stadium itself, just as the Games were about to commence. The sight that met our eyes was one never to be forgotten. Row after row of people all dressed in holiday attire lined the seats of the Stadium, while at the end sat the King and Royal Family of Greece, the King of Serbia, two Grand Dukes of Russia, and hundreds of officers of different nationalities, all in the gayest of uniforms... Eighty-two thousand people were seated and thirty thousand more, for whom there was no room, were standing tier on tier on a hill that towered above one side of the seats," chronicled Thomas Pelham Curtis, MIT Class of 1894, victor of the 110-meter hurdles competition in the first modern Olympics one hundred years ago.

Curtis traveled to Greece with a last-minute American team from the Boston area and came away with first place in a race he reported as "nip and tuck from start to finish." The games were a revival of the ancient games last run in 393 A.D. and ended by the emperor Theodosius. Curtis recorded the 1896 games in a 1924 issue of Technology Review.

Curtis was born in California to a noted Boston family. He came to MIT from St. Paul, MN to study electrical engineering. He was very active in his MIT class--playing on the varsity football team and serving as the team's vice president, holding the position of chief marshal of the Class Day committee and competing with the track team. Curtis did not officially graduate with the class, though. In the 1893-94 yearbook, "The Technology Portfolio," he was listed as one of 28 students who were "intimately connected with the class of 1894 who did not try for degrees."

"Only six men had been left from the trial heats," according to Curtis, "including a Frenchman, an Englishman, a Greek and two Germans. The race was nip and tuck from start to finish, both the Englishman and myself clearing the tenth hurdle abreast. I beat him out in the stretch by a scant two feet." Curtis ran the hurdles that day in 17.6 seconds.

Curtis commented that the Olympic records from those first modern games were not particularly good because of the Stadium's soft track which had not been completed. "But there was a romance and a novelty connected with them that is hard to describe," he wrote.

The American athletes also were not completely prepared beforehand. Curtis' party--members of the Boston Athletic Club--decided to compete in the Olympics at the last minute, joining a team from Princeton, and set sail for Greece less than two weeks before the opening event.

To prepare the athletes for the competition, the steamship Fulda's rear deck was cleared from 3-4 pm each day and used for practicing the various events. The team took advantage of the ship's stop in Gibraltar for practice as well. "While the other passengers hired carriages, guides, etc., and spent their time in sight-seeing, we took our spiked shoes and other paraphernalia, and visited the racing park belonging to the English officers stationed there," according to Curtis.

The Boston team arrived in Athens the day before the games began, Sunday, April 5th. They were greeted enthusiastically and were marched through town to a City Hall banquet where "great surprise was shown at our hesitation in drinking great bumpers of white wine which were forced upon us."

On the first day of events, Curtis and his teammate T.E. Burke were entered in the pro-gram's first race, the 100-meter race, which had 24 competitors from all over Europe. Curtis and Burke each won their heats by narrow margins. Curtis also ran the preliminaries of the 400-meter race and 110-meter hurdles.

"As this was the race I had come especially to run, and as I had heard great tales of the prowess of my opponent and his many victories in England, I breathed much more freely and was able to look at the other final contests with much greater pleasure."

It is through Curtis's eyes that we now see the 1896 games. Curtis's camera, a gift from his parents, is the source of most of the photos of the that early Olympics, according to the Los Angeles Times.

When all the races were tallied the Americans did exceedingly well, taking first place in nine of the 12 competitions. The prizes were awarded from a platform in front of the King of Greece's box. Here, Curtis received an olive branch from the sacred grove of Olympus, a specially designed medal made from silver*, and a "diploma" engraved in Greek with a description of his award.

Following his education at MIT, Curtis studied abroad for a year at the Polytechnicum in Dresden. Returning to Boston, he and a friend from MIT, F.W. Lord, who was the Captain of MIT's athletic team, went into business together as electrical contractors in the Lord Electric Company. Curtis was active in a number of community and sports organizations including the Tennis and Racquet Club, Boston Athletic Club, the Country Club, Oakley Country Club, Nahant Club and D.K.E. He served as captain in the Massachusetts National Guard and was a military aide to Massachusetts Governor Calvin Coolidge in World War I. Curtis married Frances K. Small in 1893 and had four children. He died in 1944.

*Gold medals were not awarded to first place winners until later Olympics.

A number of MIT alumni have competed. MIT's most recent Olympic athlete, Alexis Photoiades, '91, was a skier for the Isle of Cyprus in the 1988 and 1992 Olympics. Other MIT Olympians of note include hurdler Henry Steinbrenner '27, who competed in the 1928 Olympics. Henry is father of George Steinbrenner, principal owner of the NY Yankees. MIT's track, Steinbrenner Stadium, is named after this famous alumnus.

The 1996 Olympic 110-meter hurdle competition will be held: