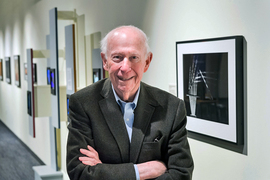 Kurtz earned three degrees at MIT — a bachelor's degree in industrial management and bachelor's and master's degrees in metallurgy — all of which contributed to his keen interest in art and his extensive involvement with the Institute.

"I will remember him for his profound commitment to forging strong ties between art, science, and technology," says Philip Khoury, associate provost and the Ford International Professor of History at MIT. "He understood that it's at their intersection that MIT has made its most profound contributions to the arts worldwide. He began to discover this reality during his undergraduate years as he pursued the study of material sciences and engineering, always with an eye on art and design."

Kurtz offered support to the Center for Art, Science and Technology by commissioning a course in honor of his mentor, Professor Merton C. Flemings, that explored the connections between art, design, and materials science. He served on the Council for the Arts at MIT; was a passionate supporter of the MIT Museum; and provided funding for exhibitions through the Kurtz Gallery for Photography. His support for MIT also included graduate fellowships and service on visiting committees and advisory bodies representing a broad range of departments not directly related to the arts. Kurtz joined the Corporation in 1994. He won the MIT Alumni Association's Bronze Beaver award for distinguished service in 2002.

“Ron was an extraordinary force in the world,” President L. Rafael Reif wrote to the Kurtz family. “His curiosity and humility led him to unexpected places and ideas, including appreciating the powerful synchronicity between science and art.”

"Ron Kurtz was a steadfast friend to MIT since he arrived on campus in 1950," says Diane Greene, chair of the MIT Corporation. "His service to MIT was vast, and through his volunteer work and support he inspired and elevated countless programs and departments throughout our campus. His work on MIT’s visiting committees, his establishment of graduate fellowships and undergraduate scholarships, his advocacy for the arts at MIT and the MIT Museum, and his role as a life member emeritus of the MIT Corporation represent only a fraction of his impact. Ron affected the lives of so many members of the Institute community; he brought humaneness, enthusiasm, and excellence to all that he did. The Institute is better for the seven decades of his creativity, curiosity, and guidance."

At the time of Kurtz's transfer to life member emeritus of the MIT Corporation in 2007, former MIT president Paul Gray (who passed away in 2017) referred to Kurtz as a "modest, kindly, and thoughtful man, he is the epitome of a dedicated and grateful alumnus."

Kurtz attended high school in Teaneck, New Jersey, and then was admitted to MIT to earn his first bachelor's degree. After serving in the U.S. Air Force, he returned to MIT to earn his second bachelor's degree and his master's. He began his industrial career as a materials engineer with Nuclear Metals, Inc. and then joined Kulite Tungsten Corporation, where he spent the next 35 years building the company into a global leader in the manufacture of tungsten alloys used in the aerospace, medical, electronics, and sporting goods industries. He retired from Kulite in 1997 as president and CEO.

To cultivate his passion for photography, Kurtz began acquiring a vast knowledge, as well as works by Ansel Adams, Abbott, and Arnold Newman. He bought the archive of Abbott — especially known for her "Nightview, New York," as well as for the most widely known portraits of James Joyce — in the 1980s, and founded a publishing company called Commerce Graphics, ultimately becoming a dealer and distributor of fine art photographs and prints.

For years, he and his wife, Carol Kurtz, welcomed and hosted many newcomers to the MIT community. They also supported outreach by the Minority Introduction to Engineering and Science (MITES) program, which offers summer enrichment in science, technology, engineering, and mathematics to students from underrepresented or underserved communities.

Kurtz’ desire to give back and to help others was a defining trait. "Above all, I will remember Ron for his compassion for those most in need of our understanding and support," Khoury says. "I feel privileged to have known Ron Kurtz and to have been his friend."

Kurtz is survived by his wife and his children, David (and Shelly) Kurtz, Jillian (and Jeremy) Temkin, and Daniel (and Wendy McKee) Kurtz, and his grandchildren, Alisa (and Trevor) Gilbert, Nicole Kurtz, Jake (Madelyn) Temkin, Andrew Kurtz, and Max Temkin.

Donations in Kurtz’ memory may be made to the MIT Scholarship Fund, Doctors Without Borders, or the Center for Food Action.