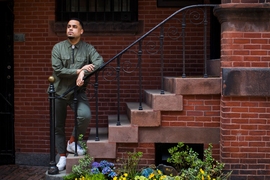 The following podcast and transcript features Darien Alexander Williams, a PhD student in the Department of Urban Studies and Planning at MIT.

I think, similar to previous moments, all of the ingredients for a transformational change are here. They've always been here, but it's increasingly clear to people at this moment, and so whether this moment is different than sort of really high-tension racial violence, trauma, political kinds of moments in the past, I think remains to be seen.

Darien Alexander Williams is a PhD student in the Department of Urban Studies and Planning at MIT. His academic research, which focuses on disaster recovery, community organizing, and marginalized populations has taken him to study in locations and with communities across the country and the world. As recently documented acts of police brutality ignited Black Lives Matter protests globally, Darien found himself reflecting on the early days of his academic career, when he was exposed to a history of resilience within black communities and the tradition of black people building things and creating a space for themselves not talked about much. He quickly realized a lot of scholarship and national attention was focused more on the destruction and trauma in communities of color, rather than the ways those communities have harnessed their power to adapt and organize. To Darien, it seemed vital to learn about the actual past, to understand the present, and build a better future.

My first sort of gig as I started my master's program was being a part of a team that planned for the long-term disaster recovery of a town called Princeville, North Carolina, and Princeville is the first chartered black town in the United States. I didn't necessarily know what kind of situation I was going into. I was a new planning student. This entire world was new to me. But it became very clear very early on in that work that drawing a direct reference from the past work of black communities was really important to understand how the future would unfold.

And I think my experience in Princeville introduced me to this entire world that I wasn't aware of, that there's plenty of towns across the United States that were planned, built, governed by, are still governed by black people who built something outside of sort of conventional institutions or conventional government structures, and they did that out of necessity because they were excluded from them. And that sort of led me to work like the stuff that Andrea Roberts produced, which is like on Texas Freedom Colonies, where entire towns of emancipated black folks sprung up across Texas, or Karla Slocum's work with the black towns of Oklahoma, or learning about villages in the Great Dismal Swamp, which just sounds like a fantastical fantasy novel, but it was a thing. Escaped enslaved people ran into the swamp, found each other, started villages and towns. And so that sort of brought me into the space of like, okay, I'm a black person. I'm a black man. I am interested in what the future looks like for me and for my family and for my communities.

And I think there was no way for me to sort of get at that without understanding the past. And so when I think about sort of social unrest and police brutality and Black Lives Matter, how the instruments of urban planning have pushed people into a space or into relationships where wealth is being extracted from them, labor is being extracted from them, people are suffering quite a bit, and how that produces these moments where people resist and where people build something and fight back, and also in that process, imagine what the future is and what kind of future they're building.

Darien describes the past few weeks as strange and intense, going from quarantine life to crowds of thousands at protests back to his academic work and then out again to another protest has been physically and emotionally draining. Darien says his disaster work has given him the tools to engage people in meaningful and important conversations he's been wanting to have for a while. He stresses the importance of engaging with all different kinds of people, and opening up avenues of communication and education can make a big difference, especially during times of extreme social unrest.

It's really easy to feel overwhelmed and alone, and there are barriers to this sometimes, just like internally, but the easiest way to sort of move forward and to address all of those things is education and action and engagement is to join a group. Join a group of people working on building the world that you want to build and a group that will push you beyond your current understanding of the world. These also push people into spaces that are a little bit uncomfortable. You have to be a little bit uncomfortable. You might have to break some policies. You might have to break some laws if you acknowledge that these policies or laws were built unjustly or built on the oppression of a certain group.

You should not be comfortable in this moment, in my opinion, and there's plenty of people who are asking folks to join their group, and there's plenty of folks who have written recommendations and statements and strategies and game plans for people to follow. The BGSA and the BSU are really inspiring groups for me since their founding in 1968, and they've been pushing so many ideas and imagining so many different, better worlds than the one that we're currently in, and I think it's possible to make those worlds happen. So I think that's what's kind of important to do right now, have people that you're accountable to, and listen to them and actually do right by them, and in turn, do right by yourself.