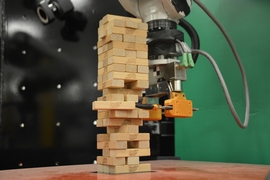 ↓ Download Image
Caption: The Jenga-playing robot demonstrates something that’s been tricky to attain in previous systems: the ability to quickly learn the best way to carry out a task, not just from visual cues, as it is commonly studied today, but also from tactile, physical interactions.
Credits: Courtesy of the researchers

Caption:
The Jenga-playing robot demonstrates something that’s been tricky to attain in previous systems: the ability to quickly learn the best way to carry out a task, not just from visual cues, as it is commonly studied today, but also from tactile, physical interactions.
Credits:
Courtesy of the researchers

In the basement of MIT’s Building 3, a robot is carefully contemplating its next move. It gently pokes at a tower of blocks, looking for the best block to extract without toppling the tower, in a solitary, slow-moving, yet surprisingly agile game of Jenga.

The robot, developed by MIT engineers, is equipped with a soft-pronged gripper, a force-sensing wrist cuff, and an external camera, all of which it uses to see and feel the tower and its individual blocks.

As the robot carefully pushes against a block, a computer takes in visual and tactile feedback from its camera and cuff, and compares these measurements to moves that the robot previously made. It also considers the outcomes of those moves — specifically, whether a block, in a certain configuration and pushed with a certain amount of force, was successfully extracted or not. In real-time, the robot then “learns” whether to keep pushing or move to a new block, in order to keep the tower from falling.

Details of the Jenga-playing robot are published today in the journal Science Robotics. Alberto Rodriguez, the Walter Henry Gale Career Development Assistant Professor in the Department of Mechanical Engineering at MIT, says the robot demonstrates something that’s been tricky to attain in previous systems: the ability to quickly learn the best way to carry out a task, not just from visual cues, as it is commonly studied today, but also from tactile, physical interactions.

“Unlike in more purely cognitive tasks or games such as chess or Go, playing the game of Jenga also requires mastery of physical skills such as probing, pushing, pulling, placing, and aligning pieces. It requires interactive perception and manipulation, where you have to go and touch the tower to learn how and when to move blocks,” Rodriguez says. “This is very difficult to simulate, so the robot has to learn in the real world, by interacting with the real Jenga tower. The key challenge is to learn from a relatively small number of experiments by exploiting common sense about objects and physics.”

He says the tactile learning system the researchers have developed can be used in applications beyond Jenga, especially in tasks that need careful physical interaction, including separating recyclable objects from landfill trash and assembling consumer products.

“In a cellphone assembly line, in almost every single step, the feeling of a snap-fit, or a threaded screw, is coming from force and touch rather than vision,” Rodriguez says. “Learning models for those actions is prime real-estate for this kind of technology.” 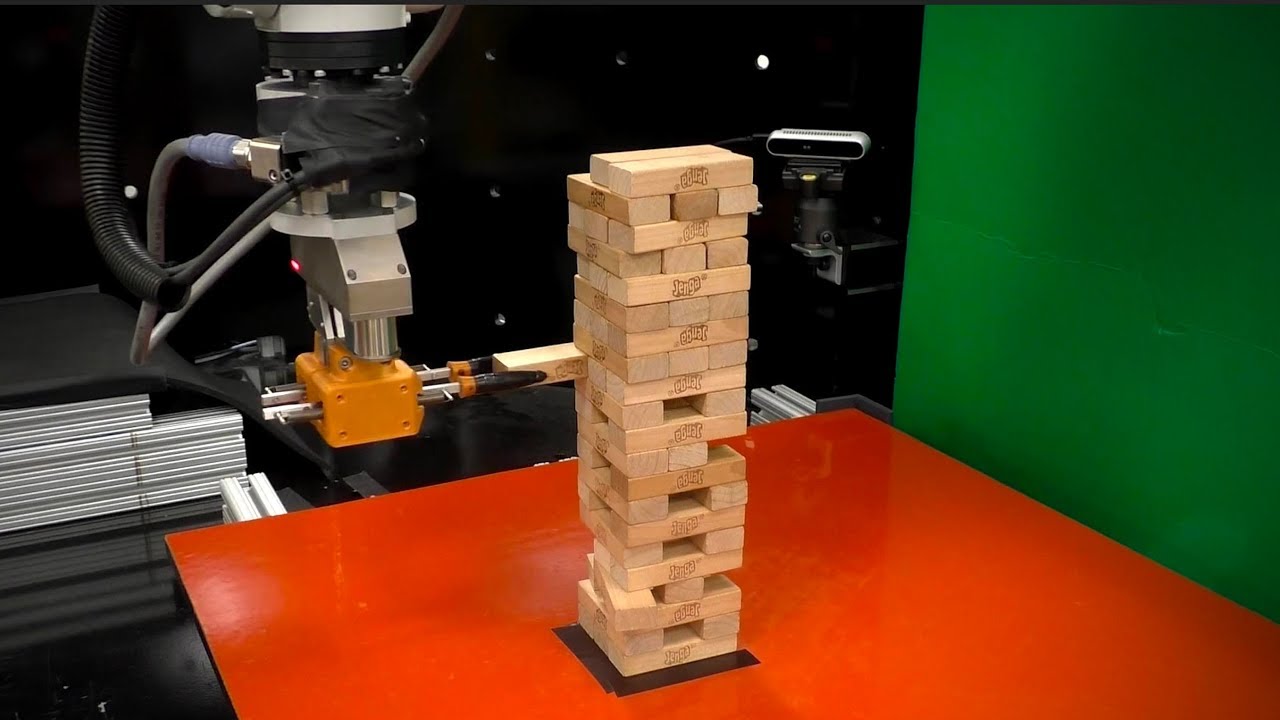 In the game of Jenga — Swahili for “build” — 54 rectangular blocks are stacked in 18 layers of three blocks each, with the blocks in each layer oriented perpendicular to the blocks below. The aim of the game is to carefully extract a block and place it at the top of the tower, thus building a new level, without toppling the entire structure.

To program a robot to play Jenga, traditional machine-learning schemes might require capturing everything that could possibly happen between a block, the robot, and the tower — an expensive computational task requiring data from thousands if not tens of thousands of block-extraction attempts.

Instead, Rodriguez and his colleagues looked for a more data-efficient way for a robot to learn to play Jenga, inspired by human cognition and the way we ourselves might approach the game.

The team customized an industry-standard ABB IRB 120 robotic arm, then set up a Jenga tower within the robot’s reach, and began a training period in which the robot first chose a random block and a location on the block against which to push. It then exerted a small amount of force in an attempt to push the block out of the tower.

For each block attempt, a computer recorded the associated visual and force measurements, and labeled whether each attempt was a success.

Rather than carry out tens of thousands of such attempts (which would involve reconstructing the tower almost as many times), the robot trained on just about 300, with attempts of similar measurements and outcomes grouped in clusters representing certain block behaviors. For instance, one cluster of data might represent attempts on a block that was hard to move, versus one that was easier to move, or that toppled the tower when moved. For each data cluster, the robot developed a simple model to predict a block’s behavior given its current visual and tactile measurements.

Fazeli says this clustering technique dramatically increases the efficiency with which the robot can learn to play the game, and is inspired by the natural way in which humans cluster similar behavior: “The robot builds clusters and then learns models for each of these clusters, instead of learning a model that captures absolutely everything that could happen.”

The researchers tested their approach against other state-of-the-art machine learning algorithms, in a computer simulation of the game using the simulator MuJoCo. The lessons learned in the simulator informed the researchers of the way the robot would learn in the real world.

“We provide to these algorithms the same information our system gets, to see how they learn to play Jenga at a similar level,” Oller says. “Compared with our approach, these algorithms need to explore orders of magnitude more towers to learn the game.”

Curious as to how their machine-learning approach stacks up against actual human players, the team carried out a few informal trials with several volunteers.

“We saw how many blocks a human was able to extract before the tower fell, and the difference was not that much,” Oller says.

But there is still a way to go if the researchers want to competitively pit their robot against a human player. In addition to physical interactions, Jenga requires strategy, such as extracting just the right block that will make it difficult for an opponent to pull out the next block without toppling the tower.

For now, the team is less interested in developing a robotic Jenga champion, and more focused on applying the robot’s new skills to other application domains.

“There are many tasks that we do with our hands where the feeling of doing it ‘the right way’ comes in the language of forces and tactile cues,” Rodriguez says. “For tasks like these, a similar approach to ours could figure it out.”

This research was supported, in part, by the National Science Foundation through the National Robotics Initiative.

CBS This Morning spotlights how MIT researchers have developed a new robot that can successfully play Jenga. “It is an automated system that has had a learning period first,” explains Prof. Alberto Rodriguez. “It uses the information from the camera and the force sensor to interpret its interactions with the Jenga tower.”

In this video, graduate student Nima Fazeli speaks with the BBC News about his work developing a robot that uses sensors and cameras to learn how to play Jenga. “It’s using these techniques from AI and machine learning to be able to predict the future of its actions and decide what is the next best move,” explains Fazeli.

MIT researchers have developed a robot that can play Jenga by combining interactive perception and manipulations, reports Mattha Busby for The Guardian. “In what marks significant progress for robotic manipulation of real-world objects, a Jenga-playing machine can learn the complex physics involved in withdrawing wooden blocks from a tower through physical trial and error,” Busby explains.

MIT researchers have developed a robot that can play Jenga. “It "learns" whether to remove a specific block in real time, using visual and tactile feedback, in much the same way as a human player would switch blocks if the tower started to wobble,” reports Jack Guy for CNN.

Wired reporter Matt Simon writes that MIT researchers have engineered a robot that can teach itself to play the game of Jenga. As Simon explains, the development is a “big step in the daunting quest to get robots to manipulate objects in the real world.”

Gizmodo reporter Andrew Liszewski writes that MIT researchers have developed a robot that can play Jenga using visual and physical cues. The ability to feel “facilitated the robot’s ability to learn how to play all on its own, both in terms of finding a block that was loose enough to remove, and repositioning it on the top of the tower without upsetting the delicate balance.”

MIT researchers have developed a robot that can learn how to successfully play Jenga, reports Brian Heater for TechCrunch. “The robot has to learn in the real world, by interacting with the real Jenga tower,” explains Prof. Alberto Rodriguez. “The key challenge is to learn from a relatively small number of experiments by exploiting common sense about objects and physics.”