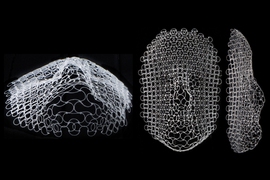 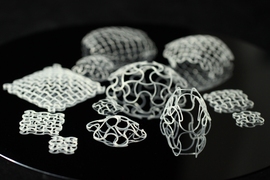 ↓ Download Image
Caption: A set of lattice structures that has transformed into spherical caps, or dome-like shapes, after application of a temperature difference. The individual samples range from 3x3 cells to 20x20 cells, with further variations cell sizes and rib dimensions.
Credits: Image: J. William Boley

Caption:
For the domes: A set of lattice structures that has transformed into spherical caps, or dome-like shapes, after application of a temperature difference. The individual samples range from 3x3 cells to 20x20 cells, with further variations cell sizes and rib dimensions.
Credits:
Image: J. William Boley

Researchers at MIT and elsewhere have designed 3-D printed mesh-like structures that morph from flat layers into predetermined shapes, in response to changes in ambient temperature. The new structures can transform into configurations that are more complex than what other shape-shifting materials and structures can achieve.

As a demonstration, the researchers printed a flat mesh that, when exposed to a certain temperature difference, deforms into the shape of a human face. They also designed a mesh embedded with conductive liquid metal, that curves into a dome to form an active antenna, the resonance frequency of which changes as it deforms.

The team’s new design method can be used to determine the specific pattern of flat mesh structures to print, given the material’s properties, in order to make the structure transform into a desired shape.

The researchers say that down the road, their technique may be used to design deployable structures, such as tents or coverings that automatically unfurl and inflate in response to changes in temperature or other ambient conditions.

Such complex, shape-shifting structures could also be of use as stents or scaffolds for artificial tissue, or as deformable lenses in telescopes. Wim van Rees, assistant professor of mechanical engineering at MIT, also sees applications in soft robotics.

“I’d like to see this incorporated in, for example, a robotic jellyfish that changes shape to swim as we put it in water,” says van Rees. “If you could use this as an actuator, like an artificial muscle, the actuator could be any arbitrary shape that transforms into another arbitrary shape. Then you’re entering an entirely new design space in soft robotics.”

Van Rees and his colleagues are publishing their results this week in the Proceedings of the National Academy of Sciences. His co-authors are J. William Boley of Boston University; Ryan Truby, Arda Kotikian, Jennifer Lewis, and L. Mahadevan of Harvard University; Charles Lissandrello of Draper Laboratory; and Mark Horenstein of Boston University.

Two years ago, van Rees came up with a theoretical design for how to transform a thin flat sheet into a complex shape such as a human face. Until then, researchers in the field of 4-D materials — materials designed to deform over time — had developed ways for certain materials to change, or morph, but only into relatively simple structures.

“My goal was to start with a complex 3-D shape that we want to achieve, like a human face, and then ask, ‘How do we program a material so it gets there?’” van Rees says. “That’s a problem of inverse design.”

He came up with a formula to compute the expansion and contraction that regions of a bilayer material sheet would have to achieve in order to reach a desired shape, and developed a code to simulate this in a theoretical material. He then put the formula to work, and visualized how the method could transform a flat, continuous disc into a complex human face.

But he and his collaborators quickly found that the method wouldn’t apply to most physical materials, at least if they were trying to work with continuous sheets. While van Rees used a continuous sheet for his simulations, it was of an idealized material, with no physical constraints on the amount of expansion and contraction it could achieve. Most materials, in contrast, have very limited growth capabilities. This limitation has profound consequences on a property known as double curvature, meaning a surface that can curve simultaneously in two perpendicular directions — an effect that is described in an almost 200-year-old theorem by Carl Friedrich Gauss called the Theorema Egregium, Latin for “Remarkable Theorem.”

If you’ve ever tried to gift wrap a soccer ball, you’ve experienced this concept in practice: To transform paper, which has no curvature at all, to the shape of a ball, which has positive double curvature, you have to crease and crumple the paper at the sides and bottom to completely wrap the ball. In other words, for the paper sheet to adapt to a shape with double curvature, it would have to stretch or contract, or both, in the necessary places to wrap a ball uniformly.

To impart double curvature to a shape-shifting sheet, the researchers switched the basis of the structure from a continuous sheet to a lattice, or mesh. The idea was twofold: first, a temperature-induced bending of the lattice’s ribs would result in much larger expansions and contractions of the mesh nodes, than could be achieved in a continuous sheet. Second, the voids in the lattice can easily accommodate large changes in surface area when the ribs are designed to grow at different rates across the sheet.

The researchers also designed each individual rib of the lattice to bend by a predetermined degree in order to create the shape of, say, a nose rather than an eye-socket.

For each rib, they incorporated four skinnier ribs, arranging two to line up atop the other two. All four miniribs were made from carefully selected variations of the same base material, to calibrate the required different responses to temperature.

When the four miniribs were bonded together in the printing process to form one larger rib, the rib as a whole could curve due to the difference in temperature response between the materials of the smaller ribs: If one material is more responsive to temperature, it may prefer to elongate. But because it is bonded to a less responsive rib, which resists the elongation, the whole rib will curve instead.

The researchers can play with the arrangement of the four ribs to “preprogram” whether the rib as a whole curves up to form part of a nose, or dips down as part of an eye socket.

To fabricate a lattice that changes into the shape of a human face, the researchers started with a 3-D image of a face — to be specific, the face of Gauss, whose principles of geometry underly much of the team’s approach. From this image, they created a map of the distances a flat surface would require to rise up or dip down to conform to the shape of the face. Van Rees then devised an algorithm to translate these distances into a lattice with a specific pattern of ribs, and ratios of miniribs within each rib.

The team printed the lattice from PDMS, a common rubbery material which naturally expands when exposed to an increase in temperature. They adjusted the material’s temperature responsiveness by infusing one solution of it with glass fibers, making it physically stiffer and more resistant to a change in temperature. After printing lattice patterns of the material, they cured the lattice in a 250-degree-Celsius oven, then took it out and placed it in a saltwater bath, where it cooled to room temperature and morphed into the shape of a human face.

Courtesy of the researchers

The team also printed a latticed disc made from ribs embedded with a liquid metal ink — an antenna of sorts, that changed its resonant frequency as the lattice transformed into a dome.

Van Rees and his colleagues are currently investigating ways to apply the design of complex shape-shifting to stiffer materials, for sturdier applications, such as temperature-responsive tents and self-propelling fins and wings.

This research was supported, in part, by the National Science Foundation, and Draper Laboratory.

MIT researchers have developed a 3D-printed mesh structure that can transform from a flat surface into complex shapes in response to temperature changes, reports the Xinhua news agency. “The technique can be used to design deployable structures like tents or coverings that automatically unfurl and inflate, and also be used as scaffolds for artificial tissue or deformable lenses in telescopes.”

A new era in 3-D printing

Worm-inspired material strengthens, changes shape in response to its environment