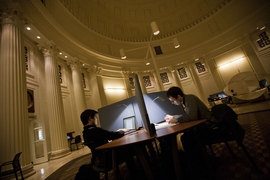 MIT’s provost, in consultation with the vice president for research, the chair of the faculty, and the director of the libraries, has appointed an ad hoc task force on open access to MIT’s research. Convening the task force was one of the 10 recommendations presented in the preliminary report of the Future of Libraries Task Force.

The open access task force, chaired by Class of 1922 Professor of Electrical Engineering and Computer Science Hal Abelson and Director of Libraries Chris Bourg, will lead an Institute-wide discussion of ways in which current MIT open access policies and practices might be updated or revised to further the Institute’s mission of disseminating the fruits of its research and scholarship as widely as possible.

“To solve the world’s toughest challenges, we must lower the barriers to knowledge,” says Maria Zuber, vice president for research. “We want to share MIT’s research as widely and openly as we can, not only because it’s in line with our values but because it will accelerate the science and the scholarship that can lead us to a better world. I look forward to seeing the Institute strengthen its leadership position in open access through this task force’s work.”

Adopted in 2009, the MIT Faculty Open Access Policy allows MIT authors to legally hold onto rights in their scholarly articles, including the right to share them widely. It was one of the first and most far-reaching initiatives of its kind in the United States. MIT remains a leader in open access, with 44 percent of faculty journal articles published since the adoption of the policy freely available to the world. In April of this year, the Institute announced a new policy under which all MIT authors — including students, postdocs, and staff — can opt in to an open access license.

The preliminary report of the Institute-wide Future of Libraries Task Force, released in October 2016, acknowledged that while MIT’s open access policy and implementation are widely seen as a successful model, “the fact remains that most of MIT’s scholarship remains unavailable for open dissemination. … The gap in coverage not only represents a loss in access for MIT’s global community of stakeholders, it also ensures that MIT’s full contribution to the scholarly record cannot be comprehensively assessed or computationally analyzed.”

The task force’s activities will include reviewing MIT’s open access activities to date, as well as those of sister institutions and other organizations, and working with faculty and administration in MIT’s departments, labs, centers, and other units such as MITx, MIT Press, and the Office for Digital Learning, to discuss these initiatives and opportunities for enhancing them.

The members of the task force are:

The task force will prepare recommendations to the administration, and as appropriate, to the faculty, for new and strengthened open access initiatives, together with possible changes to MIT policies, and will work with the administration to develop implementation plans.