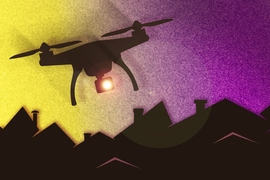 ↓ Download Image
Caption: Engineers at MIT have come up with an algorithm to tune a Dynamic Vision Sensor (DVS) camera, simplifying a scene to its most essential visual elements and potentially enabling the development of faster drones.

Caption:
Engineers at MIT have come up with an algorithm to tune a Dynamic Vision Sensor (DVS) camera, simplifying a scene to its most essential visual elements and potentially enabling the development of faster drones.

There’s a limit to how fast autonomous vehicles can fly while safely avoiding obstacles. That’s because the cameras used on today’s drones can only process images so fast, frame by individual frame. Beyond roughly 30 miles per hour, a drone is likely to crash simply because its cameras can’t keep up.

Recently, researchers in Zurich invented a new type of camera, known as the Dynamic Vision Sensor (DVS), that continuously visualizes a scene in terms of changes in brightness, at extremely short, microsecond intervals. But this deluge of data can overwhelm a system, making it difficult for a drone to distinguish an oncoming obstacle through the noise.

Now engineers at MIT have come up with an algorithm to tune a DVS camera to detect only specific changes in brightness that matter for a particular system, vastly simplifying a scene to its most essential visual elements.

The results, which they presented this week at the IEEE American Control Conference in Seattle, can be applied to any linear system that directs a robot to move from point A to point B as a response to high-speed visual data. Eventually, the results could also help to increase the speeds for more complex systems such as drones and other autonomous robots.

“There is a new family of vision sensors that has the capacity to bring high-speed autonomous flight to reality, but researchers have not developed algorithms that are suitable to process the output data,” says lead author Prince Singh, a graduate student in MIT’s Department of Aeronautics and Astronautics. “We present a first approach for making sense of the DVS’ ambiguous data, by reformulating the inherently noisy system into an amenable form.”

Taking a visual cue from biology

The DVS camera is the first commercially available “neuromorphic” sensor — a class of sensors that is modeled after the vision systems in animals and humans. In the very early stages of processing a scene, photosensitive cells in the human retina, for example, are activated in response to changes in luminosity, in real time.

Neuromorphic sensors are designed with multiple circuits arranged in parallel, similarly to photosensitive cells, that activate and produce blue or red pixels on a computer screen in response to either a drop or spike in brightness.

Instead of a typical video feed, a drone with a DVS camera would “see” a grainy depiction of pixels that switch between two colors, depending on whether that point in space has brightened or darkened at any given moment. The sensor requires no image processing and is designed to enable, among other applications, high-speed autonomous flight.

Researchers have used DVS cameras to enable simple linear systems to see and react to high-speed events, and they have designed controllers, or algorithms, to quickly translate DVS data and carry out appropriate responses. For example, engineers have designed controllers that interpret pixel changes in order to control the movements of a robotic goalie to block an incoming soccer ball, as well as to direct a motorized platform to keep a pencil standing upright.

But for any given DVS system, researchers have had to start from scratch in designing a controller to translate DVS data in a meaningful way for that particular system.

“The pencil and goalie examples are very geometrically constrained, meaning if you give me those specific scenarios, I can design a controller,” Singh says. “But the question becomes, what if I want to do something more complicated?”

Cutting through the noise

In the team’s new paper, the researchers report developing a sort of universal controller that can translate DVS data in a meaningful way for any simple linear, robotic system. The key to the controller is that it identifies the ideal value for a parameter Singh calls “H,” or the event-threshold value, signifying the minimum change in brightness that the system can detect.

Setting the H value for a particular system can essentially determine that system’s visual sensitivity: A system with a low H value would be programmed to take in and interpret changes in luminosity that range from very small to relatively large, while a high H value would exclude small changes, and only “see” and react to large variations in brightness.

The researchers formulated an algorithm first by taking into account the possibility that a change in brightness would occur for every “event,” or pixel activated in a particular system. They also estimated the probability for “spurious events,” such as a pixel randomly misfiring, creating false noise in the data.

Once they derived a formula with these variables in mind, they were able to work it into a well-known algorithm known as an H-infinity robust controller, to determine the H value for that system.

The team’s algorithm can now be used to set a DVS camera’s sensitivity to detect the most essential changes in brightness for any given linear system, while excluding extraneous signals. The researchers performed a numerical simulation to test the algorithm, identifying an H value for a theoretical linear system, which they found was able to remain stable and carry out its function without being disrupted by extraneous pixel events.

“We found that this H threshold serves as a ‘sweet-spot,’ so that a system doesn’t become overwhelmed with too many events,” Singh says. He adds that the new results “unify control of many systems,” and represent a first step toward faster, more stable autonomous flying robots, such as the Robobee, developed by researchers at Harvard University.

“We want to break that speed limit of 20 to 30 miles per hour, and go faster without colliding,” Singh says. “The next step may be to combine DVS with a regular camera, which can tell you, based on the DVS rendering, that an object is a couch versus a car, in real time.”

This research was supported in part by the Singapore National Research Foundation through the SMART Future Urban Mobility project.