An app for safer roads 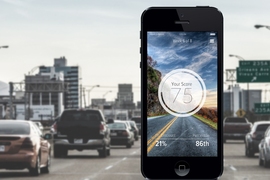 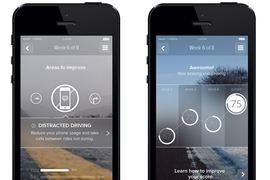 Are you a safe driver? According to MIT alumnus Brad Cordova SM ’13, co-founder of driving-data-analytics startup Censio, you’ll probably answer “yes,” but the real answer may be “no.”

Those who consider themselves safe drivers may tailgate, speed, or use cellphones while driving, which significantly increase the probability of an accident, Cordova says. “For most of us, the most dangerous thing you do from day to day is driving,” he says.

To improve driver safety, Censio has developed an app that captures and analyzes data on driving behavior to show drivers where they can improve. In September, Progressive Insurance began piloting the app with customers nationwide, with aims of reducing insurance rates for good drivers.

In a way, the app acts as a sort of “external brain” for drivers, Cordova says, helping them see the risks associated with certain driving behaviors — especially distracted driving. “The human brain is not good at statistics and probability, so most people aren’t thinking how sending this text will affect their probability of getting into an accident,” he says. “We calculate these complicated probability distributions and send that back to the app in a very digestible way.”

The National Highway Traffic Safety Administration attributes one accident every 24 seconds in the United States to distracted driving; the National Safety Council estimates that 1.6 million crashes annually are due to cellphone use, with another 1 million due to texting while driving.

Beyond safety, there’s also a monetary incentive: The startup hopes to shift insurers toward user-based insurance programs, where rates are based on how well a person drives. Those policies could lower rates for the 200 million insured drivers across the United States, Censio president Kevin Farrell says, but are being held back by the logistics and costs of introducing hardware into cars. “We believe bringing an app into the market really opens things up,” he says.

To capture driving behavior, the app identifies when a person is driving — not, for instance, in the backseat of a cab — and then uses a smartphone’s accelerometer, gyroscope (positioning), and GPS to track driving dynamics. Added to that is external data, such as on speed limit, weather, and street information, such as on safe or dangerous intersections.

Using this data, the app looks for habits such as speeding through intersections and braking hard, which could indicate tailgating or not paying attention to the road. It also observes cellphone use while driving.

Analyzing all this data, the app then scores the driver, on a score of 1 to 100, and keeps track of the habits a driver has, or may need to improve upon. Scores are also compared with other drivers across the nation. A user, for instance, may brake hard more frequently, or pick up their phone less often, than the national average.

That data are shared with insurers to help them assess the overall risk of a particular driver.

Behind the scenes, Cordova says the app earned the business of Progressive, over 10 competitors, because it doesn’t drain a phone’s battery and is as accurate as a hardware-based solution.

Beating battery drain, Cordova says, came down to developing optimization algorithms that collect data only when needed, and shut off when not collecting data. Gaining accuracy, he says, was about cleaning up messy data. “When the data comes in from the car, it’s extremely noisy,” Cordova says. “A lot of the engineering effort went into better signal processing and machine learning to clean up those signals.”

Leaving an engineering position at CERN in 2011, Cordova came to MIT as a PhD student in electrical engineering and computer science with aims of “making a social difference.” (He left after completing his master’s degree to pursue Censio.)

Inspired to launch a startup, Cordova and Adelmann designed a system that used a smartphone to alert people who fall asleep at the wheel. Mounting the camera on the windshield, the camera would track the road and the app would calculate various driving data, such as braking frequency and vehicle positioning.

That system wasn’t exactly practical — but at its core was an app that could collect movement and driving data. As a test, several MIT students downloaded the app to their phones, and it accurately predicted if the students were walking, sitting at a desk, or climbing stairs — and when they were about to get in a car and drive.

But that app drained a phone’s battery with a day of use. “As an engineer, you try to make the most awesome product, but you miss something like battery life,” Cordova says. “We had to go back to the drawing board.”

After much refining, the end product was a prototype for the Censio app that collected necessary data in the background to let drivers know the risks of their behavior.

This prototype landed Cordova and Adelmann a finalist spot in MIT’s $100K Entrepreneurship Competition in 2012. They further developed the business in office space in the Martin Trust Center for MIT Entrepreneurship and Harvard’s Innovation Lab, where they met co-founder Jon McNeill, an entrepreneur with prior experience in the insurance industry, and co-founder Scott Griffith, former CEO of Zipcar.

Three years later, the startup earned its initial funding round of $10 million and the partnership with Progressive, which is offering the app as a replacement for its Snapshot hardware component — a hub that plugs into a car’s onboard diagnostics port — currently being used by more than 3 million participants. The plan is to officially release a commercial version of the app early next year.

Although the app has proven to have a viable business model, Cordova says the mission still harkens back to his MIT years, with a focus on social change: “The aim is to make drivers around the world better and safer.”

Taking stress to a new level