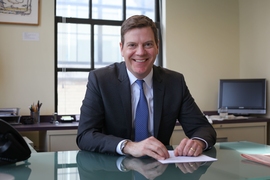 Nate Nickerson, who has reshaped and reinvigorated the MIT News Office as its leader for the past five years, has been named vice president for communications, effective immediately. Kirk Kolenbrander, vice president and secretary of the Corporation, announced the appointment today in an email to MIT faculty and staff.

“More and more, topics at the center of our society — technological innovation, entrepreneurship, energy, big data, robotics, digital learning, human health — overlap with many areas of distinctive strength for MIT,” Kolenbrander wrote. “Since his arrival at the MIT News Office in 2009, Nate has recognized MIT’s global scope, visibility and impact, and transformed that office to keep pace. … Nate has built an exceptional news and media relations team while raising expectations for external communications across the Institute.”

In his new capacity, Nickerson will continue to lead MIT’s central communications strategy, but with greater engagement of communications leadership from across the Institute. He will retain oversight of the News Office, but will also work Institute-wide to better connect its activities with those of the communications professionals who work on behalf of MIT’s schools, departments, labs, and centers — “to make the whole of our communications greater than the sum of its parts,” Nickerson says.

Nickerson will assume responsibility for emerging forms of public engagement, and will offer support to MIT’s upcoming capital campaign. He will also work to ensure that all parts of the Institute attract and retain the finest available communications talent.

“I am honored to be given this appointment, and eager to move forward with the work ahead,” Nickerson says. “All of us at the Institute who work in communications have the opportunity not only to tell MIT’s amazing story to the public, but also to create richer connection within the MIT community, and between it and the world. Communications leadership across the Institute is poised to use that opportunity in ways that can profoundly benefit the family of MIT, on campus and around the world. I’m very grateful to have superb colleagues ready to take our work to the next level.”

As vice president for communications, Nickerson will help MIT fulfill its mission by connecting and informing the Institute’s core and peripheral communities. He will lead three related efforts on behalf of the Institute:

Nickerson joined the MIT News Office in 2009 as part of a reorganization initiated by then-President Susan Hockfield. That restructuring recast the 18-person News Office as a digital-only shop: The printed weekly Tech Talk ceased to be published, but an increased amount of editorial content produced by writers from both within and outside the News Office was posted to the website MIT News, which now reaches hundreds of thousands of readers beyond the MIT community each month. The News Office also manages the Institute’s media relations; its homepage; many of its top-level social media accounts; and the MIT Video website.

“Together, we have over the past six years tried to make the News Office into an organization that is able to serve the MIT community, the media, and the world at large with a level of service worthy of the Institute,” Nickerson says. “I am proud of what my colleagues have accomplished: They have built one of the most-read university news sites in the country; democratized the creation of content on our site so that communications staff across MIT have a home on the Institute’s main news channel; done very well with the media due to a thoughtful and targeted approach to outreach; begun to explore how social media can connect MIT to the world; and managed moments of crisis and emergency with poise and effectiveness. I will continue to derive energy and inspiration from this special group.”

Nickerson received his BA in English in 1992 from Beloit College in Wisconsin. Before joining MIT, he worked in magazine publishing in New York, serving as assistant managing editor of Family Circle from 1993 to 1999 and as managing editor of Fast Company from 2000 to 2003. Nickerson serves on the Public Affairs Committee of the Association of American Universities and on the Communications Advisory Committee of the Council on Competitiveness.