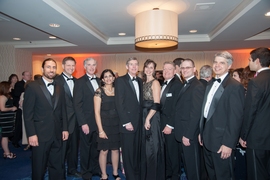 On March 13, the Lunar Laser Communication Demonstration (LLCD) team — which includes several MIT Lincoln Laboratory staff members — received the 2015 Nelson P. Jackson Aerospace Award at the National Space Club's (NSC) annual Robert H. Goddard Memorial Dinner in Washington, D.C. The annual award, given in honor of Jackson, a founding member and past president of the NSC, recognizes an outstanding contribution made to the missile, aircraft, and space field during the preceding year.

LLCD was a mission led by the NASA Goddard Space Flight Center to prove the fundamental concepts of laser communications at extremely long distances. Lincoln Laboratory built the space terminal and primary ground terminal — the Lunar Laser Communication System — for the demonstration.

The LLCD team was selected for the award by a panel of experts headed by Marc C. Johansen, chair of the Nelson P. Jackson Aerospace Award committee and vice president of satellites and intelligence programs at Boeing's government operations office. According to the committee's award citation, LLCD resulted in "a record-breaking achievement using broadband lasers for space communications. Using a pulsed laser beam to communicate and exchange data and high-definition video [sent from a lunar-orbiting terminal] with the main LLCD ground station in White Sands, New Mexico, the team achieved [downlink] rates over six times higher than previous missions [involving radio systems flown to the moon]. LLCD was also able to assist the host mission (Lunar Atmosphere and Dust Environment Explorer, "LADEE") with a download of a 1-gigabyte data set in only a few minutes."

Each year, NSC awards are given to a number of individuals for accomplishments in spaceflight, engineering, science, management, and education. Awards are presented at the Robert H. Goddard Memorial Dinner, which commemorates the anniversary of the first successful flight of a liquid-fueled rocket and brings together nearly 2,000 members of the government, industry, and educational space communities.