Social Media at MIT: How Global Education and Career Development grows its audience 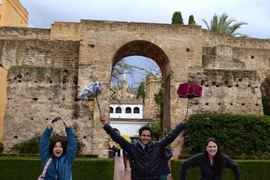 Caption:
Connecting with GECD through social media can help inform students about opportunities to study abroad.

This month our spotlight on social media at MIT zeroes in on Global Education & Career Development (GECD). This student-focused organization offers career services, global experiences, and connections with graduate schools and employers.

Scott Murray, who is both a social media specialist and an advisor for GECD, shares insights about his role and growing an audience for GECD’s social media channels.

GECD resulted from the merger of two separate offices, Career Development and Global Education. A third team, Prehealth Advising, provides support for students interested in applying to medical or health professional schools. While there’s a lot of productive overlap, these areas have different goals and sometimes reach out to different audiences. The best way to manage that, in terms of social media, is to segment and create separate pages, groups, and Twitter handles.

Murray finds that growing an audience is one of his biggest challenges. The first step is to start with a solid strategy, figuring out what kind of information makes the most sense to share on which platform and also to have a clear view of your audiences and their needs. “Giving them what they need is the best way to grow an audience.”

But, Murray observes, it’s not that simple. You have to make your audience aware that these are places they can go to get this information. He encourages GECD staff to promote the digital sphere in their real-life interactions. GECD staff meet students all day in one-on-one settings or in workshops they lead, and those are viable opportunities to say, "Hey, are you on Twitter? You should follow us on Twitter, we’re always putting out useful info. And come like our Facebook page."

It’s the same with print. When you create a poster, put your Twitter handle on it.

One of the best ways for GECD to reach its audience is through the students who are already connected with them. When students go abroad, they often have adventures and come back feeling that they’ve had a very valuable experience. Global Education tries to capitalize on that because hearing a student’s first-hand experience matters a lot more to other students than encouraging words from a GECD staffer.

GECD actively engages these “experienced” students, asking them to speak at their events and send mail to GECD’s opt-in email list. Murray encourages them to visit GECD’s social media platforms and share or retweet posts or engage in the conversation, because they’re connected to other MIT students on those same platforms.

During IAP, GECD sponsored an IAP global photo contest in which they encouraged MIT students studying abroad to share photos via Instagram, Facebook, and Twitter using the #IAPglobal hashtag. By offering prizes, GECD gamified the contest, which helped generate energy around it. You can see many of the photos that were submitted on a Storify page Murray put together called Where Can IAP Take You? (Storify is a tool for curating news from social networks.)

While many MIT students have Facebook pages and fewer are on Twitter, Murray thinks that may be shifting. He sees more and more MIT departments and student groups joining Twitter and finding each other: “A digital version of our real life community is getting built on Twitter.“

Sharing is not as effective on Facebook, but Murray is more disgruntled with Facebook’s recent moves to “prevent GECD from reaching its audience unless we pay them money. They haven’t provided the tools to ensure that, if we pay them, we will reach that target audience."

Facebook’s marketing model would advertise GECD’s programs and services to anyone who has “liked” their Facebook pages. Because of the MIT name, GECD’s Facebook pages attract many people from around the world who may aspire to be part of the MIT community or who just want to know what GECD is up to. But those people are not GECD’s primary audience.

GECD staff know to send Murray items, whether they’re event-related, GECD-related, or come from their own LinkedIn groups. So Murray is not at a loss for material to post on the social media channels he oversees.

Even so, he finds there’s no substitute for sitting down, logging in, scrolling through, and seeing what’s happening right now. “You often find news that way you wouldn’t know about otherwise, and that’s really exciting.”

The other day, as he was checking to see what MIT students were tweeting about, he came across a tweet from an MIT undergrad about the difficulty she was having writing a cover letter. GECD offers advice on resumes and cover letters, so Murray replied and encouraged the student to come in for help. “You don’t get that kind of relationship-building and reaching out if you’re passively accepting content and pushing it out there.”

The role of a social media specialist

The best part of Murray’s role, he says, is also the hardest:

“Social media is on the forefront of a number of other big changes that are happening, culturally, in how we think about content and delivering content to audiences. It’s part of this move from outbound to inbound.

It’s very exciting to help my department think through how these changes will affect the work that we do and how we can adapt to these changes to stay relevant. I really enjoy that. It keeps things interesting.

You have to stay adaptable and be ready to learn new things all the time. The title of social media specialist is funny to me for that reason. I feel like the way I specialize in social media is that I show up to work every day and figure out how to do it, learn what’s going on right now – because it’s probably different from how it was yesterday or last week.”