Research reveals a gender gap in the nation’s biology labs 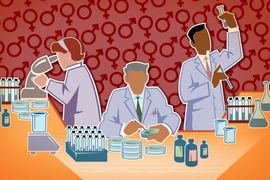 Among the sciences, biology consistently attracts the greatest numbers of women to graduate school and academic careers. About half of all biology graduate students are women, and 40 percent of biology postdocs are female. However, those numbers drop dramatically among faculty members: Nationwide, only 36 percent of assistant professors and 18 percent of full professors are women.

A new study reveals a possible explanation for this discrepancy: In the labs of the highest-achieving male biology professors — winners of the Nobel Prize, the National Medal of Science, and other prestigious awards — women are greatly underrepresented, compared with their overall percentages in the field. Those labs serve as a major pipeline to junior faculty positions at top research institutions, the study found.

“What we found is that these labs really function as a gateway to the professoriate. So we think the fact that they’re not hiring very many women is important for understanding why there are still so few female faculty members,” says Jason Sheltzer, a graduate student in biology at MIT and author of the study, which appears this week in the Proceedings of the National Academy of Sciences.

Bringing attention to this imbalance offers an opportunity for faculty members and institutions to try to remedy the situation, says Angelika Amon, the Kathleen and Curtis Marble Professor in Cancer Research in MIT’s Department of Biology, who is Sheltzer’s PhD thesis advisor but was not involved in this study.

“Once you know what the problem is, you can actually do something about it. It’s a great opportunity for these highly accomplished scientists to really reach out and make a very conscious effort to do something about the gender landscape of science at high-powered research institutions,” Amon says. “A large segment of the population is being excluded from doing high-level research, and that can never be a good thing. We’re losing out on bright and intelligent people.”

Sheltzer and the paper’s other author, Joan Smith, a software engineer and 2013 MIT graduate, studied the nation’s top 24 biology research institutions, as ranked by U.S. News and World Report. They focused on programs such as cell biology, molecular biology, genetics, and biochemistry, which typically attract many women. From individual lab web sites or departmental directories, they were able to determine the number of male and female postdocs and grad students in the labs of 2,062 faculty members.

These gender differences became much more striking when the researchers analyzed the numbers from the labs of “elite” faculty members, which included members of the National Academy of Sciences, Howard Hughes Medical Institute (HHMI) investigators, and winners of seven different major research awards, including the Nobel Prize.

“Looking at this small subset of labs, you get a very different picture than you do when you look at the field as a whole,” Sheltzer says.

However, Sheltzer and Smith found no such imbalances in labs run by elite female faculty members. Female HHMI investigators ran labs with 48 percent female postdocs, compared with 46 percent in labs run by other female scientists.

The study did not explore the reasons for these discrepancies, but Sheltzer offers some possible explanations. “There is a chance that self-selection among female students plays a role — maybe there are fewer applications to these labs from women. In addition to that, there could be conscious or unconscious gender bias on the part of male faculty members, which makes them more reluctant to hire women,” he says.

The application process for grad students or postdocs to work in a particular lab is informal: Usually an applicant emails the lab’s principal investigator to inquire about openings, and there are no official records of how many people apply to work in a particular lab. Analyzing this application process more closely might help institutions figure out whether they should devote more effort to making labs more welcoming to female scientists and recruiting women more actively, the researchers say.

Between 1969 and 2009, the percentage of doctoral degrees awarded to women in the life sciences grew from 15 percent to 52 percent, but women still lag when it comes to faculty appointments. The MIT team believes the new study helps to explain this attrition, known as the “leaky pipeline” problem.

Labs run by high-achieving professors usually have more funding available, more high-profile publications, and better connections with other top researchers, all of which can help young scientists from those labs when applying for scarce faculty positions. At top research institutions, there are typically dozens or even hundreds of applicants for every tenure-track faculty opening.

In this study, the researchers analyzed the employment history of 311 of the assistant professors working at the top 24 research institutions. Of these, 144 had completed a postdoctoral fellowship in one of the labs the researchers surveyed. The researchers found that the principal investigators of the “feeder” labs that produced these top job candidates were much more likely to have markers of elite status. For example, while only 13 percent of the total labs were run by National Academy of Science members, 58 percent of feeder labs were run by those individuals. Overall, the feeder labs employed 14 percent fewer female postdocs than nonfeeder labs.

The findings are consistent with other studies that have documented gender biases in academia, says Corinne Moss-Racusin, an assistant professor of psychology at Skidmore College. In a 2012 PNAS paper, she reported sending science professors identical resumes for a lab manager position in which only the names and genders of the applicants were changed. The male applicants were judged to be more competent and were offered higher starting salaries than female applicants.

“All of this starts to circle around the idea that despite the fact that many faculty are very well-meaning, subtle stereotypes about who is most likely to succeed can impact the judgment and treatment of individuals,” Moss-Racusin says. “This new study really adds a compelling piece of evidence about one of the ways in which gender bias is being encoded in the field.”

In a piece for WBUR, Caroline Erisman writes about a study from MIT researchers showing that elite male faculty tend to hire more men than women when compared to their female counterparts.  “To right that imbalance, we must continue to prepare more women to assume leadership positions in the sciences (and math and engineering too, for that matter),” writes Erisman.

Jena McGregor reports for The Washington Post on a paper coauthored by MIT graduate student Jason Sheltzer that indicates that women are under represented in life sciences laboratories run by elite male scientists. The numbers were significantly less than those in labs headed by females.

In a piece for Slate, Jane Hu examines a new study that finds that elite male faculty members in the life sciences tend to hire fewer women than their female counterparts. “Fifty-two percent of biology Ph.D.s are women, but their representation shrinks to 39 percent at the postdoc level, and only 18 percent at the tenured professor level,” Hu reports.

“Of particular concern, men who have achieved elite status by virtue of awards they have won -- in other words, the men whose labs may be the best launching pads for careers -- are the least likely to hire women who are grad students and postdocs,” writes Scott Jaschik of Inside Higher Ed.

Full story via Inside Higher Education →

“The study suggests that when female trainees are shut out of the top labs, they don’t get access to the resources, networking, and other opportunities that are critical to advancing their careers in academic science,” The Chronicle of Higher Education writes of a new study on gender bias in elite research labs.