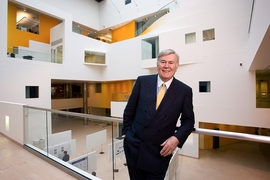 Patrick J. McGovern ’59, a longstanding MIT supporter who made the gift that launched MIT’s McGovern Institute for Brain Research, died March 19 at the age of 76. As an MIT undergraduate, McGovern studied biophysics and later went on to found International Data Group (IDG), a publisher of computer-related news, information, and research.

“Our hearts go out to Lore and the McGovern family for the loss of their beloved Pat,” MIT President L. Rafael Reif says. “The MIT community has lost an extraordinary friend, supporter, advisor, and inspiration — and the world has lost someone with a rare power to see the future and seize its opportunities. Just as Pat launched IDG almost before the computer industry existed, he and Lore grasped very early that brain research would be the next great scientific frontier. Their gift to launch the McGovern Institute provided practical support for fundamental brain science on a scale no one had imagined before; just as important, it played a key role in enabling MIT to build a broader community of brain researchers committed to unraveling and defeating the terrible disorders of the brain — Pat and Lore’s great dream. As we absorb the loss of Pat's friendship, we take consolation in his lasting gift to humankind.”

“Pat and Lore McGovern inspired all of us with their passion to understand the brain and to help people suffering from brain disorders,” says Robert Desimone, director of the McGovern Institute and the Doris and Don Berkey Professor of Neuroscience. “Their gift enabled many new students and faculty to start research careers, and they personally cheered everyone on with each important discovery. Pat will be greatly missed.”

Below is the text of a remembrance of McGovern originally published by the McGovern Institute.

Patrick McGovern was born in 1937 in Queens, New York, and grew up in New York and Philadelphia. He became interested in the brain as a teenager, when he came across a book titled “Giant Brains, or Machines that Think” in the Philadelphia public library. As he recalled in an interview some 50 years later, “It was the first book that talked about computers and their role as an amplifier of the human mind,” and it sparked a lifelong interest in science and technology.

In 1955 Pat was admitted to MIT, where he majored in biophysics. He studied neurophysiology and recalls using a glass electrode to study electrical activity in tadpoles. He also became involved in student newspapers, and after graduating from MIT in the Class of 1959, he was hired as an assistant editor for a new magazine, “Computers and Automation,” founded by Ed Berkeley, the author of the book that had so intrigued him 10 years earlier.

After four years as a magazine editor, Pat left to found his own company, now known as International Data Group (IDG), which under his leadership grew to become the world’s foremost publisher of computer-related news, information and research. IDG today is a multibillion-dollar business, with 2013 revenues of over $3.5 billion.

The story of Pat’s career at IDG has been often told, and his business accomplishments have been recognized with many honors, including lifetime achievement awards from American Business Media and from the Magazine Publishers of America. Yet despite his success and his imposing physical presence, Pat retained a modest demeanor and never cultivated the trappings of great wealth. Instead, he focused his energies on leadership of the company (of which he remained chairman until the time of his death) and increasingly, in his later years, on his philanthropic priorities.

His career and fortune were made in computer technology, but Pat never lost sight of his early dream to understand the brain, which he often described as the world’s most complex computer. When he studied neurophysiology at MIT in the 1950s, the tools were not adequate to the enormous challenge of understanding how the human brain works, but by the 1990s, technological progress had been so dramatic that the field had been transformed almost beyond recognition. A scientific understanding of the brain, while still a daunting challenge, was no longer within the realm of science fiction, but was a real prospect for the future.

Pat’s dream was shared by his wife, Lore Harp McGovern, a Silicon Valley entrepreneur whose interests included health care, education and high tech. In the late 1990s, they decided that the time was right to establish a new institute for brain research, and after consultations with many leading scientists and universities, they decided that the new institute would be at MIT.

Pat and Lore had both been longstanding MIT supporters; Pat was a member of the MIT Corporation, and Lore was chair of the Board of Associates at the affiliated Whitehead Institute. But they always emphasized that their choice of MIT was not simply a matter of loyalty to Pat’s alma mater. They felt that MIT was the right choice because of its alignment with their vision of a multidisciplinary, outward-looking institute that would engage the widest possible range of scientific talents in support of its mission to understand the brain.

One goal was to understand the basis of brain disorders and to lay the foundation for new treatments for conditions such as psychiatric and neurodegenerative diseases — a goal that Pat and Lore considered vitally important, given the enormous suffering and economic costs that are inflicted by these disorders. But their vision was not confined to disease research; they also understood the brain to be the source of our humanity, our creative achievements, and our conflicts, and they saw the possibility that understanding these things in scientific terms could transform the world for the better.

The McGovern Institute for Brain Research was formally established in 2000, with a commitment of $350 million from Pat and Lore, one of the largest philanthropic gifts in the history of higher education. Nobel laureate and Institute Professor Phillip A. Sharp was named founding director; Robert Desimone succeeded Sharp as director in 2004. In the fall of 2005, the McGovern Institute moved into spacious facilities in MIT’s Brain and Cognitive Sciences Complex, one of the most distinctive landmarks on the MIT campus and among the largest neuroscience research buildings in the world.

The McGovern Institute has continued to thrive since it moved to its new home, expanding in size and scope as it has hired new faculty and built new laboratories. Most importantly, it has produced a steady stream of discoveries about the working of the brain, in areas ranging from the genetic control of brain development to the neural basis of human thought and emotion. This progress was deeply gratifying to Pat and Lore, who visited regularly to attend the institute’s board meetings and scientific events, mingling with faculty and researchers and engaging deeply in discussions of their new findings.

Throughout his life, Pat retained an extraordinary ability to absorb new information, and researchers were frequently impressed at his ability to cite detailed facts and figures about the brain. He was a tireless advocate for the institute and its mission, hosting many visits and tours, and inspiring others to follow his philanthropic example. He was, and Lore remains, an enormous source of inspiration and encouragement to the researchers at the institute.

Throughout Pat’s business career, his vision was global, and he took great pride in the fact that IDG was one of the first Western companies to establish a business presence in China after the end of the Cultural Revolution. It is thus fitting that Pat and Lore’s philanthropic vision also extended to China; since 2011, three new IDG/McGovern Institutes have been established in Beijing, at Tsinghua University, Peking (“Beida”) University, and Beijing Normal University. Like the McGovern Institute at MIT, the new institutes in China are focused on fundamental research in neuroscience as well as translational work on disease applications.

Pat always saw brain disorders as global problems that required global solutions, and one of his greatest hopes was that the new institutes would help accelerate the international cooperation that he saw as essential to the ultimate goal of understanding the human brain in health and disease.

Pat’s wife, Lore, has been a full partner throughout the McGovern Institute’s 14-year history, serving on the governing board of the institute along with Pat and his daughter, Elizabeth McGovern. All of us at the institute offer our deepest condolences to Lore, to their four children, and to all of Pat’s family members and friends. He will be greatly missed.

New York Times reporter William Yardley explores the legacy of MIT alumnus Patrick McGovern. “He was often referred to as ‘Uncle Pat’ by the thousands of employees at his company, and he was known for a determinedly human gesture in the cyberworld: traveling the planet to hand-deliver Christmas bonus checks of $500 to everyone who worked for him,” writes Yardley.

“Mr. McGovern, who with his wife, Lore, gave $350 million to open the McGovern Institute for Brain Research at MIT, died Wednesday in Stanford Hospital in Palo Alto, Calif,” writes J. M. Lawrence in The Boston Globe.

Technology writer Glenn Rifkin joins WBUR’s Bob Oakes to discuss the life and career of Patrick McGovern, an MIT alumnus who donated $350 million to create the McGovern Institute for Brain Research at MIT.

The Wall Street Journal’s Stephen Miller and Spencer Ante remember the life and legacy of Patrick McGovern, an MIT alumnus and founder of the McGovern Institute for brain research at MIT, who died Wednesday, March 19 at 76.