New method for propulsion in fluids 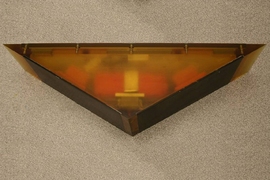 ↓ Download Image
Caption: This wedge-shaped device was used for laboratory tests of the propulsion system based on thermal differences. One of the bottom edges of the device can be heated using internal heaters, activated by a remote control.
Credits: Photo courtesy of Thomas Peacock

Caption:
This wedge-shaped device was used for laboratory tests of the propulsion system based on thermal differences. One of the bottom edges of the device can be heated using internal heaters, activated by a remote control.
Credits:
Photo courtesy of Thomas Peacock

Researchers at MIT have discovered a new way of harnessing temperature gradients in fluids to propel objects. In the natural world, the mechanism may influence the motion of icebergs floating on the sea and rocks moving through subterranean magma chambers.

The discovery is reported this week in the journal Physical Review Letters by associate professor of mechanical engineering Thomas Peacock and four others. The finding was an unexpected outcome of research on other effects of temperature differences, such as the way winds form over glaciers in a valley, Peacock says.

These winds are generated by natural convection that arises from temperature differences between a fluid and a heated or cooled boundary. “People had only ever studied this phenomenon in relation to a fixed object,” Peacock says. But his group realized that “if you can induce these kinds of flows on the boundaries of a floating object, you can generate forces.”

Peacock’s first study of the concept, about four years ago, focused on slow flows caused by diffusion — work that demonstrated that induced boundary flows can generate small propulsive forces. But diffusion is a very gradual process, he says, and the resulting forces are perhaps too small to be exploited.

“I always thought, and expected, that the equivalent flows you could generate by selective heating and cooling of an object could be more significant,” Peacock says.

But perfecting the experimental setup was challenging. Fully calming a floating object and tank of water before beginning a test and devising a way to heat the object without causing ripples or movement were particularly difficult tasks. The team decided to use a metal wedge, about 5 inches long, containing a heating element that could be activated by a remote control unit.

This experiment was the first to demonstrate that a temperature differential between the surface of an object and the surrounding fluid can drive movement — an effect that might have widespread significance in the natural world, and potential for future technologies.

The effect itself is surprisingly simple, Peacock explains: “By virtue of heating or cooling the surface of an object, you change the density of any fluid next to that surface.” In the valley winds previously considered, the object was either a glacier or a valley wall heated by the sun, and the fluid was the air passing over it; in this case, it’s the solid wedge and its surrounding water.

The changed density of the fluid generates a flow over the surface, Peacock says, adding, “That flow then creates unbalanced forces, with lower pressure on one side, and higher on the other” — an imbalance that propels the object from the higher pressure toward the lower.

The phenomenon applies to “any situation where an object is immersed in fluid, and its temperature is different” from that of the fluid, Peacock says.

The basic equations that govern convection are well known, Peacock says. “This type of flow has been studied for over 100 years, but somehow, in all that time, no one had thought to do this.”

Colm-cille Caulfield, an applied mathematician and theoretical physicist at Cambridge University who was not involved in this research, says it is indeed surprising that this phenomenon has been overlooked for so long. “That such a generic and naturally occurring process … has been identified, demonstrated, and explained for the first time is a significant and surprising discovery,” he says.

Caulfield adds that while the initial laboratory proof involved a small object, the effect presumably also applies to larger systems. “The real prize is to demonstrate that this process is also significant on a larger scale,” he says. “If such a scale-up can be achieved, this work has the potential to be central to our understanding and modeling of many environmentally and industrially relevant flows.”

Peacock is already working on such follow-up experiments, to figure out “whether the effect can be exploited, in an engineering sense, and also whether nature might already be exploiting it.”

The method could prove useful in controlling how particles move through microfluidic devices, or in understanding the motion of material floating in magma. It may, Peacock says, even turn out to be something that living organisms have learned to harness: If a very small creature can propel itself by selectively heating or cooling itself, that could turn out to be a significant mechanism, he says.

“It’s very rare in fluid mechanics to discover a new phenomenon like this,” Peacock says. “There are so many fields that this could potentially impact. … I hope other researchers will hear about the effect and investigate it in their particular fields and discover new things.”

In addition to Peacock, the work was carried out by former MIT postdoc Matthieu Mercier, now at the Institut de Mécanique des Fluides de Toulouse in France; MIT affiliates Brian Doyle and Michael Allshouse; and Arezoo Ardekani, now a faculty member at the University of Notre Dame.