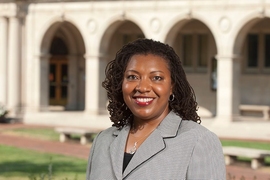 “Lorraine brings a deep understanding of the university environment, organization, and community; broad and progressive HR experience; and a collaborative leadership style,” Ruiz says. “I am delighted that she will be joining MIT.”

“Throughout the recruitment process, I have been impressed by the talented individuals I’ve met, from the search committee to the leadership team, and I am honored to be joining MIT,” Goffe-Rush says. “I am committed to talent development, teamwork, and aligning HR strategies to organizational goals. I look forward to working collaboratively with all members of the Institute in support of the groundbreaking work being done at MIT.”

Previously, as assistant vice chancellor, she was responsible for the development and implementation of policies, programs, and services in the areas of employment, employee relations, human resources management systems, faculty records, staff diversity and inclusion, and learning and organizational development. She has also been responsible for ensuring institutional compliance with applicable laws and regulations, and with meeting the diverse needs of a large campus community.

“At MIT, living up to our mission requires superb talent united in extraordinarily effective teams, all across the Institute,” MIT President L. Rafael Reif says. “Given her impressive record of success in another highly decentralized university, we are fortunate that Lorraine Goffe-Rush has agreed to join us in meeting this challenge.”

Goffe-Rush holds a BA in business administration from William Woods University in Fulton, Mo., awarded in 1986; later, in 1992, she earned an MBA from National University in San Diego. Her first job after college was as a manager of operations, customer service, and purchasing at a small medical supply company in St. Louis — a role that led her to pursue a career in human resources.

After marrying and moving to San Diego, Goffe-Rush accepted her first human resources job at Fornaca Family Bakery, then the largest privately-owned bakery in Southern California. In 1992, she joined San Diego Gas & Electric Co., where she was promoted to a supervisory human resources role, overseeing compensation, benefits, and employee relations for approximately 4,000 employees.

Goffe-Rush returned to St. Louis with her husband in 1998 to be closer to family, joining Barnes-Jewish Hospital as a senior human resources consultant. In 1999, she became manager of human resources at St. Louis Children’s Hospital, overseeing compensation, benefits, recruitment support, and employee activities.

Since joining Washington University in 2000, Goffe-Rush has helped implement improvements in human resources processes and make more effective use of technology, including the development of an electronic document-management system. She has led the university’s Affirmative Action Compliance Review Team and outsourced paper-intensive employment- and income-verification processes, allowing for more efficient use of staff resources.