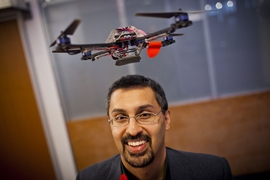 Friends and colleagues were aware, at some level, that Nick Roy, a researcher in MIT's Computer Science and Artificial Intelligence Laboratory (CSAIL), had been using his sabbatical to take on some sort of robotics-related role at Google.

But few people knew the full scope of his work until this past week, when Google X — the infamous idea incubator known for Google Glass, self-driving cars, and wireless hot-air balloons — unveiled a video introducing Project Wing, an ambitious delivery-drone initiative that Roy has overseen for the past two years.

Project Wing lined up nicely with Roy’s work as head of CSAIL’s Robust Robotics Group, which focuses in part on sensing, planning, and controlling unmanned vehicles in environments without GPS. He even brought on board a handful of key MIT collaborators, including recent graduates Abraham Bachrach PhD ’13 and Adam Bry SM ’11, whose state-estimation algorithms have drastically improved unmanned aerial vehicle (UAV) navigation in indoor spaces.

“The culture at Google X is surprisingly similar to CSAIL,” Roy says. “They’re both forums for ideas, where people are thinking not just about what can be fixed today, but the big questions that, ten or twenty years down the road, we’ll look back at and wonder how they hadn’t been answered yet.”

One of the first key challenges was figuring out an effective drone design. Roy’s team assessed the strengths and drawbacks of a variety of prototypes: fixed-wing planes, for instance, fly far and fast, but can’t avoid obstacles readily, while quadrotors maneuver well but are much less energy-efficient.

For the most recent slate of test flights, the team opted for the best of both worlds with a “tail-sitter,” which takes off like a helicopter and tilts forward to fly like a traditional plane. Such a design requires some exceedingly complex control algorithms in order for the drone to nimbly switch between moving air horizontally and vertically.

To help guide the drones, Roy’s team outfitted each one with comprehensive on-board electronics that include two communications radios, advanced computers, GPS, a camera, a capacitor, an inertial measurement unit with a full set of accelerometers and gyroscopes, and multiple lithium-ion batteries.

For delivery, each drone also has what Google calls “the egg,” a device with a cable that winches the packages to the ground. Roy confesses that he initially viewed it as “a terrible idea,” but later came to find that it was much safer and more accurate than deploying parachutes or actually landing the drone. (The final iteration of “the egg” was designed by mechanical engineering alumnus Joanna Cohen SM ’07.)

Roy is quick to point out that the project is still very much a work in progress. “By no means have we fully ‘solved’ problems like avoiding obstacles or navigating in urban environments,” he says. “However, we’ve shown that the potential is there and that this sort of technology is not as far off as many people might think.”

Now back at CSAIL, Roy will continue to serve as an advisor on Project Wing, and says he’s eager to see how his group’s areas of interest intersect with the initiative. Postdoc Marek Doniec’s work on UAVs uses a similar tail-sitter design, while graduate student Jake Ware’s research on flight in robust wind conditions is actually supported by Google.

Ultimately Roy says that he’s proud to have been part of what could end up being a hugely transformative research effort. “This could take a lot of the friction out of the way that we move things around in the world,” Roy says. “But what’s truly exciting is the recognition that the most compelling application is probably something that people aren’t even thinking about right now.”