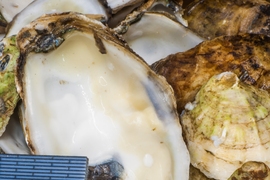 ↓ Download Image
Caption: This photo shows the brick-and-mortar pattern of simulated bone and nacre against the backdrop of real nacre found in the inner shell of many molluscs.
Credits: Photo: Graham Bratzel

Caption:
This photo shows the brick-and-mortar pattern of simulated bone and nacre against the backdrop of real nacre found in the inner shell of many molluscs.
Credits:
Photo: Graham Bratzel
Researchers working to design new materials that are durable, lightweight and environmentally sustainable are increasingly looking to natural composites, such as bone, for inspiration: Bone is strong and tough because its two constituent materials, soft collagen protein and stiff hydroxyapatite mineral, are arranged in complex hierarchical patterns that change at every scale of the composite, from the micro up to the macro.

While researchers have come up with hierarchical structures in the design of new materials, going from a computer model to the production of physical artifacts has been a persistent challenge. This is because the hierarchical structures that give natural composites their strength are self-assembled through electrochemical reactions, a process not easily replicated in the lab.

Now researchers at MIT have developed an approach that allows them to turn their designs into reality. In just a few hours, they can move directly from a multiscale computer model of a synthetic material to the creation of physical samples.

In a paper published online June 17 in Advanced Functional Materials, associate professor Markus Buehler of the Department of Civil and Environmental Engineering and co-authors describe their approach. Using computer-optimized designs of soft and stiff polymers placed in geometric patterns that replicate nature’s own patterns, and a 3-D printer that prints with two polymers at once, the team produced samples of synthetic materials that have fracture behavior similar to bone. One of the synthetics is 22 times more fracture-resistant than its strongest constituent material, a feat achieved by altering its hierarchical design.

Two are stronger than one

The collagen in bone is too soft and stretchy to serve as a structural material, and the mineral hydroxyapatite is brittle and prone to fracturing. Yet when the two combine, they form a remarkable composite capable of providing skeletal support for the human body. The hierarchical patterns help bone withstand fracturing by dissipating energy and distributing damage over a larger area, rather than letting the material fail at a single point.

“The geometric patterns we used in the synthetic materials are based on those seen in natural materials like bone or nacre, but also include new designs that do not exist in nature,” says Buehler, who has done extensive research on the molecular structure and fracture behavior of biomaterials. His co-authors are graduate students Leon Dimas and Graham Bratzel, and Ido Eylon of the 3-D printer manufacturer Stratasys. “As engineers we are no longer limited to the natural patterns. We can design our own, which may perform even better than the ones that already exist.”

The researchers created three synthetic composite materials, each of which is one-eighth inch thick and about 5-by-7 inches in size. The first sample simulates the mechanical properties of bone and nacre (also known as mother of pearl). This synthetic has a microscopic pattern that looks like a staggered brick-and-mortar wall: A soft black polymer works as the mortar, and a stiff blue polymer forms the bricks. Another composite simulates the mineral calcite, with an inverted brick-and-mortar pattern featuring soft bricks enclosed in stiff polymer cells. The third composite has a diamond pattern resembling snakeskin. This one was tailored specifically to improve upon one aspect of bone’s ability to shift and spread damage.

A step toward ‘metamaterials’

The team confirmed the accuracy of this approach by putting the samples through a series of tests to see if the new materials fracture in the same way as their computer-simulated counterparts. The samples passed the tests, validating the entire process and proving the efficacy and accuracy of the computer-optimized design. As predicted, the bonelike material proved to be the toughest overall.

“Most importantly, the experiments confirmed the computational prediction of the bonelike specimen exhibiting the largest fracture resistance,” says Dimas, who is the first author of the paper. “And we managed to manufacture a composite with a fracture resistance more than 20 times larger than its strongest constituent.”

“This research is a wonderful example of how 3-D printing can be used to fabricate complex architectures that emulate those found in nature,” says Jennifer Lewis, the Hansjörg Wyss Professor of Biologically Inspired Engineering at Harvard University. “The power of integrating design, computational modeling and 3-D assembly will only be fully realized when these tools are combined to generate entirely new ‘metamaterials’ — in other words, ones that today do not exist in either engineered or biological forms. This work represents an important step toward this objective.”

According to Buehler, the process could be scaled up to provide a cost-effective means of manufacturing materials that consist of two or more constituents, arranged in patterns of any variation imaginable and tailored for specific functions in different parts of a structure. He hopes that eventually entire buildings might be printed with optimized materials that incorporate electrical circuits, plumbing and energy harvesting. “The possibilities seem endless, as we are just beginning to push the limits of the kind of geometric features and material combinations we can print,” Buehler says.

The work was funded by the U.S. Army Research Office.