Are you a Martian?

We all could be, scientists say — and an MIT-developed instrument might someday provide the proof
David L. Chandler, MIT News Office
Publication Date:
Press Inquiries 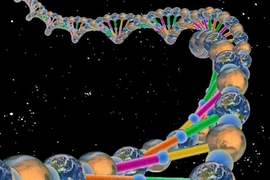 Credits:
Graphic: Christine Daniloff
Are we all Martians? According to many planetary scientists, it's conceivable that all life on Earth is descended from organisms that originated on Mars and were carried here aboard meteorites. If that's the case, an instrument being developed by researchers at MIT and Harvard could provide the clinching evidence.

In order to detect signs of past or present life on Mars — if it is in fact true that we're related — then a promising strategy would be to search for DNA or RNA, and specifically for particular sequences of these molecules that are nearly universal in all forms of terrestrial life. That's the strategy being pursued by MIT research scientist Christopher Carr and postdoctoral associate Clarissa Lui, working with Maria Zuber, head of MIT's Department of Earth, Atmospheric and Planetary Sciences (EAPS), and Gary Ruvkun, a molecular biologist at the Massachusetts General Hospital and Harvard University, who came up with the instrument concept and put together the initial team. Lui presented a summary of their proposed instrument, called the Search for Extra-Terrestrial Genomes (SETG), at the IEEE Aerospace Conference this month in Big Sky, Mont.

The idea is based on several facts that have now been well established. First, in the early days of the solar system, the climates on Mars and the Earth were much more similar than they are now, so life that took hold on one planet could presumably have survived on the other. Second, an estimated one billion tons of rock have traveled from Mars to Earth, blasted loose by asteroid impacts and then traveling through interplanetary space before striking Earth's surface. Third, microbes have been shown to be capable of surviving the initial shock of such an impact, and there is some evidence they could also survive the thousands of years of transit through space before arriving at another planet.

So the various steps needed for life to have started on one planet and spread to another are all plausible. Additionally, orbital dynamics show that it's about 100 times easier for rocks to travel from Mars to Earth than the other way. So if life got started there first, microbes could have been carried here and we might all be its descendants.

If we are descendants from Mars, there might be important lessons to be learned about our own biological origins by studying biochemistry on our neighbor planet, where biological traces erased long ago here on Earth might have been preserved in the Martian deep freeze.

The MIT researchers' device would take samples of Martian soil and isolate any living microbes that might be present, or microbial remnants (which can be preserved for about up to a million years and still contain viable DNA), and separate out the genetic material in order to use standard biochemical techniques to analyze their genetic sequences.

Even a few years ago, that might have seemed like more of a long shot, but recent Mars orbiter and rover missions have clearly shown that Mars once had abundant water, and many of the conditions thought to be needed to support life. And although the surface of Mars today is too cold and dry to support known life forms, there is evidence that liquid water may exist not far below the surface. "On Mars today, the best place to look for life is in the subsurface," Carr says.

So the team has been developing a device that could take a sample of Martian soil from below the surface — perhaps dredged up by a rover equipped with a deep drill — and process it to separate out any possible organisms, amplify their DNA or RNA using the same techniques used for forensic DNA testing on Earth, and then use biochemical markers to search for signs of particular, genetic sequences that are nearly universal among all known life forms.

The researchers estimate that it could take two more years to complete the design and testing of a prototype SETG device. Although the proposed device has not yet been selected for any upcoming Mars mission, a future mission with a lander or rover equipped with a drill could potentially carry this life-detection instrument.

No instrument has been sent to Mars specifically to look for evidence of life since NASA's twin Viking landers in 1976, which produced tantalizing but ambiguous results. An instrument on the Mars Science Lander to be launched in the fall will investigate chemistry relevant to life. The instrument from the MIT-Harvard team directly addresses Earth-like molecular biology.

Christopher McKay, an astrobiologist at NASA-Ames Research Center in California who specializes in research related to the possibility of life on Mars, says this work is "very interesting and important." He says, "it is not implausible that life on Mars will be related to life on Earth and therefore share a common genetics. In any case it would be important to test this hypothesis." But he adds that there is another motive for doing this research as well: "From an astronaut health and safety point of view and from a return-sample point of view, there is more to worry about" if there are organisms closely related to us on Mars, since a microbe that is similar is much more likely to be infectious to terrestrial life forms than would a totally alien microbe — so it is very important to be able to detect such life forms if they are present on Mars. In addition, this method could also detect any biological contamination on Mars that has been brought by spacecraft from Earth.

This kind of test is something we have the ability to do, he says, and therefore, although such an experiment has not yet been formally approved, "it seems improbable to me that we will do a serious search for life on Mars and not do this test."