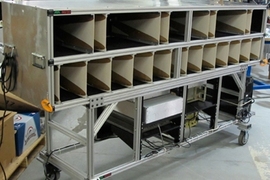 ↓ Download Image
Caption: The front of the phased array radar system developed by researchers at MIT’s Lincoln Laboratory, which sends and receives signals of movement behind solid concrete walls.
Credits: Photo provided by the researchers 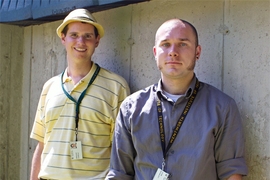 Caption:
The front of the phased array radar system developed by researchers at MIT’s Lincoln Laboratory, which sends and receives signals of movement behind solid concrete walls.
Credits:
Photo provided by the researchers

The ability to see through walls is no longer the stuff of science fiction, thanks to new radar technology developed at MIT’s Lincoln Laboratory.

Much as humans and other animals see via waves of visible light that bounce off objects and then strike our eyes’ retinas, radar “sees” by sending out radio waves that bounce off targets and return to the radar’s receivers. But just as light can’t pass through solid objects in quantities large enough for the eye to detect, it’s hard to build radar that can penetrate walls well enough to show what’s happening behind. Now, Lincoln Lab researchers have built a system that can see through walls from some distance away, giving an instantaneous picture of the activity on the other side.

The researchers’ device is an unassuming array of antenna arranged into two rows — eight receiving elements on top, 13 transmitting ones below — and some computing equipment, all mounted onto a movable cart. But it has powerful implications for military operations, especially “urban combat situations,” says Gregory Charvat, technical staff at Lincoln Lab and the leader of the project.

Walls, by definition, are solid, and that’s certainly true of the four- and eight-inch-thick concrete walls on which the researchers tested their system.

At first, their radar functions as any other: Transmitters emit waves of a certain frequency in the direction of the target. But in this case, each time the waves hit the wall, the concrete blocks more than 99 percent of them from passing through. And that’s only half the battle: Once the waves bounce off any targets, they must pass back through the wall to reach the radar’s receivers — and again, 99 percent don’t make it. By the time it hits the receivers, the signal is reduced to about 0.0025 percent of its original strength.

But according to Charvat, signal loss from the wall is not even the main challenge. “[Signal] amplifiers are cheap,” he says. What has been difficult for through-wall radar systems is achieving the speed, resolution and range necessary to be useful in real time. “If you’re in a high-risk combat situation, you don’t want one image every 20 minutes, and you don’t want to have to stand right next to a potentially dangerous building,” Charvat says.

The Lincoln Lab team’s system may be used at a range of up to 60 feet away from the wall. (Demos were done at 20 feet, which Charvat says is realistic for an urban combat situation.) And, it gives a real-time picture of movement behind the wall in the form of a video at the rate of 10.8 frames per second.

One consideration for through-wall radar, Charvat says, is what radio wavelength to use. Longer wavelengths are better able to pass through the wall and back, which makes for a stronger signal; however, they also require a correspondingly larger radar apparatus to resolve individual human targets. The researchers settled on S-band waves, which have about the same wavelength as wireless Internet — that is, fairly short. That means more signal loss — hence the need for amplifiers — but the actual radar device can be kept to about eight and a half feet long. “This, we believe, was a sweet spot because we think it would be mounted on a vehicle of some kind,” Charvat says.

Even when the signal-strength problem is addressed with amplifiers, the wall — whether it’s concrete, adobe or any other solid substance — will always show up as the brightest spot by far. To get around this problem, the researchers use an analog crystal filter, which exploits frequency differences between the modulated waves bouncing off the wall and those coming from the target. “So if the wall is 20 feet away, let’s say, it shows up as a 20-kilohertz sine wave. If you, behind the wall, are 30 feet away, maybe you’ll show up as a 30-kilohertz sine wave,” Charvat says. The filter can be set to allow only waves in the range of 30 kilohertz to pass through to the receivers, effectively deleting the wall from the image so that it doesn’t overpower the receiver.

“It’s a very capable system mainly because of its real-time imaging capability,” says Robert Burkholder, a research professor in Ohio State University’s Department of Electrical and Computer Engineering who was not involved with this work. “It also gives very good resolution, due to digital processing and advanced algorithms for image processing. It’s a little bit large and bulky for someone to take out in the field,” he says, but agrees that mounting it on a truck would be appropriate and useful.

In a recent demonstration, Charvat and his colleagues, Lincoln Lab assistant staff John Peabody and former Lincoln Lab technical staff Tyler Ralston, showed how the radar was able to image two humans moving behind solid concrete and cinder-block walls, as well as a human swinging a metal pole in free space. The project won best paper at a recent conference, the 2010 Tri-Services Radar Symposium.

Because the processor uses a subtraction method — comparing each new picture to the last, and seeing what’s changed — the radar can only detect moving targets, not inanimate objects such as furniture. Still, even a human trying to stand still moves slightly, and the system can detect these small movements to display that human’s location.

The system digitizes the signals it receives into video. Currently, humans show up as “blobs” that move about the screen in a bird’s-eye-view perspective, as if the viewer were standing on the wall and looking down at the scene behind. The researchers are currently working on algorithms that will automatically convert a blob into a clean symbol to make the system more end-user friendly. “To understand the blobs requires a lot of extra training,” Charvat says.

With further refinement, the radar could be used domestically by emergency-response teams and others, but the researchers say they developed the technology primarily with military applications in mind. Charvat says, “This is meant for the urban war fighter … those situations where it’s very stressful and it’d be great to know what’s behind that wall.”