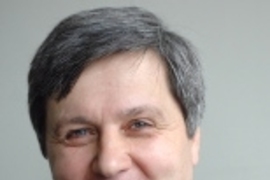 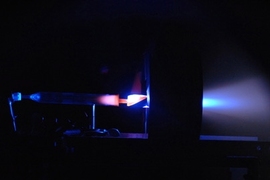 ↓ Download Image
Caption: The prototype of a new plasma rocket is tested in the lab of Department of Aeronautics and Astronautics principal researcher Oleg V. Batishchev at MIT.
Credits: Photo / Donna Coveney 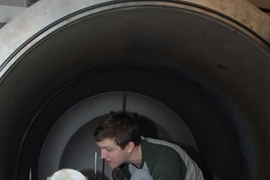 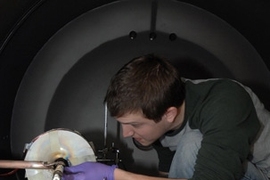 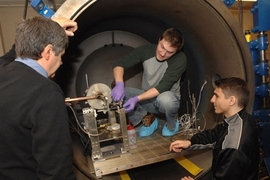 Caption:
The prototype of a new plasma rocket is tested in the lab of Department of Aeronautics and Astronautics principal researcher Oleg V. Batishchev at MIT.
Credits:
Photo: Donna Coveney

Caption:
Department of Aeronautics and Astronautics graduate student Taylor Matlock, center, principal research scientist Oleg V. Batishchev, left, and Dan Stiurca, junior in electrical engineering and computer science, right, work on adjusting a prototype of a new plasma rocket.
Credits:
Photo: Donna Coveney
Satellites orbiting the Earth must occasionally be nudged to stay on the correct path. MIT scientists are developing a new rocket that could make this and other spacecraft maneuvers much less costly, a consideration of growing importance as more private companies start working in space.

The new system, called the Mini-Helicon Plasma Thruster, is much smaller than other rockets of its kind and runs on gases that are much less expensive than conventional propellants. As a result, it could slash fuel consumption by 10 times that of conventional systems used for the same applications, says Oleg Batishchev, a principal research scientist in the Department of Aeronautics and Astronautics and leader of the work.

The current propulsion systems — used for maintaining a satellite's orbit, pushing a spacecraft from one orbit to another, and otherwise maneuvering in space — rely on chemical reactions that occur within the fuel, releasing energy that ultimately propels the object.

Although such systems have brought humans to the moon and are regularly used in a variety of other applications, they have limitations. For example, chemical rockets are expensive largely due to the amount of fuel they use.

As a result, engineers have been developing alternative, non-chemical rockets. In these, an external source of electrical energy is used to accelerate the propellant that provides the thrust for moving a craft through space.

Such non-chemical rockets have been successfully used by NASA and the European Space Agency in missions including NASA's Deep Space 1, which involved the flyby of a comet and asteroid.

But the field is still relatively new, and these advanced rockets are one focus of the MIT Space Propulsion Laboratory (SPL). "The Mini-Helicon is one exciting example of the sorts of thrusters one can devise using external electrical energy instead of the locked-in chemical energy," says Manuel Martinez-Sanchez, director of the SPL and a professor in the Department of Aeronautics and Astronautics.

The Mini-Helicon is the first rocket to run on nitrogen, the most abundant gas in our atmosphere.

It was conceived through work with former astronaut Franklin Chang-Diaz ScD '77 on a much larger, more powerful system developed by Chang-Diaz. Batishchev's team did a theoretical analysis showing that the first of three parts of the larger rocket could potentially be used alone for different applications.

The idea "was that a rocket based on the first stage [of Chang-Diaz's system] could be small and simple, for more economical applications," says Batishchev, who notes that the team's prototype would fit in a large shoe box.

Since then, 12 MIT students have worked on the Mini-Helicon, resulting in one PhD and four master's theses to date. Batishchev notes, however, that it could be years before the technology can be used commercially, in part due to certification policies through NASA and other agencies.

The Mini-Helicon has three general parts: a quartz tube wrapped by a coiled antenna, with magnets surrounding both. The gas of interest is pumped into the quartz tube, where radio frequency power transmitted to the gas from the antenna turns the gas into plasma, or electrically charged gas.

The magnets not only help produce the plasma, but also confine, guide and accelerate it through the system. "The plasma beam exhausted from the tube is what gives us the thrust to propel the rocket," Batishchev says.

Batishchev notes that last summer, for fun, his team built a plasma rocket based on a glass bottle (a stand-in for the quartz tube) and an aluminum can (the radio-frequency antenna), both of which previously held soft drinks. It worked. "This shows that this is a robust, simple design. So in principle, an even simpler design could be developed," he says.

This work was funded by the Air Force Research Laboratory.

During a special screening of “Black Panther: Wakanda Forever,” students shared their enthusiasm at seeing MIT on the big screen.