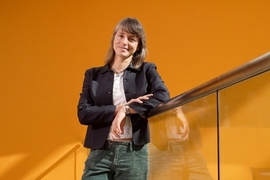 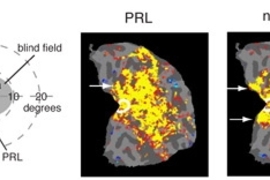 ↓ Download Image
Caption: Left: A macular degeneration patient suffers vision loss in the central visual field of the retina (fovea) and uses a new fixation (PRL, preferred retinal locus) in the lower periphery for tasks such as reading. Visual stimuli were presented at the PRL and another peripheral location (nonPRL).

Caption:
Left: A macular degeneration patient suffers vision loss in the central visual field of the retina (fovea) and uses a new fixation (PRL, preferred retinal locus) in the lower periphery for tasks such as reading. Visual stimuli were presented at the PRL and another peripheral location (nonPRL).

In macular degeneration, the most common form of adult blindness, patients progressively lose vision in the center of their visual field, thereby depriving the corresponding part of the visual cortex of input. Previously, researchers discovered that the deprived neurons begin responding to visual input from another spot on the retina -- evidence of plasticity in the adult cortex.

Just how such plasticity occurred was unknown, but a new MIT study sheds light on the underlying neural mechanism.

"This study shows us one way that the brain changes when its inputs change. Neurons seem to 'want' to receive input: when their usual input disappears, they start responding to the next best thing," said Nancy Kanwisher of the McGovern Institute for Brain Research at MIT and senior author of the study appearing in the March 4 issue of the Journal of Neuroscience.

"Our study shows that the changes we see in neural response in people with MD are probably driven by the lack of input to a population of neurons, not by a change in visual information processing strategy," said Kanwisher, the Ellen Swallow Richards Professor of Cognitive Neuroscience in MIT's Department of Brain and Cognitive Sciences.

Macular degeneration affects 1.75 million people in the United States alone. Loss of vision begins in the fovea of the retina -- the central area providing high acuity vision that we use for reading and other visually demanding tasks. Patients typically compensate by using an adjacent patch of undamaged retina. This "preferred retinal locus" (PRL) is often below the blind region in the visual field, leading patients to roll their eyes upward to look at someone's face, for example.

The visual cortex has a map of the visual field on the retina, and in macular degeneration the neurons mapping to the fovea no longer receive input. But several labs, including Kanwisher's, previously found that the neurons in the visual cortex that once responded only to input from central vision begin responding to stimuli at the PRL. In other words, the visual map has reorganized.

"We wanted to know if the chronic, prior use of the PRL causes the cortical change that we had observed in the past, according to what we call the use-dependent hypothesis," said first author Daniel D. Dilks, a postdoctoral fellow in the Kanwisher lab. "Or, do the deprived neurons respond to stimulation at any peripheral location, regardless of prior visual behavior, according to the use-independent hypothesis?"

The previous studies could not answer this question because they had only tested patients' PRL. This new study tests both the PRL and another peripheral location, using functional magnetic resonance imaging (fMRI) to scan two macular degeneration patients who had no central vision, and consequently had a deprived central visual cortex.

Because patients habitually use the PRL like a new fovea, it could be that the deprived cortex might respond preferentially to this location.

But that is not what the researchers found. Instead, the deprived region responded equally to stimuli at both the preferred and nonpreferred locations.

This finding suggests that the long-term change in visual behavior is not driving the brain's remapping. Instead, the brain changes appear to be a relatively passive response to visual deprivation.

"Macular degeneration is a great opportunity to learn more about plasticity in the adult cortex," Kanwisher said. If scientists could one day develop technologies to replace the lost light-sensitive cells in the fovea, patients might be able to recover central vision since the neurons there are still alive and well.

Chris Baker of the Laboratory of Brain and Cognition (NIMH) and Eli Peli of the Schepens Eye Research Institute also contributed to this study, which was supported by the NIH, Kirschstein-NRSA, and Dr. and Mrs. Joseph Byrne.