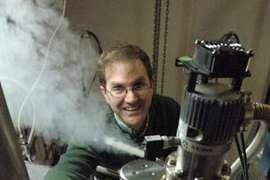 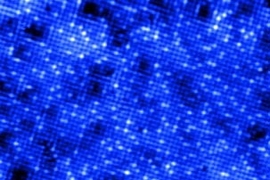 ↓ Download Image
Caption: In this topographic image of a superconductor, some of the superconductor's atoms have been replaced with lead atoms.
Credits: Image / Kamalesh Chatterjee

Caption:
In this topographic image of a superconductor, some of the superconductor's atoms have been replaced with lead atoms.
Credits:
Image / Kamalesh Chatterjee

MIT physicists have taken a step toward understanding the puzzling nature of high-temperature superconductors, materials that conduct electricity with no resistance at temperatures well above absolute zero.

If superconductors could be made to work at temperatures as high as room temperature, they could have potentially limitless applications. But first, scientists need to learn much more about how such materials work.

Using a new method, the MIT team made a surprising discovery that may overturn theories about the state of matter in which superconducting materials exist just before they start to superconduct. The findings are reported in the February issue of Nature Physics.

Understanding high-temperature superconductors is one of the biggest challenges in physics today, according to Eric Hudson, MIT assistant professor of physics and senior author of the paper.

Such high-temperature superconductors are now beginning to be used for many applications, including cell-phone base stations and a demo magnetic-levitation train. But their potential applications could be much broader.

"If you could make superconductors work at room temperature, then the applications are endless," said Hudson.

Superconductors are superior to ordinary metal conductors such as copper because current doesn't lose energy as wasteful heat as it flows through them, thus allowing larger current densities. Once a current is set in motion in a closed loop of superconducting material, it will flow forever.

In the Nature Physics study, the MIT researchers looked at a state of matter that superconductors inhabit just above the temperature at which they start to superconduct.

When a material is in a superconducting state, all electrons are at the same energy level. The range of surrounding, unavailable electron energy levels is called the superconducting gap. It is a critical component of superconduction, because it prevents electrons from scattering, thus eliminating resistance and allowing the unimpeded flow of current.

Just above the transition temperature when a material starts to superconduct is a state called the pseudogap. This state of matter is not at all well understood, said Hudson.

The researchers decided to investigate the nature of the pseudogap state by studying the properties of electron states that were believed to be defined by the characteristics of superconductors: the states surrounding impurities in the material.

It had already been shown that natural impurities in a superconducting material, such as a missing or replaced atom, allow electrons to reach energy levels that are normally within the superconducting gap, so they can scatter. This can be observed using scanning tunneling microscopy (STM).

This method of comparing the pseudogap and superconducting state using STM could help physicists understand why certain materials are able to superconduct at such relatively high temperatures, said Hudson.

"Trying to understand what the pseudogap state is is a major outstanding question," he said.

Lead author of the paper is Kamalesh Chatterjee, a graduate student in physics. MIT physics graduate students Michael Boyer and William Wise are also authors of the paper, along with Takeshi Kondo of the Ames Laboratory at Iowa State University and T. Takeuchi and H. Ikuta of Nagoya University, Japan.

The research was funded by the National Science Foundation and the Research Corporation.