Smoot reflects on his measurement feat as 50th anniversary nears 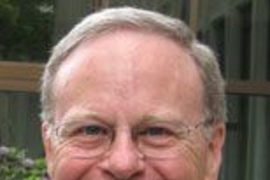 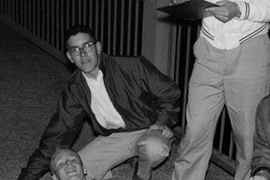 Caption:
Alumnus Oliver Smoot "62 is used to measure the Massachusetts Avenue bridge in 1958.
Credits:
Photo courtesy of the MIT Museum

"It was pretty cold," he said.

Smoot '62 recalled memories recently about the night his name became a unit of measurement as MIT prepares to celebrate the 50th anniversary of the quirky hack. A series of events has been planned for the weekend of Oct. 4.

"Looking at the pictures, I think I had one sweater and I did have on gloves — but basically we all had on windbreakers and you get out in the middle of a bridge and it's windy," he said. "Even if the temperature isn't that low, it's cold out there."

In 1958, as a freshman at MIT and Lambda Chi Alpha pledge, the fraternity pledgemaster hatched the idea to use the shortest — and most scientifically named pledge — to measure the bridge from Boston to Cambridge. Little did they know, however, that their activity would make its way into MIT, Boston and even Google lore.

They also underestimated how difficult getting up and down 364.4 times (plus or minus an ear) would be.

"I don't think any of us had the slightest idea how much work was involved with lying down, getting up," he said. "They had to help me a great way across the bridge. I started by doing a push-up, and then I couldn't even do that. It deteriorated from there."

As they neared the end of their task, a police van drove by, and made a U-turn back toward the students. Luckily, it was a false alarm — but Smoot notes that today their activity probably would garner more scrutiny.

"How would something like this be looked at today? Would the cops in the car stop and make a U-turn and check things out," he said. "Or would they see five or six male adults on the bridge with something that looked like canisters."

After the job was done, Smoot said he and his compatriots didn't give much thought to what would happen to the "Smoot marks." He graduated in 1962, started law school at Georgetown University shortly thereafter, and got married in 1964.

"There was a lot going on, so I basically didn't give it a thought," he said. "I don't recall actually thinking about it, or getting a note or having a conversation with my brothers."

That was until he gave an interview to a reporter at the now-defunct "Holiday magazine" who was investigating the strange marks on the bridge that were repainted each year by incoming Lambda Chi Alpha students. Then, he said, it seemed to take off.

And if he had to do it all over again, today? Well, Smoot admits he's not as strong as he used to be, but otherwise the results should be the same.

"Well as far as I can tell, and I think the meter stick we're going to give to the MIT Museum will confirm, I haven't really shrunk yet," he laughed. "I'm surprised."

And Smoot enjoys the distinction of being both a decorated professional in the standards industry (serving as a vice president Information Technology Industry Council and chairman of the American National Standards Institute's Board of Directors) and a standardized unit of measurement himself.

A Smoot is recognized enough that it's even possible to use Google's calculator function to change any measurement into Smoots.

"It's interesting to see how far apart things are," Smoot noted. "Say it's 400 miles from Washington to Boston — it's much more than that [in Smoots]."

In an article for Physics World about unique scales of measurement, Stephen Ornes highlights the “smoot,” a measurement of distance equivalent to the height of MIT alumnus Oliver Smoot. Ornes, who spoke with Smoot for the story, notes that he “eventually led the leading organizations behind setting standards of measurement.”