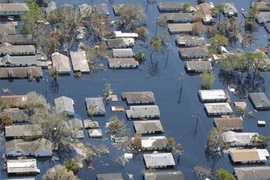 An op-ed by Karl F. Seidman, senior lecturer and head of the Housing, Community and Economic Development program group, MIT Deparment of Urban Studies and Planning

The rebuilding of New Orleans has relied heavily on a laissez-faire approach in which resources are focused on addressing individual rebuilding decisions and neighborhoods must "prove" their viability to receive public services and investment. A new strategy is needed that moves beyond large projects and an individual market-based rebuilding philosophy to pursuing coordinated neighborhood rebuilding and establishing strong institutional capacity for community development.

Students and faculty at MIT's Department of Urban Studies and Planning have worked on rebuilding in multiple neighborhoods, supported civic engagement and researched issues such as school reopening, food access, environmental justice and implementation of the Unified Plan. This work, and knowledge of revitalization initiatives elsewhere in the United States, provides a unique vantage point to take stock of the current situation in New Orleans.

The current laissez-faire approach, while feasible for some parts of the city, has reinforced and worsened the racial and class disparities in New Orleans before Katrina, and created uncertainty for residents, businesses, non-profit organizations, and developers in making rebuilding decisions. Neighborhoods such as Broadmor and Village de L'Est have taken rebuilding into their own hands and shown enormous progress. These neighborhoods demonstrate one of the great signs of hope in New Orleans--the awakening of civic engagement and community organization that provides critical social and psychological capital for rebuilding.

However, neighborhoods can only go so far on their own and many neighborhoods have not tapped into the philanthropic and university resources that have fueled grass roots rebuilding.

The result is increased inequality since Katrina in access to resources and the foundations of viable neighborhoods. Access to groceries is a case in point. New Orleans experienced a decline in supermarkets before Katrina with one supermarket per 12,000 people in 2005 versus one per 8,800 nationally. By 2007, there was only one supermarket per 18,000 residents with most stores in the higher income neighborhoods along the Mississippi river.

An alternative strategy of coordinated investment to rebuild neighborhoods recognizes that neighborhood viability is not a condition to be proven by residents but the result of collective decisions and actions by residents, businesses, government, and non-profit organizations.

City government can lead this collective response and catalyze other parties to return and invest by coordinating its response to reopen schools, restore basic services, and rebuild infrastructure. Moreover, it can target these investments where the market is not supporting grass roots rebuilding efforts and a catalyst for rebuilding is most needed.

The impact of leadership in restoring core services is demonstrated by the city's Catholic school system. The Archdiocese of New Orleans prepared a master plan for reopening schools five months after Katrina. Neighborhoods in which Catholic schools reopened experienced much higher residential rebuilding rates than neighborhoods in which a school did not reopen--twice as high within a 1/10 mile radius of the school and 36 percent higher within a quarter mile.

Strengthening the institutional capacity for rebuilding is another critical agenda. Louisiana and New Orleans lack the strong community development system found in other cities whereby the private sector, city and state government collaborate to build the capacity of community-based organizations and aggregate financing for affordable housing, economic development and community facilities.

Now more than ever, in the face of a recession and uncertain capital markets, New Orleans needs a first-class community development system if it is to translate the civic activism in its neighborhoods into more equitable and substantive rebuilding. Strong leadership and collaboration from the state, city and private sector are needed to lay the foundation for such a system.

The fate of New Orleans is a critical national project to restore the health of a city and region with great historic, cultural and economic value. It also leads the way to establishing a new federal policy and national public-private partnership to reinvest in our urban neighborhoods as the cornerstones of healthy, equitable and environmentally sustainable cities.