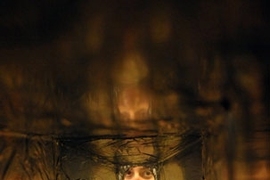 ↓ Download Image
Caption: An inside view of a neutron detector in development at MIT's Laboratory for Nuclear Science. Pappalardo Fellow Jocelyn Monroe, is seen through the detector.
Credits: Photo / Donna Coveney

Caption:
An inside view of a neutron detector in development at MIT's Laboratory for Nuclear Science. Pappalardo Fellow Jocelyn Monroe, is seen through the detector.
Credits:
Photo / Donna Coveney

Several research projects are underway to try to detect particles that may make up the mysterious "dark matter" believed to dominate the universe's mass. But the existing detectors have a problem: They also pick up particles of ordinary matter -- hurtling neutrons that masquerade as the elusive dark-matter particles the instruments are designed to find.

MIT physicist Jocelyn Monroe has a solution. A new detector she and her students have built just finished its initial testing last week at Los Alamos National Laboratory. When deployed in the next few months alongside one of the existing dark-matter detectors, the new device should identify all of the ordinary neutrons that come along, leaving anything else that the other detector picks up as a strong candidate for the elusive dark matter.

"Dark matter experiments are very hard," explains Monroe, who worked on the project with undergraduates Dianna Cowern and Rick Eyers and with graduate students Shawn Henderson and Asher Kaboth. "They are looking for a tiny signal, from a phenomenon that happens very rarely," namely the collision of a dark-matter particle with one of ordinary matter, producing a tiny, brief flash of light.

Such flashes can be detected by putting a tank of liquid deep underground to shield it from most stray particles, then lining the tank with photomultiplier tubes that can pick up even the faintest bursts of light.

The problem is, even buried a mile underground, calculations show such detectors will pick up far more collisions from particles of ordinary matter than from those made of the still-unknown particles of dark matter. To be precise, the ordinary collisions should happen about 10 billion billion times (19 orders of magnitude) more often than the dark-matter collisions. So learning how to rule out those ordinary collisions is the key to finding the unknown matter.

"We're really trying to characterize the background," Monroe explains. "We're making a precise measurement of the energy spectrum of the neutron background." By understanding the nature and intensity of this background, it will be possible to design more effective shielding material to keep them away from the detectors.

Nobody knows what the dark matter is made of, but astronomers are sure it's there because of the way its gravitational attraction pulls on other, visible matter in space. That allows them to determine just how much of the mystery matter is out there -- more than five times as much as the amount of ordinary matter -- but not what it's made of.

Theorists have come up with a variety of candidates, but the leading contenders are a class of subatomic particles known as WIMPS -- weakly-interacting massive particles. These are the types of particles, including one called the neutralino, which should be detectable by the deep underground experiments.

"I think probably in the next five years, someone will see a candidate" for a dark-matter particle, Monroe says. Although some experiments have already claimed to see possible evidence of dark matter, so far those claimed results "are surprising and unconfirmed," Monroe says, and have not been accepted by most scientists.

To test the new detector, Monroe and her students took it to Los Alamos National Laboratory, where it was exposed to a neutron source so that its sensitivity could be precisely calibrated. Once the analysis of that test is completed, the device will be sent out to an underground laboratory, most likely at the planned Deep Underground Science and Engineering Laboratory. This facility, though not funded yet, would be set up in the Homestake Mine, a very deep old gold mining complex in South Dakota, and one of its multidisciplinary goals is provide the world's deepest location for the detection of cosmic dark matter.

The research is partly funded by the National Science Foundation.