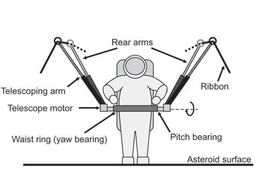 Caption:
Diagram of the system for tethering an astronaut to an asteroid using circumferential ropes.
Credits:
Graphic / Ian Garrick-Bethell

Using a tether system devised by MIT researchers, astronauts could one day stroll across the surface of small asteroids, collecting samples and otherwise exploring these rocks in space without floating away.

The ability to visit asteroids could also be invaluable for testing equipment for a mission to Mars by humans. Further, knowing how to tether an asteroid could be helpful if one needs to be towed away from a potential collision course with Earth, says Christopher Carr, a postdoctoral associate in MIT's Department of Earth, Atmospheric and Planetary Sciences.

Carr and Ian Garrick-Bethell, a graduate student in the department, describe their system in an upcoming issue of the journal Acta Astronautica.

Walking on an asteroid is much more difficult than walking on a planet because asteroids have so little gravity. An astronaut who tried to step onto one would likely fly off or hover above the surface.

Now Carr and Garrick-Bethell say that tying a lightweight rope completely around an asteroid could solve that problem. Once the rope was in place, astronauts could attach themselves to it and maneuver or possibly even walk along the surface.

That would allow an in-depth exploration of the composition and history of asteroids, which could shed light on some of the big questions about our solar system, such as how the planets formed, said Carr.

"This is an innovative approach to a task nobody has spent much time thinking about," said former astronaut Jeffrey Hoffman, an MIT professor of aeronautics and astronautics who sponsored the paper. "NASA has taken a brief look at a human visit to a Near Earth Object, and it may be something we can do long before going to Mars. Clever ideas will be necessary to allow people to do useful work near objects on which you cannot 'land,' but only 'dock.'"

An asteroid's gravity varies depending on its density and size, which can range from a speck of dust to hundreds of kilometers. On an asteroid that has a diameter larger than eight kilometers, an astronaut who jumps will probably come back to the surface, Carr said. But if the asteroid is smaller than that, the astronaut may float away.

Even if an asteroid has enough gravity to keep an astronaut on the surface, it would be difficult to move around or collect samples. "You couldn't touch anything without sending yourself on a new trajectory or spinning yourself around," said Garrick-Bethell, who is the first author of the Acta Astronautica paper.

Some people have suggested that astronauts could bolt themselves directly to the asteroid, but the granular material covering the asteroids could prevent this.

"It would be like trying to bolt yourself to a pile of gravel or sand," Garrick-Bethell said.

The MIT researchers envision deploying their system with an astronaut or a remote-controlled rocket that unwinds a spool of rope while flying around the asteroid. When the craft reaches the starting point, a loop is formed and tightened. Astronauts could then be held to the asteroid using one or more ropes, permitting them to work on the surface.

One unknown is whether the rope would cut into the granular surface of an asteroid, hindering the system's effectiveness. But even if the rope does not allow astronauts to walk on the surface, it could at least give them something to hold onto as they pull themselves along the asteroid without floating away, said Carr.

A version of this article appeared in MIT Tech Talk on September 26, 2007 (download PDF).