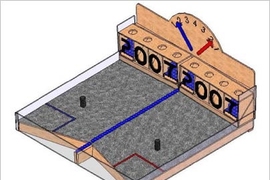 ↓ Download Image
Caption: Drawing of the contest table on which contestants' robots will compete during the 2.007 Robotic Competition to be held May 15-16.

Caption:
Drawing of the contest table on which contestants' robots will compete during the 2.007 Robotic Competition to be held May 15-16.

MIT's Department of Mechanical Engineering will celebrate its annual festival of maximum design and engineering on May 15 and 16 at 6 p.m. in the Johnson Athletic Center. The event is free and open to the public.

Design 2.007, as the contest is known, offers an exciting two-night elimination tournament in which robots built by students in Course 2.007 (Introduction to Design and Manufacturing) compete in performing pre-assigned tasks on a table packed with ghastly challenges and giddy scoring opportunities. Each contest table holds two competing robots.

This year's contest, titled "2.007 in 2007," required students in the course to design, build and "ship" a robot that can carry a load of street hockey balls across a "field," dump the balls in a bin, then commence what looks like a minesweeping operation to collect and dump a stack of hockey pucks and yes, more street hockey balls.

As in all other years, robots are student-designed and driven, and each must score before engaging with an opponent.

At the beginning of the semester, students in 2.007 are given a kit of materials and asked to design a robot to accomplish a certain task.

Students develop a concept, make computer models and foam mockups of their concepts, engineer the details, build their machines and have them ready to "ship" in time for the final event on May 15 and 16. Machines must conform to given size and weight requirements.

For more information, go to: pergatory.mit.edu/2.007