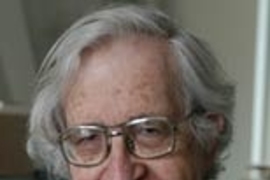 Speaking just one day after the Feb. 14 bombing in Lebanon that killed former Lebanese Prime Minister Rafik Hariri, MIT Institute Professor Noam Chomsky addressed the role of the U.S. in the Middle East before a standing-room only crowd in the Stata Center's Kirsch Auditorium.

The second in a series of three talks on Lebanese-Syrian relations sponsored by the Lebanese Club at MIT, Chomsky's talk drew more than 400 people.

Originally scheduled for Room 141, which only seats 100, the lecture was moved to Kirsch in order to accommodate the large crowd.

"Yesterday does not mark the assassination of a man, but of a nation's vision and a generation's hope," read Loai Naamani, president of the Lebanese Club, from a prepared statement just before Chomsky's talk. The club held a moment of silence to honor the slain leader.

Chomsky called upon the audience to "deplore all acts of terror," like the one that killed Hariri and 16 others, but he also pointed to another major bombing in Lebanon 20 years ago that killed 80 people. Despite that bomb's devastating nature, word was never spread in the United States. The bombing was traced back to the CIA and so "is not part of the record of terrorism," Chomsky said. It became "unacceptable history."

Touching upon both the current Iraq war and the Israeli-Palestinian conflict, Chomsky' talk generally centered on the role of the U.S. in the Middle East. By and large, he said, events deemed to be outside of U.S. interests or that cast the U.S. in a bad light are either vastly underreported or simply ignored. "If reported, the events are typically explained away in terms of the Cold War or some other pretext, which rarely survives close analysis when we investigate carefully on a case-by-case basis."

Chomsky also pointed to several cases in which the media ignored the truth in order to make the U.S. look good. He pointed to the recent elections in Iraq, which were not initially supported by the U.S., though the public spin suggests the contrary. "The elections were presented as a U.S. initiative," said Chomsky.

In general, Chomsky called for a better flow of information to and from the media, especially as it reflects popular opinion. "Politics and public opinion are just totally divorced," he said.

The talk offered a unique perspective on U.S. and Middle Eastern relations, said Naamani, who found it moving to be able to mourn the loss of Hariri with such a large audience. "Our plea for justice to be served had the reach and range it deserved," he said.

The series will conclude Feb. 22 with a lecture from Adib Farha, Hariri's adviser for 10 years.