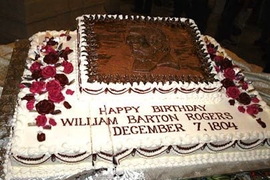 Lobby 7 was filled with an air of excitement and the buzz of kazoos, as a crowd of several hundred gathered last month (Dec. 7, 2004) to celebrate the 200th birthday of MIT's founder and first president, William Barton Rogers. The celebration included remarks by the Institutes' 16th president, Susan Hockfield, a kazoo chorus of "Happy Birthday," a giant birthday cake and festive music from the 19th century.

On her second official day on the job, the new president stood under the watchful gaze of her first predecessor's plaque and reflected on the considerable impact Rogers had on MIT. At a time when science had no influence on college curriculums, "Rogers saw the need for a new kind of academic institution--one that could train students to put the advances of modern science to work for the betterment of humankind," said Hockfield. It is this vision that "set the course that the Institute has followed for nearly a century and a half," she said.

The event, organized by the MIT Libraries' Institute Archives, was an opportunity to celebrate the accomplishments of MIT's founder, reflect on the Institute's history and look to its future. The Institute Archives and Special Collections contains numerous items from MIT presidencie,s including many of the personal and professional papers of Rogers. These documents provide insight into Rogers' background, his connection to the scientific community of the day and his thoughts on establishing MIT. Some of the special items that were on display at the birthday celebration included an 1846 letter from Rogers to his brother Henry outlining a school of practical science, correspondence between family members and colleagues describing their personal and professional lives and travels in mid-19th century U.S. and Europe, and other documents significant to the founding of MIT.

An IAP course celebrating Rogers will be offered this week. To learn more about MIT's founder, attend "In Celebration of MIT's Founder, William Barton Rogers, 1804-1882" on Jan. 27 at 2 p.m. in Room 4-231 or view items from the Rogers' collection online.