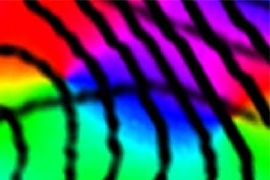 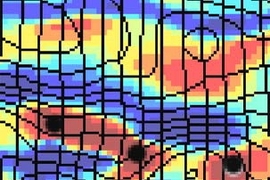 ↓ Download Image
Caption: In these contour maps of the visual center in the brain, variations in color indicate how much individual neurons are oriented toward a particular feature of a visual scene.
Credits: Images / Picower Center for Learning and Memory at MIT

Caption:
In these contour maps of the visual center in the brain, variations in color indicate how much individual neurons are oriented toward a particular feature of a visual scene.
Credits:
Images / Picower Center for Learning and Memory at MIT

When you see a flower, neurons deep inside your brain respond to the flower's color, shape and distance from your eyes, somehow working together to create the flower's image in your mind.

The question for neuroscientists is, how do they do that?

It is known that neurons in the brain are clustered together according to their ability to detect different properties--such as the vertical edge of an object or the horizontal edge, or whether the object is being seen by the left eye or the right.

Recently, neuroscientists at the Picower Center for Learning and Memory at MIT explored how these neuron clusters overlap to communicate visual information. They reported their findings in the July 21 issue of Neuron.

The evidence suggests that multitasking may be fundamental to the way the brain works.

"Since every part of the cortex has neurons that are involved in multiple tasks, there is every reason to think that this is a deep principle of brain organization," said Mriganka Sur, the Sherman Fairchild Professor of Neuroscience and head of MIT's Department of Brain and Cognitive Sciences.

In the visual cortex, neighboring neurons detect objects in neighboring regions of space, creating an image or map of the visual scene. Neurons are clustered according to their ability to detect different properties, but they need to overlap so each combination of features can be represented by the cortex. If the clusters did not overlap with each other the correct way, then we would have "blind spots" for certain feature combinations. For example, in certain regions of the visual scene we might detect vertical edges with only the left eye, or horizontal edges with only the right eye.

A Finnish mathematician tackled this problem in 1982, when he came up with mathematical formulas that showed how the clusters could pull off this overlapping feat.

This study by Sur, postdoctoral associate Hongbo Yu, graduate student Brandon J. Farley, and visiting scientist Dezhe Z. Jin tests the predictions of mathematician Teuvo Kohonen. It does so by factoring in a quirky aspect of some species' cortical map: It's distorted.

What's more, the visual cortex's solution to accommodating several parameters probably holds true for other brain regions. Take hearing, for instance. "Hearing, like seeing, has multiple parameters: location of a sound in space, frequency and relative activation of the two ears," Farley said. "Maybe mapping multiple dimensions this way is a general strategy the brain uses when it faces this problem."

This work was supported by the National Institutes of Health.