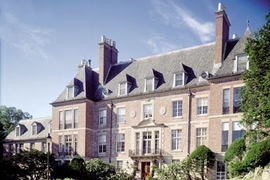 ↓ Download Image
Caption: MIT Endicott House in Dedham is celebrating its 50th year under the stewardship of the Massachusetts Institute of Technology.
Credits: Photo / MIT/Endicott House by Matt McKee

Caption:
MIT Endicott House in Dedham is celebrating its 50th year under the stewardship of the Massachusetts Institute of Technology.
Credits:
Photo / MIT/Endicott House by Matt McKee

MIT is celebrating the 50th anniversary of its ownership and management of the MIT Endicott House in Dedham, Mass., one of the nation's first conference centers, with a yearlong series of events starting this month.

Events will showcase Endicott's grounds and its collection of antiques and art, as well as displays of little-seen Endicott family and MIT photos and memorabilia. A 128-page coffee-table book, "A Home on Haven Street," being published in conjunction with the anniversary, will document in words and pictures the history of the estate and the two manor houses that have crowned its expansive Frederick Law Olmstead-designed grounds and gardens.

The year's activities will include a range of recognition events to honor the house's benefactors, employees and supporters as well as community leaders. Specific dates will be announced as they approach.

"To be the latest link in this property's historical chain is indeed an honor for all of us in the MIT community, but especially for those of us who work at MIT Endicott House every day," said Michael Fitzgerald, general manager of MIT Endicott House. "We're looking forward to honoring the house, its families and the Institute with a year's worth of events that do justice to the house's place in local history and its continued role as a critical part of MIT."

The MIT Endicott House is operated as a full-service conference, meeting and special events destination. It has served as the meeting facility for many MIT departments and has been the primary site of the MIT Sloan School of Management's renowned senior executive program. In addition to serving the MIT community, Endicott House is used by community groups as well as by medical, governmental, nonprofit and corporate organizations.

Endicott House is located on land initially acquired by Civil War Gen. Stephen Minot Weld in the early 1870s. Weld built the first mansion, Rockweld, but in the early 1920s, the estate was sold to H. Wendell Endicott, scion of the family that founded the Endicott Johnson Shoe company. Endicott razed Rockweld and built the Charles Platt-designed French country-style mansion that is on the site today.

Endicott specified in his will that the estate be bequeathed to an educational institution, and the Massachusetts Institute of Technology was chosen as the most suitable steward of the property. The house passed into MIT's ownership on Christmas Eve 1954, and it began its new life as a high-end conference center in July 1955.

Today, Endicott House offers guests old-family elegance with all the modern conference amenities one would expect from MIT, such as wireless Internet access throughout the main buildings and state-of-the-art audio and video equipment.