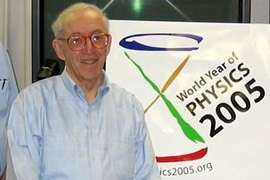 MIT's Haystack Observatory celebrated the World Year of Physics last month with a lecture on "The Fourth Test of Einstein's Theory of General Relativity," a key experiment conducted at the observatory during the 1960s.

The originator of the experiment, Irwin Shapiro, spoke before an invited audience of scientists, engineers, teachers and students gathered at the Westford observatory on June 23. The experiment was conducted at Haystack from November 1966 through August 1967.

"Irwin Shapiro's experiment was groundbreaking in many ways and represented a fundamental physics experiment that was the most important discovery made using the Haystack antenna," Salah said.

Astrophysics was a burgeoning field back in 1962 when Shapiro first got the idea for his experiment. According to Einstein's theory, the speed of a light wave depends on the strength of the gravitational force along its path. The test involved measuring the time delays between transmission of radar pulses through the sun's gravitational field toward Venus or Mercury, and measuring the time it took the echoes to return to Earth.

Unfortunately, at the time that Shapiro proposed the test, no radar existed that could bounce a signal off an object 130 million miles away and have it return at any measurable level.

However, in 1964 MIT unveiled the 120-foot Haystack antenna, the world's most sensitive antenna at that time. The test was described as "an experiment of unprecedented precision," and Shapiro's team confirmed that the radio waves slowed down ever so slightly as they went through the gravitational field of the sun. To do this they developed a new radar transmitter that could bounce coded radar signals off Venus and Mercury when each lined up to pass behind the sun.

At the time, Shapiro actually expressed disappointment in the results. "In a way, it's kind of every physicist's dream to prove that Einstein was wrong," he said. By getting it right, Shapiro and his team of researchers received national acclaim. The other team members, who all worked for MIT Lincoln Laboratory at the time, were Gordon Pettengill, Michael Ash, Melvin Stone, William Smith, Dick Ingalls and Rich Brockelman.

Shapiro, who lives in Lexington, Mass., is the director emeritus of the Harvard-Smithsonian Center for Astrophysics. The Haystack antenna that he used is about to undergo an $80 million renovation, after which it will once again be one of the finest radio instruments in the world.