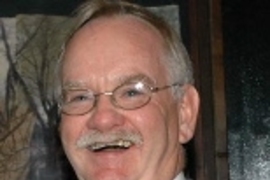 ↓ Download Image
Caption: Provost Robert A. Brown reacts to the MIT surprise party held Monday, June 6, to honor him for his appointment to the presidency of Boston University.
Credits: Photo / Donna Coveney 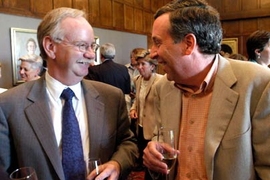 ↓ Download Image
Caption: Provost Robert A. Brown, left, enjoys a surprise party held Monday, June 6, to congratulate him on his appointment to the presidency of Boston University. He is in the Emma Rogers Room chatting with Lawrence S. Bacow, the former chancellor of MIT who now serves as president of Tufts University.
Credits: Photo / Donna Coveney

Caption:
Provost Robert A. Brown reacts to the MIT surprise party held Monday, June 6, to honor him for his appointment to the presidency of Boston University.
Credits:
Photo / Donna Coveney

Caption:
Provost Robert A. Brown, left, enjoys a surprise party held Monday, June 6, to congratulate him on his appointment to the presidency of Boston University. He is in the Emma Rogers Room chatting with Lawrence S. Bacow, the former chancellor of MIT who now serves as president of Tufts University.
Credits:
Photo / Donna Coveney

"This excellent news is the culmination of an intensive, nearly yearlong national search that included direct input from hundreds of faculty members, staff, students, alumni and others within the BU community," said Alan M. Leventhal, chairman of the BU Board of Trustees, in an e-mail sent to BU alumni June 4. "I am proud of the tireless devotion of the search committeeï¿½ï¿½ï¿½. They have found a world-class scholar and innovative leader in Bob Brown."

A professor of chemical engineering who was appointed MIT's provost by former President Charles M. Vest in October 1998, Brown is widely respected, liked and admired by his colleagues at MIT.

"I will simply say that he is the best academic administrator I've ever worked with," said Vest. "He played the key academic management role at MIT during a very complex and important time. His ability to keep budgetary and administrative work focused on the most important academic objectives has served MIT well. His open, personal approach to problem-solving and consensus-building is remarkably successful. He has been a great friend and colleague, and I know that he will flourish as BU's new president and will move them to the next level. BU is fortunate indeed."

Brown, who also holds the Warren K. Lewis Professorship in chemical engineering, has spent his career thus far at MIT, joining the faculty in 1979 as an assistant professor and rising through the ranks to department head, dean of engineering and provost. Although his geographic move will take him just across the Charles River, he said it won't be easy to leave the Institute.

"I am incredibly excited about the wonderful opportunity to lead Boston University, but this excitement is not without some sadness brought on by the terribly difficult act of actually leaving MIT," said Brown. "MIT is a special place because of the quality of its faculty, students and staff, who are all dedicated to a common mission of excellence in everything they do. It has been an indescribable honor to serve this community as provost, dean and department head."

"The faculty, staff and students of Boston University cannot yet know how fortunate they are to have Bob as their new president, but they soon will come to recognize in him all the qualities that have made him such a great leader at MIT," said MIT President Susan Hockfield. "His ability to grasp and convey the essence of complex issues is extraordinary, as is his ability to bring people together to forge new endeavors, whether academic or organizational. I will miss his steady hand here, but look forward to working with him as a presidential colleague.

"Bob has been an extraordinary leader of MIT's academic enterprise," she said. "His vision, insight and judgment on an astounding range of issues are unparalleled, and I have benefited enormously from his wisdom and experience as I embarked on the presidency of the Institute."

As provost, Brown plays a major role in managing the Institute's $2.1 billion budget. In a recent interview with the Boston Globe's business section, Brown said: "The challenges of planning, executing and structuring your assets are every way the same as a for-profit entity. I think in some metrics, they're actually more difficult. We don't have a single metric. We're also very decentralized. We invest in faculty, we invest in graduate students and undergrads, with very long lead times on whether or not these investments were worthwhile."

Brown has served as provost during an unusual seven-year period for the Institute, when an economic downturn caused the endowment to drop right in the midst of a major campus building campaign. About 90 staff were laid off, 140 positions eliminated, and a yearlong salary freeze was put into place for FY 2005. Thanks to these measures, today the Institute is on sound financial footing and work continues on maintaining and improving the campus infrastructure.

During his tenure as provost, the Eli and Edythe L. Broad Institute, a partnership among MIT, Harvard and its affiliated hospitals and the Whitehead Institute for Biomedical Research, was established with the mission to create tools for genomic medicine and pioneer their application to the treatment of disease. Brown also oversaw the Cambridge-MIT Institute, the Dupont-MIT Alliance for biotechnology research, the Singapore-MIT Alliance and many other successful collaborations with industry and universities worldwide.

Recognition for some of the success of the Institute-wide initiative to recruit and retain superb women faculty also goes to Brown, who has been co-chair with Professor of Biology Nancy Hopkins of the Council on Faculty Diversity. Hopkins credits Brown's engineering perspective and creativity as keys to the success of the initiative, saying that by looking at the methodology of institutional processes such as faculty leaves, career development and the faculty search process, Brown was able to identify where problems occurred and introduce solutions. Since 1990, MIT has increased the number of women faculty members from 10 percent to 18 percent.

"I am just in awe of this guy," said Hopkins. "I learned to love and respect engineers by working with Bob Brown. I hadn't really understood how much creativity and also courage is involved in being a great administrator. When he speaks, everyone stops and listens to him. You know that what he has to say will be deeper and more thoughtful than most people's comments."

Chevron Professor Robert Armstrong, head of the Department of Chemical Engineering, recalls a bit about the process of hiring Brown as an assistant professor in 1979.

"He interviewed in March as I recall, right after a spring snowstorm," said Armstrong. "Back then the nearest hotel was the Hyatt, so we put him up there for his visit. To get to the department he had to walk down the sidewalk along Memorial Drive. Of course, with the big snowbanks and melting, the sidewalk was more like a water trough than a sidewalk. Bob said he thought this was a test to see if he could walk on water in order to get a job at MIT. The rest is history."

In a letter to chemical engineering faculty and staff, Armstrong said Brown "has had a profound impact on almost every aspect of the department and Institute. He set exceptionally high standards for teaching and research, as is evident from the numerous teaching awards he won, as well as from the external awards for research that he won: the Colburn Award, the Professional Progress Award and election to both the National Academy of Engineering and the National Academy of Sciences, to name a few. As executive officer and then department head, Bob played a leading role in bringing many of our current faculty to MIT and in ratcheting up the already high standards of the department.

"I suspect that we have all been struck with his seemingly boundless energy and enthusiasm for all that he does and for his endless ability to absorb and digest data. His ability to synthesize creative solutions to difficult problems was refreshing," said Armstrong.

"Bob is a gifted leader," said Alice Gast, vice president for research and associate provost at MIT. "I feel that he has an exceptional ability to understand and be sympathetic to all sides of an issue. He is great at consensus-building and bringing diverse teams together to solve problems. He holds himself and his colleagues to the highest standards of scholarship and integrity.

"His legacy includes greatly enhancing the research environment at MIT, including the building of the Stata Center and the launch of the Broad Institute and the Computational and Systems Biology Initiative," Gast said. "He has done much for the infrastructure and environment that cause research and education to thrive at MIT.

"He is also a great family man and very mindful of the need to balance work and family life. He has shared many personal stories of great outdoor adventures in New England that were wonderful for me as my family and I settled in New England," she said.

Brown and his wife, Beverly, live in Winchester. Their oldest son works in lighting and sound design in Miami. Their younger son will be a senior in physics at MIT next year.

"Bob will make a wonderful president of Boston University," MIT Chancellor Phillip Clay said. "Besides being experienced and very smart, he has a ready ear and a commitment to process that will benefit the university greatly. He cares deeply about quality and rigor, and he cares about fairness and quality of life. He is a wonderful community builder."

A version of this article appeared in MIT Tech Talk on June 8, 2005 (download PDF).