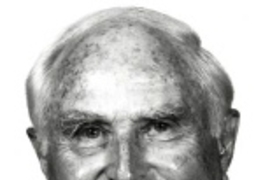 Institute Professor Emeritus Ascher Shapiro of MIT, a pioneer in the field of biomedical engineering and a leader in fluid mechanics research and education, died in his Jamaica Plain home on Nov. 26 of liver cancer. He was 88.

Collaborating with physiologists, physicians and surgeons at Massachusetts General Hospital, Beth Israel Hospital, the Harvard School of Public Health, and the Massachusetts Eye and Ear Infirmary, Shapiro contributed to a number of medical advances, among them the intra-aortic balloon for patients with heart conditions, which allows doctors to use far less invasive techniques in treating cardiovascular problems. Shapiro's knowledge of fluid mechanics and engineering was instrumental in the treatment of blood clots, asthma, emphysema and glaucoma.

Shapiro grew up in New York City and received the S.B. in 1938 and the Sc.D. in 1946 in mechanical engineering from MIT. During World War II, he was the director of a U.S. Navy laboratory that worked on developing turbine propulsion engines for aircraft-dropped torpedoes.

Starting as a laboratory assistant at MIT in 1938, he was appointed an Instructor in 1940, promoted to assistant professor in 1943, associate professor in 1947 and professor in 1952. In 1975, he was named an Institute Professor, the highest honor awarded by the MIT faculty to a faculty member. Shapiro became chair of the MIT faculty in 1964, but resigned that post in 1965 to become head of the Department of Mechanical Engineering. He headed the department until 1974, when he stepped down to devote himself fully to teaching and research. Shapiro became a professor emeritus in 1986.

For the first 25 years of his career, Shapiro's research was focused primarily on power production, high-speed flight, turbomachinery and propulsion by jet engines and rockets. He was a member of the Lexington Project, which helped to evaluate nuclear-powered aircraft. During that time, he invented a nuclear aircraft-propulsion system. Soon after, he directed the Atomic Energy Commission's Project Dynamo, which evaluated nuclear energy as a potential source of civilian electricity production.

As a professor, Shapiro had a profound impact on his students. He was "the ultimate educator I'll ever know," wrote former student Richard Oman of Shapiro in "The Dynamics and Thermodynamics of Teaching," a poem Oman wrote on the occasion of Shapiro's retirement.

Shapiro's impact on fluid mechanics and engineering education was worldwide. In the early 1960s, he produced a series of 25 films on fluid dynamics, a number of which he wrote and appeared in. Those films have been watched in university classrooms around the world. Now digitized and remastered, the lecture series is still in wide use today.

"Producing those films was one of the joys of his life," said longtime friend and colleague, Ronald Probstein, the Ford Professor of Engineering Emeritus in MIT's Department of Mechanical Engineering.

Shapiro made many educational contributions to the Technion-Israel Institute of Technology as a member of the board of governors, a position he held from 1968 to 1989. He held 13 patents, published 130 technical articles and wrote several books. His two-volume treatise, "The Dynamics and Thermodynamics of Compressible Fluid Flow," was published in 1953 and 1954. The first volume is still in print today and has been translated into several languages.

"He was a very good-humored individual," said Probstein. "He could often be seen in the society pages. He was really at the center of Boston life outside of academia." An avid tennis and squash player, Shapiro also enjoyed dancing and sailing.

"MIT was central to his life," said Shapiro's daughter, Martha Margowsky, of Los Angeles. Additionally, he enjoyed a close relationship with his two grandchildren, Margowsky said. Shapiro and grandson, Jonathan Barlev, now 25, had similar interests and often shared books. His grandaughter Valery Handel, 15, plays the silver flute her grandfather bought for himself more than 65 years ago.

Shapiro is survived by his third wife, Kathleen, of Jamaica Plain; his daughters, Margowsky and Mary Handel of Jerusalem, and his son, Peter of Morgantown, W.V., all from his first marriage to Sylvia Charm; his two grandchildren, both of Jerusalem; and three stepchildren in Canada--Scott Larke of Victoria, Leslie Waters of Toronto, and Jennifer Bast of Georgetown.

A memorial service is being planned for next year.

A version of this article appeared in MIT Tech Talk on December 8, 2004 (download PDF).