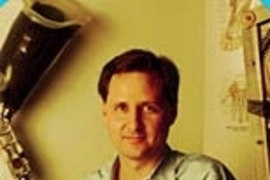 An MIT professor and colleagues from Brown University and the Providence Veterans Affairs Medical Center have begun a five-year, multidisciplinary research project to restore arm and leg function to amputees.

The work will receive $7.2 million in funding from the Department of Veterans Affairs (VA). At the end of the project, the scientists hope to have created "biohybrid" limbs that will use regenerated tissue, lengthened bone, titanium prosthetics and implantable sensors that allow an amputee to use nerves and brain signals to move the arm or leg.

The aim is to give amputees better mobility and control of their limbs and reduce the discomfort and infections common with current prosthetics.

The MIT research, led by Assistant Professor Hugh Herr, is aimed at making artificial legs perform like biologicial ones. He and his colleagues will focus on creating active knees and ankles controlled by an amputee's own nervous system and powered by muscle-like devices.

Currently, prosthetic knees and ankles can stop movement but cannot fuel it. Herr will build joints that can create the mechanical force needed to walk and climb without falls or fatigue.

To create proper knee rotation and propulsion, Herr will use special fluids that solidify into a paste when passed through a magnetic field, then reliquify when the energy is removed. Force will also be controlled by a tendon-like spring powered by an electric motor. The ankle system will either use a similar spring or an artificial muscle, made of electroactive polymers, which turn electrical energy into mechanical work.

To control these joints, Herr will use the BION (TM), a wireless microchip about the size of a grain of rice, developed by the Alfred Mann Foundation. The chips will be injected into existing leg muscle, where they pick up signals from nerves and send movement instructions to the knee and ankle. Additional sensors, attached to the heel and forefoot of an external prosthesis, will relay information about ground reaction forces to a microprocessor to further guide movement of the artificial joints.

A version of this article appeared in MIT Tech Talk on December 15, 2004 (download PDF).