A look back at 10 years of sheltering CASPAR 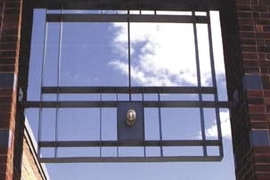 MIT administrators and City of Cambridge representatives looked back with satisfaction on the occasionally intense siting process for the CASPAR homeless shelter at a celebration Nov. 10 honoring the shelter's 10th anniversary. Officials spoke of their remembrances of the process and offered gratitude for the outcome, but the real message of hope came from Leona Bennett, a former shelter client who is now an employee of CASPAR.

"CASPAR Emergency Service Center was my home for over four years--first in the trailers, and later in the new shelter facility. As an unsheltered homeless woman, I was made to feel like a subhuman species, as if I somehow deserved what I had become," said Bennett. "The [shelter] offered me what no other shelter provides: a safe place for those afflicted with the disease of addiction. It was the only door that was never shut in my face."

Reaching agreement on a home for the shelter in 1994 required town and gown cooperation involving the City of Cambridge, MIT, representatives for the homeless, and Cambridge residents, all of whom had a stake in the decision. (CASPAR stands for Cambridge and Somerville Program for Alcoholism and Drug Abuse Rehabilition.) It was finally built on MIT land at 240 Albany St., adjacent to the MIT campus. The celebration was held at the Sidney-Pacific Graduate Residence at 70 Pacific St.

"It is fitting that this event is taking place here... not simply because of its proximity to the shelter, but because of the work that is being done here by our student leadership and the shelter staff to educate students about homelessness and all the issues that surround it and to recruit ever more volunteers," MIT President Charles M. Vest told the celebrators, as he recalled the early negotiations, which occurred not too long into his tenure as MIT leader.

"When I think back to the shelter's siting process, I am still struck by the level of turbulence that was caused by the many divergent, yet valid, views of how we in our city should respond to this crisis.

"It was clear to me and to many around the Institute that a solution was imperative, and that MIT was going to have to play an important role along the way, but I wasn't sure how we would, or should, arrive at that resolution. In the end, the unique agreement we came to was regarded as a first. But the form of the agreement was not the important thing. What really mattered was the goal: that those who needed these services would be able to receive them in a professional and supportive, caring setting," Vest said.

Cambridge City Manager Robert Healy thanked the MIT administrators who were key to sheltering the shelter on MIT-owned land.

"I want to personally thank Chuck Vest for siting and saving CASPAR. Your commitment to the entire community of Cambridge is much appreciated," said Healy. "With the cooperation of MIT, including Ron Suduiko, Paul Parravano, Sarah Gallop and Phil Trussell, we worked and worked and worked to find a solution."

"CASPAR is about helping others, real people. It's not about the number of beds, but about the people occupying them," said Mayor Michael Sullivan.

Offering proof of Sullivan's sentiments, Bennett spoke to the crowd about her transforming experience from a homeless woman to a self-confident advocate for the homeless.

"The new shelter gave me a schedule, a purpose of time which my life on the streets had stolen from me," said Bennett. "Treatment began at the shelter with little things, fulfilling simple, basic needs, which helped make me feel alive. It was not until later that I realized that keeping me indoors and feeding my self-esteem was part of the staff's master plan. 'Leona, could you help with the laundry? Leona, would you sit with this intoxicated woman?' I began to realize that I was not helpless, and I felt the will to live and become the woman I was growing into.

"The staff were always nonjudgmental and available around the clock with words of understanding, compassion and encouragement. The staff understood the impact of the disease of addiction in a way that neither my family nor friends did. They gave me hope and believed in me.

"I am now a dedicated women's advocate, a full-time counselor at CASPAR's Womanplace, a residential treatment program for women of which I am a proud graduate, and an undergraduate student at Cambridge College.

"Any hope for tomorrow must begin with life today, and CASPAR offers that hope," she said.

A version of this article appeared in MIT Tech Talk on November 17, 2004 (download PDF).