Urban planning entry may be ahead of its time 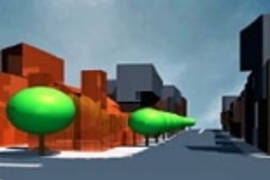 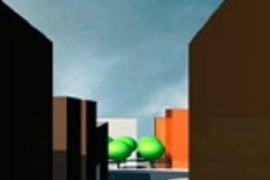 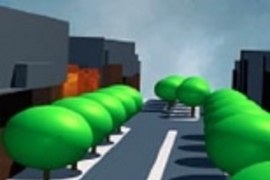 ↓ Download Image
Caption: Computer renderings of an MIT team's plan to redevelop a mixed-use site between the Capitol and the Anacostia River in Washington, D.C.

Caption:
Computer renderings of an MIT team's plan to redevelop a mixed-use site between the Capitol and the Anacostia River in Washington, D.C.

Their proposal was progressive--maybe too progressive for the judges in the Urban Land Institute's Gerald D. Hines Student Urban Design Competition.

A team of five MIT graduate students placed third in the competition finals on March 21 out of an initial pool of 45 teams from 26 universities, including four other MIT teams. The third-place prize was $12,500.

The cornerstone of the team's plan to redevelop a 70-acre mixed-use site between the Capitol and the Anacostia River in Washington, D.C., is what they call an "equitable development process" or EDP, a strategy for gaining use of buildings in the area whose owners don't want to sell, but without resorting to taking by eminent domain.

"EDP facilitates cooperation among landowners and other stakeholders to maximize long-run aggregate land value, make informed choices on the distribution of uses throughout the area, and oversee the proposed master plan," said Susanne Seitinger, a graduate student in city planning.

Neil Irwin of The Washington Post called the plan "a novel idea for current owners of land in the neighborhood: pooling the land into a for-profit community development partnership that would build and maintain public facilities such as parking and common areas. The judges were intrigued, but worried it would be legally impractical."

Team members say this means of land acquisition has never been used in the United States. In fact, the team knows of only one developer who has used similar techniques, in Japan, "one of the largest private real estate developers in the world," said Michael Marrella, a graduate student in city planning.

"They said we had a 'gutsy, professional presentation,'" said Carolina Simon, another graduate student in city planning who put together the team. But the judges went for the approach presented by the Harvard students, who took first place with a more "traditional trajectory--development around an artist's complex," said Simon.

While disappointed in the judges' decision, the students stand by their work.

"It's quite fitting that the MIT project placed social consciousness as the pillar of the design," said Marella. The Department of Urban Studies and Planning (DUSP) considers "the social context in virtually every project in the program. Design doesn't stand alone as an abstract object, but a process in which the social ramifications are considered."

Anthony Guaraldo, an architecture student, and Robert Morgan, who is working toward both an M.Arch. and an S.M. in real estate, round out the interdisciplinary team. Professor Jean De Monchaux of DUSP and Daniel Winny of Lyme Properties advised the team.