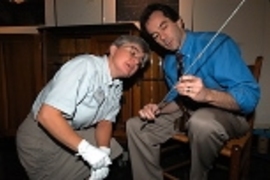 ↓ Download Image
Caption: Deborah Douglas, science and technology curator at the MIT Museum, examines one of the thermometers (held by Professor of Mechanical Engineering John H. Lienhard) stored for more than a century in the chest behind them.
Credits: Photo / Donna Coveney 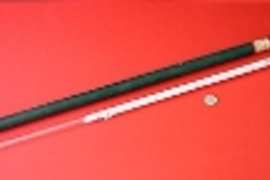 ↓ Download Image
Caption: This 18th-century thermometer and its case are about two-feet in length.
Credits: Photo / Donna Coveney

Caption:
Deborah Douglas, science and technology curator at the MIT Museum, examines one of the thermometers (held by Professor of Mechanical Engineering John H. Lienhard) stored for more than a century in the chest behind them.
Credits:
Photo / Donna Coveney

Caption:
This 18th-century thermometer and its case are about two-feet in length.
Credits:
Photo / Donna Coveney

When the MIT Safety Office made a clean sweep of mercury thermometers at the Institute last year, Professor John H. Lienhard of the Rohsenow Heat and Mass Transfer Lab in mechanical engineering offered the MIT Museum a piece of institutional history. His lab had owned a wooden cabinet full of beautiful old mercury thermometers since the late 1800s, when his predecessors in heat measurements had acquired them back when the campus was across the river in Boston.

In those days, before physicists were able to cool sodium gas to half-a-billionth of a degree above absolute zero, physicists relied on thermometers like these to measure the world around them. As physics moved from mechanics to quantum physics, the Heat Measurement Lab (as it was called then) and its thermometers moved to the Department of Mechanical Engineering--a natural shift because mechanical engineers had worked with heat measurements since the earliest days of the Institute. As time went on, glass thermometers were largely superseded by thermocouples and resistance thermometers for most experimentation. As a result, the thermometers and their cabinet gathered dust in Lienhard's lab.

Now Deborah Douglas, the curator for science and technology at the MIT Museum, has freed the glass tubes from the cabinet--at least temporarily. She passionately described the special qualities of each during a lunchtime show-and-tell called an "Object Lesson" at the museum on Sept. 17. These curator talks featuring different artifacts of the museum are held monthly.

"This was a time when physics really meant physics--when physicists wanted to feel and touch and taste and see the physical world, when the periodic table was being invented, when people were measuring everything. And temperature was a really key thing to measure," said Douglas.

Holding up a very slender five-inch glass tube in her cotton-gloved hand, she said, "This little one could measure temperatures from zero to 200 degrees Centigrade."

Laying that one aside, she carefully chose a two-foot-long tube about half an inch in diameter. "This one measures only five degrees. It is the most accurate mercury thermometer ever invented," she said.

Douglas guesses the Beckman thermometer is worth between $2,000 and $3,000. The entire collection of 18th-century thermometers could be worth up to $50,000, but "antique thermometers are only rarely available for sale, so it's hard to get a handle on the exact value," she said.

She went on to explain that the British-made thermometers had the numbers etched on the outside of the glass, while those made in France and other places on "the continent" had a milky white scale enclosed in the tube. Other clues about the thermometers' origins are etched on the back; many were hand-signed by the craftsman, especially those that predate the 19th century, she said.

Each thermometer has a case, the oldest ones made of brass. Because they had to be shipped to the National Bureau of Standards every couple of years for recalibration, most of the brass or cardboard tube cases have stickers indicating the date of the most recent calibration. Some also contained notes on use of the instrument.

Seven of the thermometers are on display in a permanent exhibition called "Mind and Hand: The Making of MIT Scientists and Engineers."

Mercury thermometers--narrow tubes of glass containing a thin capillary of mercury--are now considered archaic and even dangerous. But during the time of MIT's founding, these thermometers were vital tools for physicists who wished to measure the things they could feel, touch, taste and see.

Oddly enough, the digital thermometers that replaced them aren't always as accurate as their ancestors, but they are safer and more practical; they don't shatter and they don't contain a highly poisonous substance.

A version of this article appeared in MIT Tech Talk on September 24, 2003.